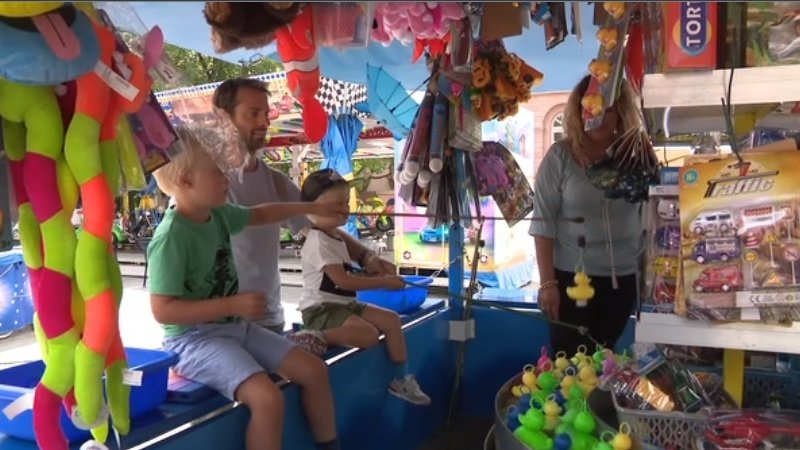 After the 2003 convention, intangible heritage phenomena have been valued alongside tangible objects, such as valuable artefacts in museums. Luxembourg's intangible cultural heritage includes traditions such as the Schueberfouer, the Eemaischen, the Echternach hopping procession, and the Octave procession.

A well-known example of intangible cultural heritage, the Kermesse

One of the better-known examples of intangible cultural heritage is one we see every year, namely the Kermesse festivals. One of the highlights of the Kermesse is the duck fishing stand, loved by many children. One of the people who fondly remembers duck fishing from her childhood is Rosanna Folcarelli. Folcarelli returned in 2019 and has since married into the Clement family, a family renowned on the funfair circuit over several generations.

The Clements are not only a mainstay of the Fouer, but can also be found at many Kermesse festivals. The tradition remains alive, in line with the motivation of the families involved. One of the reasons duck fishing is so popular is that it is accessible to both children and adults. The game is beautiful in its simplicity.

According to Dondelinger, intangible heritage is made out of traditions, ceremonies, and specific knowledge relating to nature and artisanal crafts. This last point is especially important, given that citizens consider it as their cultural heritage and feel a sense of identity and creativity.

The Schueberfouer is the largest protected funfair in Luxembourg. The importance of the Fouer becomes clear when you meet Shirley Clement, who has inherited her aunt's stand. This cultural heritage mainstay has endured since 1340 and passed from generation to generation. Dondelinger said the Fouer is a prime example of intangible cultural heritage, as it demonstrates continuity in Luxembourg and the wider region. Everybody knows that once the Schueberfouer begins, the summer starts to come to an end.

However, the number of Luxembourgish showmen is constantly falling, leading to the question as to why the smallest Kermesse fairs are not protected. These fairs should be added to the inventory, but only if they're still considered living traditions. The inventory is also a collaborate process: all communities believing they are part of an intangible cultural heritage, still practice their tradition, and do so on Luxembourgish territory should contact the Ministry of Culture to help them in their endeavour to share their knowledge.