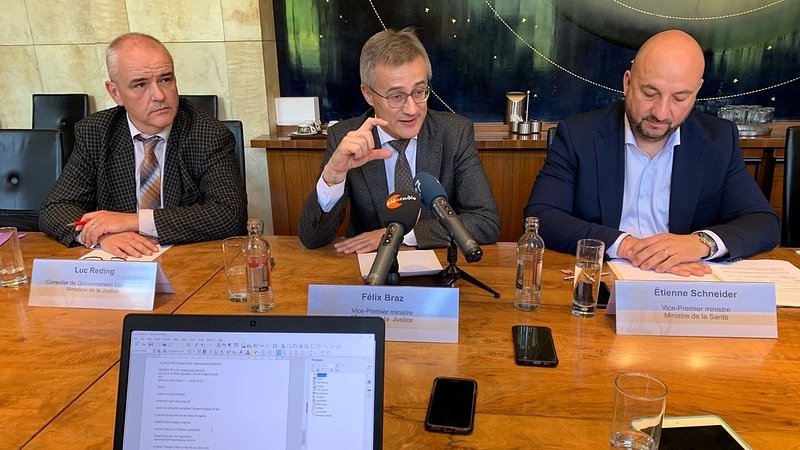 While a preliminary concept should be established by next autumn, there is no definitive date set for the introduction of a bill.

Legislation on the recreational use of cannabis should however still come into force during this legislature.

Health Minister Étienne Schneider and Justice Minister Félix Braz visited Canada in order to get an idea of ​​that country’s model. However, other national systems – such as those in Portugal, the Netherlands and even Uruguay – will also be analysed so as to develop a solution specifically adapted to Luxembourg.

According to Etienne Schneider, a ministerial task force will be necessary to ensure a future plan based on a comprehensive approach to public health.

The legal age limit to buy and smoke cannabis in Canada is 18 or 19 years depending on the province. A 30g cap exists both on the amount people are allowed to purchase, as well as the amount that they are legally allowed to have on their person.

How these laws will look like in Luxembourg is unclear: regulations regarding decriminalisation, consumption, purchase or ownership have not yet been specified.

The ministers visited the Canadian Centre on Substance Use and Addiction, the Canadian Institutes of Health Research, and a major production site where new technologies facilitate the regulation of each individual step of the process. Specific licences will also authorise the production and sale of cannabis in Luxembourg, and Schneider affirmed there will be strict conditions in place.

Since Luxembourg wants to avoid "cannabis tourism", sale will be allowed to residents only. Further regulations, controls and police procedures are to be introduced in order to ensure this.

The goal is not to promote cannabis, but to move consumers away from the black market and limit dangerous consequences. In Canada, it took only 6 months for 43% of the market to follow a legal path.

A minimum age limit of 18 years risks younger people trying to access the drug on the black market, where levels of THC (the active psychoactive substance) tend to be higher: this outcome is to be prevented by all means possible. As follows, the sanctions on selling drugs to minors are to be increased significantly.

Money raised by taxes on the sale of cannabis will be invested in the education around, and the prevention and management of, addiction within the country.