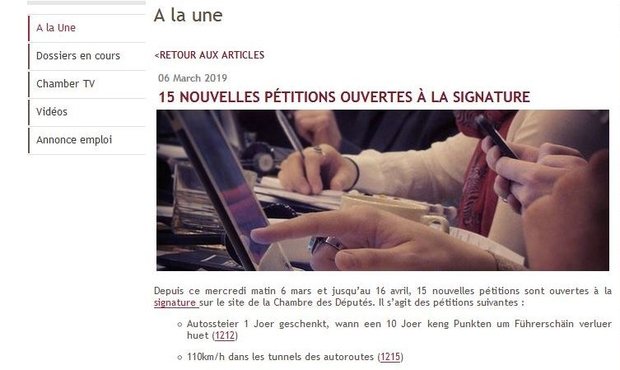 From this Wednesday onward, 15 new petitions can be signed on the website of the Chamber of Deputies. Many of them relate to cars.

One petitioner requests the right to carry either a handheld gun loaded with blanks or pepper spray for the purpose of self-defence.

A further petition demands that people with a disability should be entitled to bring service animals anywhere without facing discrimination.

Another petition asks that children, following a divorce, should take turns living with each parent. The condition would be that both homes would be within an acceptable distance of the infrastructure used by the child.

A woman who is concerned about children's health requests better organisation of emergency appointments for paediatricians. Additional appointments should be added and the waiting times should be reduced. In addition, she requests the creation of a website where you can check how long you will have to wait for an appointment.

A stand against climate change is the proposed introduction of 2 car-free Sundays per month, as was the case in the 70s. Public transport should run as usual on those days and people who disregard the rule should be punished.

A further petition demands a referendum on whether public transport should be made free or not.

Another petition about transport requests that fuel prices should not be adapted to match the prices abroad. A different petitioner asks for the introduction of a vignette for Luxembourg's roads. This would reduce CO2 emissions caused by transit traffic and avoid that residents are punished by the reduction of the mileage allowance.

A third person requests a 110 km/h speed limit in tunnels, such that people could reach their destinations more quickly and dangerous manoeuvres could be avoided. Another person wants to be able to get the technical control for the car done abroad and have the control recognised in Luxembourg.
People who have not lost any points on their license over a period of 10 years should receive a little gift, suggests another petition: they should not have to pay their car tax for 1 year.

People who get caught by radars should have their photos sent to them or be able to view them online. The law from 25 July 2015 should be adapted to accommodate this.

CFL should be forced by law to take responsibility to get their passengers to their destination and that they would have to get them on alternative means of transport if need be.

One petition concerns Irgäertchen and the catastrophic traffic situation around Contern and Sandweiler. The logistics zone should be better connected with the motorway.