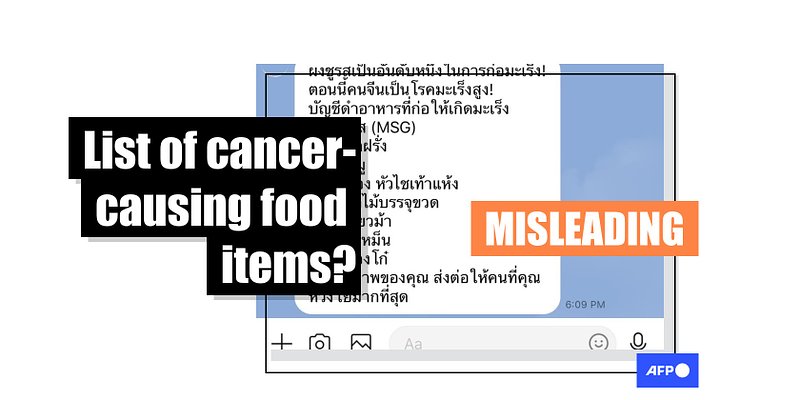 A list of eight ingredients and food items has been shared in multiple Thai-language social media posts alongside the claim they cause cancer. But the claim is misleading: health experts told AFP that the items have not been proven to be carcinogenic. 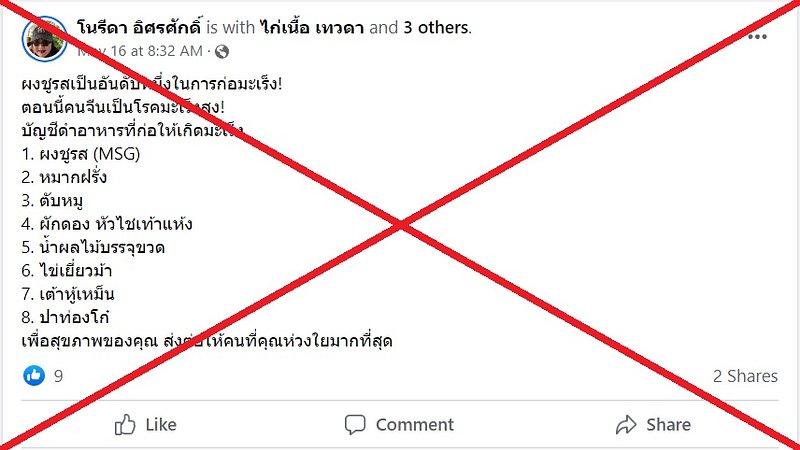 The same claim was also shared on Facebook here, here and here as well as on the messaging app Line.

"The items mentioned here are all Thai delicacies," reads another comment.

Not based on evidence

According to the US Food and Drug Administration, monosodium glutamate (MSG) is "generally recognized as safe".

It says on its website that although "many people identify themselves as sensitive to MSG, in studies with such individuals given MSG or a placebo, scientists have not been able to consistently trigger reactions".

Nattha Pipopchaiyasit, head of the Nutrition Science Group at the National Cancer Institute of Thailand, told AFP that "there is no item on this list which, by itself, is proven to be a cause of cancer."

She added that there are items on the list that should be eaten in moderation.

"MSG can be classified as a type of salt so we must be wary of our sodium intake," she said. "Consuming too much fried food is not recommended and fermentation can increase the salt content."

Nicha Zungsontiporn, a lecturer from the oncology division of Chulalongkorn University and The King Chulalongkorn Memorial Hospital, also told AFP that the claim is "not based on scientific evidence".

But Nicha noted that pickled vegetables are considered a possible carcinogenic agent by the International Agency for Research on Cancer (IARC) -- the World Health Organization's specialised cancer agency.

The IARC measures the strength of evidence to support a substance's potential for causing cancer, not the probability that cancer will occur.

The agency analysed Asian pickled vegetables in 1993 and found conflicting evidence from several studies on the association between the food and cancer types.

"There is limited evidence in humans for the carcinogenicity of pickled vegetables as prepared traditionally in Asia," reads the report.

As of June 21, none of the other seven items on the list in the misleading posts appears in the IARC's database.

Sure and Share, fact checkers with the Thai news agency MCOT, also debunked the claim in November 2020.