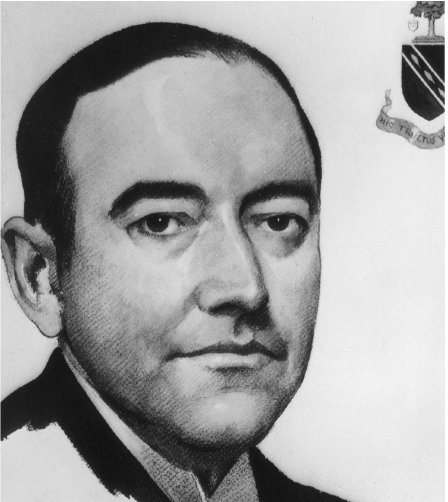 We’ve previously covered Luxembourg during the Second World War in a number of articles (and podcast episodes), from the deportation of the Jewish community to the conscription of young Luxembourgers into the Wehrmacht and the morbid fate of the Grand Ducal family.

Today, though, we’ll be delving into a different aspect of the German invasion of Luxembourg: namely, through the eyes of an American diplomat who did his absolute best to protect the Grand Duchy from the Nazis.

George Platt Waller was born in Montgomery, Alabama in 1889.

An upper-class Southerner, he studied at the University of Virginia, before deciding to become a diplomat.

Waller was initially posted to Canada, before spending parts of the First World War in the Austro-Hungarian Empire and Greece.

In the interwar years, Waller travelled across the world, with postings in Japan, Germany and Honduras, before he was appointed the American chargé d’affaires in Luxembourg in 1931.

Waller would remain in the Grand Duchy until 1941, when he was forced to leave the country.

They Never Found a Quisling

Waller’s story, and his views of Luxembourg, could easily have been forgotten, but in 1942 he wrote a memoir recalling his experience of the wartime years in the Grand Duchy.

The book was titled They Never Found a Quisling, reflecting the fact that no well-known Luxembourgish public official betrayed the Grand Duchy by leading a Nazi-aligned government, as Vidkun Quisling had done in Norway.

Waller’s memoir was never published during his lifetime, but was recently re-discovered by two scholars who published an annotated version of the book in 2012.

This version, called Defiant Diplomat: George Platt Waller, is highly recommended for all those wanting to get a picture of those turbulent times in the Grand Duchy and is available online.

So what’s it all about?

They Never Found a Quisling starts with an idyllic depiction of pre-war Luxembourg, which Waller sees as being close to paradise, led by the saintly Grand Duchess Charlotte.

The author also maintains that Luxembourg is an independent country, neither German nor French, and claims that the language is more closely related to English than any other.

Waller was present in Luxembourg during the early months of the Second World War, sometimes known as the ‘Sitzkrieg’, describing the tension across the country.

When the Germans finally invaded in May 1940, however, Waller did not accompany the Luxembourgish government into exile; instead, he decided to remain as a witness in the Grand Duchy.

Life under the Nazis

Under the German occupation, Waller held a difficult position due to the American government’s official neutrality in the conflict.

At one point, an RAF officer who had been shot down over Luxembourg even turned up at Waller’s house while trying to escape. Unfortunately, Waller was not able to smuggle him out of the country, but he ensured the prisoner would be treated well.

Waller had interactions with the Nazi Gauleiter of Luxembourg, Gustav Simon, whose apparent suicide after the war we covered in a previous article.

Another tragic episode Waller witnessed was the foundation of the Volksdeutsche Bewegung, the equivalent to a Luxembourgish Nazi Party, under the schoolteacher Damian Kratzenberg. Waller relayed how Luxembourgers were forced to join the party, being threatened with deportation to Poland if they refused.

Waller’s most important task while he remained in Luxembourg was aiding with the procurement of visas for the Grand Duchy’s Jews.

Up until October 1941, Jews who were either native to Luxembourg or had fled to the Grand Duchy from Germany were allowed to emigrate, but they required visas to do so.

Here, Waller’s work was crucial, as he met regularly with the country’s grand rabbi and hired clerks to process the visas.

Waller also witnessed the attempt to Germanise Luxembourg, through the banning of using Luxembourgish or French words.

Eventually, with relations between the United States and Germany deteriorating, Waller was ordered to leave the Grand Duchy in July 1941, sailing home from Lisbon.

This would not be the last time he would set sights on Luxembourg, however: in 1944, he returned to the Grand Duchy as consul.

Overall, George Platt Waller’s memoir is a brilliant testimony to the tremendous courage showed both by himself and by ordinary Luxembourgers in opposing Nazi rule.