RTL Today contributor Thomas Tutton tells the story of the little-known referendum of 1937, which against all expectations resulted in a stunning defeat.

Last month, we explored the dramatic events of the referendum of 1919, which saw Luxembourgers vote to keep the new Grand Duchess Charlotte on the throne.

And referenda have been an integral part of Luxembourg’s modern history ever since. Over the next weeks, we’re going to find out all about them, starting with the events of 1937.

The referendum of 1937 was inextricably linked with the rise of the Communist Party of Luxembourg (Kommunistesch Partei vu Lëtzebuerg, KPL).

The party had been founded in 1921 after its members split from the Luxembourg Socialist Workers’ Party (the modern-day LSAP).

The KPL failed to make much of an impression in its early years, but at the election of 1934 it achieved an impressive result, gaining 5.2% of the vote. Zénon Bernard was duly elected as the party’s first member of the Chamber of Deputies.

However, the government of Joseph Bech refused to allow Bernard to take his seat, believing him too revolutionary to sit in the Chamber.

Bech also fired two schoolteachers for being members of the KPL. The government was making its intentions clear, and it was now time to up the pressure.

The key element of the government’s anti-communist strategy was a proposed new law, the so-called ‘Law for the Defence of the Social and Political Order’.

However, it has gone done in history under the name given to it by its opponents: the Maulkuerfgesetz, or Muzzle Law. 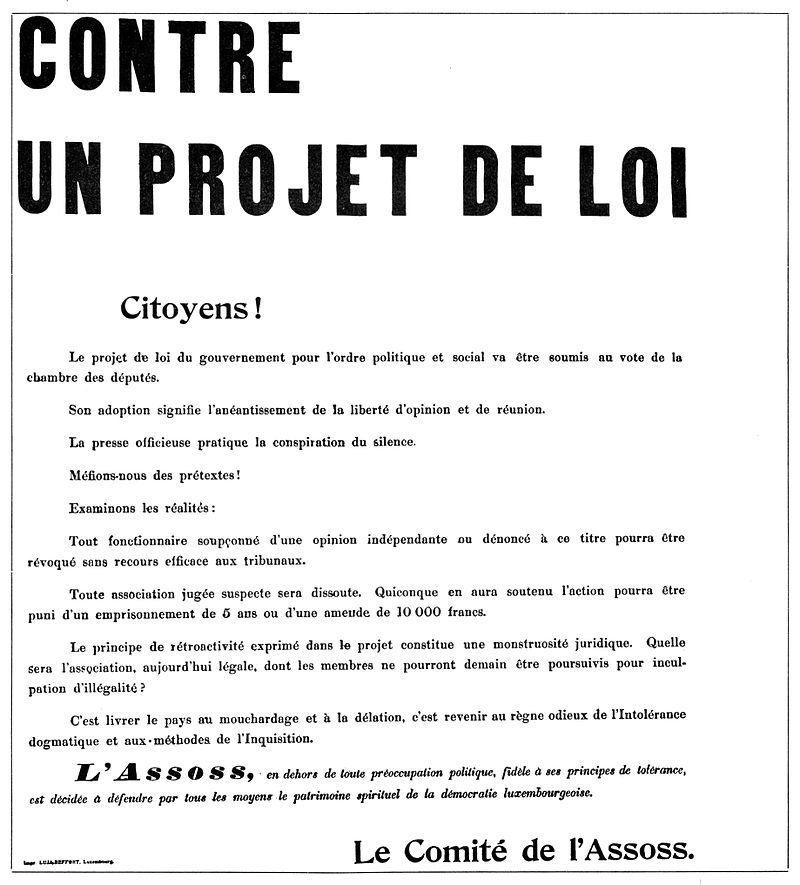 A text opposing the law / © https://commons.wikimedia.org/wiki/Category:Maulkuerfgesetz

It was directly aimed at banning the Communist Party and would have given the government the power to dissolve any other organisation believed to be threatening the Constitution.

The bill was first introduced in 1935, but it was not until April 1937 that it would come to a vote in the Chamber.

The Right Party and the Liberals, the anti-communist parties in the coalition government, both supported the measure, while the Socialists and other minor leftist parties were firmly in opposition, denouncing the bill as authoritarian and even fascist.

After four days of debate in the Chamber, the law was passed by a wide margin, with 34 deputies voting in favour and only 19 against.

But this was not the end of the story.

The passing of the Maulkuerfgesetz led to massive uproar on the streets, with the Socialists and trade unions criticising the government’s actions.

Bech therefore decided to settle the matter once and for all by calling a referendum on the law, believing that the majority of the population outside the main working-class towns would support him.

But this was not simply a domestic affair: the whole of Europe was aware of the growing tensions between Nazi Germany and the liberal democracies, while the Spanish Civil War only elevated this unease.

The Luxemburger Wort campaigned heavily on the government’s side, but the trade unions were able to mobilise large sections on the other side.

The exact question, expressed in both French and German, asked voters:

‘Do you agree with the law mandating the dissolution of the Communist Party and of groups and associations which, by violence or threats, aim to change the Constitution or the country’s laws?

To general surprise, on 7 June 1937 Luxembourg voted to reject the law.

The law was thus immediately dropped by the government.

An incredulous Bech was forced to resign, although he would remain in his post for five months while negotiations over a new government took place.

Luxembourgers had proved their commitment to democracy and opposition to authoritarianism – and the referendum of 1937 deserves to be remembered for this noble reason.