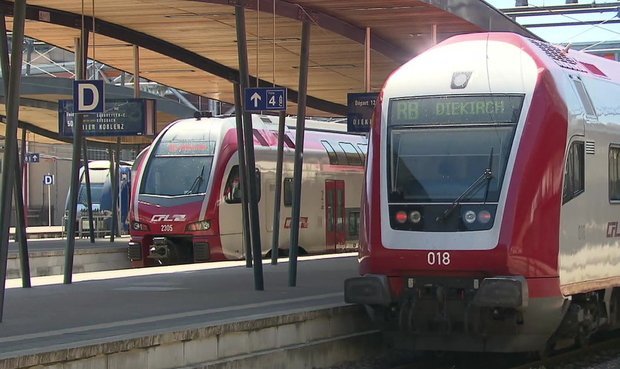 Wondering how to make your way around Luxembourg (the city and country) without a car? We've got you.

Luxembourg, as a wise man* once said, is a very large, small country. Considering it’s only about 82 kilometres long by 57 wide, with a population of around 600,000 people, you’d think getting from A to B would be as easy as pie. It certainly can be, if for instance A is Asselborn and B is Boxhorn – but you’ve probably not heard of either, and chances are your commute will involve going both to and through far more populated areas of the country.

*I should confess that I am quoting myself here, so the ‘man’ part is accurate, ‘wise’ more questionable.

While Luxembourg and its population may both be small (and the roads largely excellent, in rare instances where they are not subject to roadworks), the number of people using our roads is heavily inflated by the fact that nearly 45% of Luxembourg's workforce live in one of the neighbouring countries. This means that around 185,000 people cross the border every day to get to work, the majority of whom live in France, followed by Germany and Belgium (2018 figures).

As you may guess from the above, the roads from France are exceptionally busy during rush hour – but in honesty, so are most of them if you are heading towards areas including the City or Kirchberg, or even need to make your way around them. So how else can you get around the Grand Duchy?

Good news! There's no need to worry about this anymore (unless you wish to travel first class on the train) as all public transport in Luxembourg is free. That includes all buses, trains, the tram, and the funicular.

There is no shortage of public transport options available to you in the Grand Duchy and neighbouring regions, though do note that international travel is not included with the tickets covered above. Rates will vary if you are going across the border, and you should consult a travel office or hotline to find the ticketing option that best fits you needs if you are going to commute cross border.

Buses are operated by VDL, CFL, TICE, and RGTR – though for all intents and purposes it doesn’t much affect you as a customer which company operates which line, as ticket sales are centralised. You can find an overview of the bus lines and full time tables by visiting this page.

Trains in Luxembourg are operated by CFL. As with the buses, it doesn’t matter where you buy your ticket for domestic travel as the system is centralised. That said, it’s not a bad idea to bookmark the CFL website as it’s a good place to go for information on delays and maintenance works. Given that the train lines are undergoing a fair bit of maintenance lately, and the fact that some lines have been affected by strikes in France, it’s worth keeping an eye on. The website also offers full time tables and an overview of the lines available.

The tram currently runs from Luxexpo in Kirchberg to the Luxembourg City train station. The plan is to expand the route considerably in the future, however, with the tram going from Findel (the airport) to Cloche d’Or (past Howald, Bonnevoie, and the train station) – though that will take a bit of time yet. The tram is operated by Luxtram.

Every bit as fun as the name would suggest! This is a bit of a niche mode of transport that is mainly useful to those of us working in Kirchberg, as it runs from the Pfaffenthal train station up to – you guessed it – Kirchberg. That said, I have seen many a family riding up and down for no apparent reason other than the kids’ amusement.

The best way to find out how to get from point A to point B using public transport is to download the Mobiliteit app (Apple, Google), or visit the Mobiliteit website. Both options are free, and allow you to simply type in a start/end point and time of travel and the app/website will show you a list of the options available to you. Couldn’t be easier! Google Maps also offers a similar feature, but I find that Mobiliteit is more reliable – not least if there are unexpected delays or planned maintenance work.

If you don’t have a smartphone you can also call the Mobiliteitszentral directly on +352 2465 2465. They are open from 7am to 7pm Monday-Friday, and 8am to 7pm on Saturdays, Sundays, and holidays.

Luxembourgers love cycling, and know how to dress for the occasion. The country offers lots of stunning cycle rides suitable for both exploration and commuting, but that’s going to have to be the subject of an upcoming article lest this one turns into an encyclopaedia. As cycling has become an increasingly popular mode of transport for commuting and as a pastime alike, the government has made investments aimed at improving the number and safety of cycle paths. While not quite on par with Copenhagen yet, we're getting there.

For now though, let’s focus on getting around the city – where you won’t even need to splurge on a bike of your own! This is thanks to Vel’oh, who operate a network of 75 bike rental stations across the capital – and as if that wasn’t convenient enough, they are in the process of replacing them with electric bikes, so the many hills of our fair city won’t be quite as much of a struggle to get up (but still every bit as fun to go down).

Membership is €15 per year, and includes 30 minutes free rental every time you pick up a bike (after which it’s €1 per hour, up to a maximum of €5 per day). For more information, check out their website.

As the final option in this already rather long article, let’s take a quick look at carpooling. Many of you will be familiar with the concept already, and is essentially involves finding someone else who is going in the same direction as yourself to cut down on costs (and the number of cars on the roads). BlaBlaCar (Google, Apple) has been operating in Luxembourg for quite some time and is probably the most established option. In addition, the sustainable development ministry has recently launched a carpooling app of its own under the name CoPilote (Google, Apple), which is also worth checking out.

That should just about cover it! Do feel free to let us know in the comments or by email if you have further suggestions or any questions, and we’ll look into it.