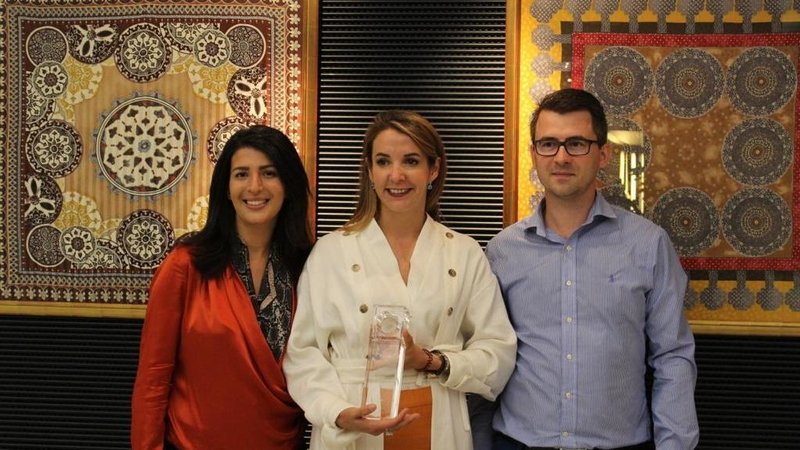 Tessy de Nassau with Aabir Rhardane and Amadeusz Krol of The Leadership Academy. /

We reported earlier this year that Tessy de Nassau was to be the recipient of this year's first annual Leader of the Year award, following on from her receipt of an Honorary Doctorate from the Paris College of Art, which she received in May.

The award ceremony was held yesterday, Monday 9 September, at Hotel Le Royal in Luxembourg City. In a moving acceptance speech, Tessy spoke of the value of leadership, setting an example for others, and spoke of leaders who had both inspired and motivated her personally. During the Q&A after the ceremony, Tessy also stressed the importance of supporting each others; with particular emphasis on women being there for each other in the often fiercly competitive corporate world.

She drew on her own experience both from the military, corporate world, as a former princess, and her development work through instances such as Professors Without Borders.

Tessy gave a particularly moving tribute to the late Grand Duke Jean, of whom she said:

"My late grandfather, his Royal Highness Grand Duke Jean, is my personal inspiring story of a leader. Let me take the stage for the first time since he passed away to publicly say how much he has inspired me; with his love towards me, and my children. His love towards his country and his people, and his love for everything he did.

He was a a man of great kindness, who always listened. Like Kofi [Annan], I personally have never heard him raise his voice or say one bad word against anyone. A leader like the late Grand Duke Jean is rare, very rare, and he will be very much missed by many."