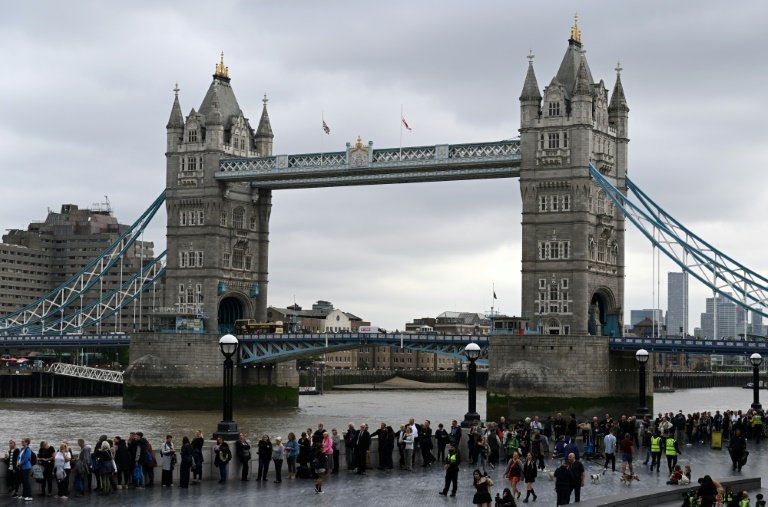 By lunchtime Thursday, the queue was four miles (6.4 kilometres) long and growing / © AFP

Orderly and good-natured, the enormous waiting line to see Queen Elizabeth II's coffin is being hailed as a triumph of Britishness in a country that prides itself on its queuing finesse.

"We British, this is what we do, queue in the rain," Jacob Lovewell, a 29-year-old who works in marketing, told AFP as he waited patiently in the slow-moving file as it snaked alongside the river Thames.

The line, which started forming more than 48 hours before people were first admitted on Wednesday evening, has its own YouTube channel and livestream.

Plastered over newspaper front pages and reported live on television, the length and pace of "The Queue" as it is increasingly known is the new focus of a country in the middle of 10 days of mourning and pageantry. 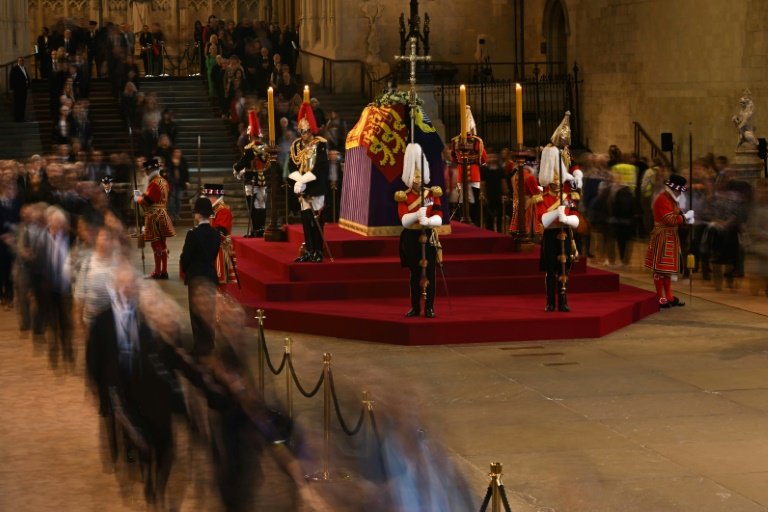 Strict rules forbid photography and loitering in front of the casket, leaving well-wishers with only seconds to pay their respects / © POOL/AFP

By early afternoon Thursday, it was more than four miles long (7.0 kilometres) -- and growing -- with people facing a wait of more than seven hours to glimpse the coffin, which is on display in Westminster Hall until Monday.

"It's brilliant," said Lisa Doodson as she crossed Lambeth Bridge early Thursday, with the spires of Westminster finally in sight. "Everyone's happy... Everyone is so helpful."

Strict rules mean no photography and no loitering in front of the casket, leaving well-wishers with only a few seconds to pay their respects after their trial of endurance to get there.

But those waiting are in good spirits, sharing snacks and chatting to their neighbours in an event of self-sacrifice and quiet socialising.

"If you're British, this is the queue you've been training for all your life. The final boss of queues," one Twitter user, @JofArnold, wrote.

"I don't particularly care either way about the Queen. But the queue? The Queue is a triumph of Britishness," added @curiousiguana.

Queues and the ability to queue have long formed a curious part of Britain's self-identity, along with often idealised commitments to notions of "fair play" and politeness.

Rather than a sign of bad management, the hours-long wait to enter the annual Wimbledon tennis tournament is seen as part of the experience, while the tailbacks for the famed Glastonbury music festival are also part of its folklore.

A best-selling book on Britishness first published in 1946 called "How to be an Alien" by George Mikes -- a Hungarian-born immigrant -- claimed queuing was a "national passion of an otherwise dispassionate race".

"An Englishman, even if he is alone, starts an orderly queue of one," Mikes wrote. 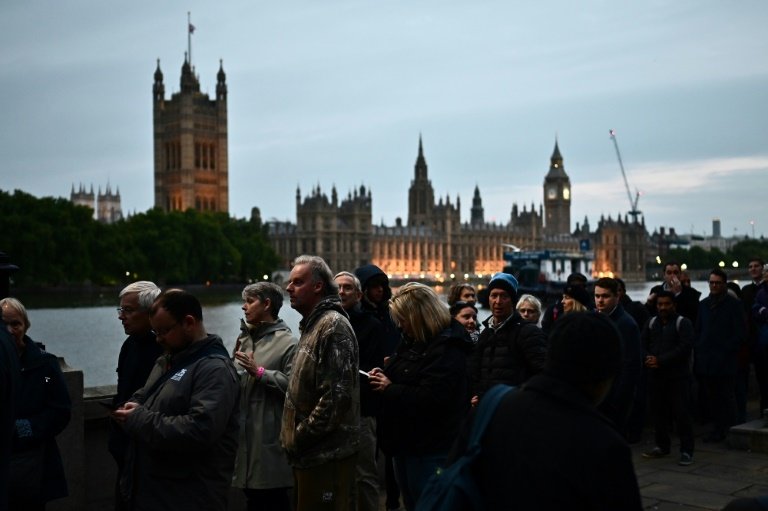 Queues and the ability to queue, have long formed a curious part of Britain's self-identity / © AFP

Social historian Kate Bradley at the University of Kent told AFP that queuing became wrapped up in national mythology during World War II, when rationing was introduced, and people faced long waits for every-day items like bread and butter.

"Obviously there were queues before the Second World War, but tolerating the distress became a virtue during the war," she said.

Joe Moran, a historian at Liverpool John Moores University, told AFP the celebration of queues "sends back this self-flattering idea of the English as well-mannered".

The author of "Queuing for Beginners: The Story of Daily Life From Breakfast to Bedtime" noted how it also appealed as "very fair way of rationing a scarce resource".

Bradley and Moran both stressed that in modern Britain most daily queues were as frustrating as anywhere else in the world and that it was wrong to imagine orderly lines were exclusively British, or even a reality across the country.

During war-time rationing, the police were sometimes needed to put down riots and arguments were common, Moran said. 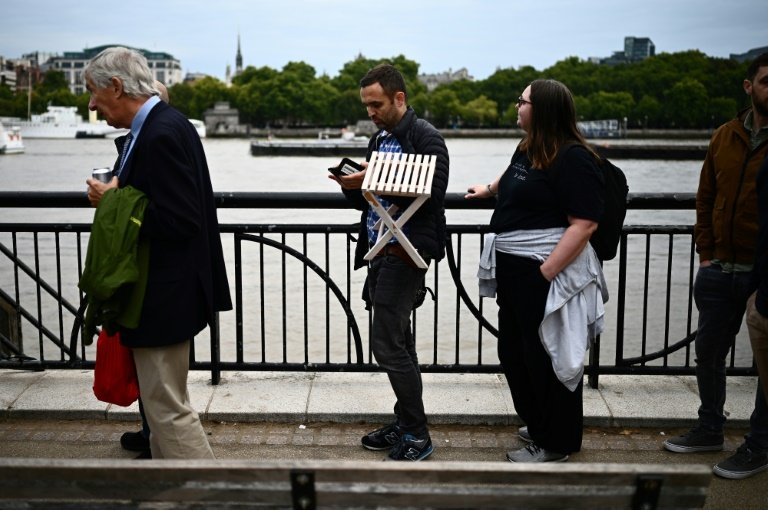 "Personally, I can't cope with a queue of more than five minutes," said Bradley, who is currently working on the history of telephone hotlines.

"Other countries queue, but it has become a sort of shorthand about talking about Britain and it conveniently fits with ideas about British people being emotionally distant, uptight, and holding back."

Both experts underlined how technology being used for the queen's admirers had also helped reduce one of the scourges of waiting in line: the widely despised queue-jumper.

Everyone is given an electronic bracelet which shows their position.

It also allows them to leave to go to one of the 500 temporary toilets or buy food and drink -- before returning to their spot.

"I think the people of the United Kingdom are demonstrating not only their commitment, their respect for the queen, but respect for each other in queuing in such a responsible way," Prime Minister Liz Truss's spokesman said on Thursday.