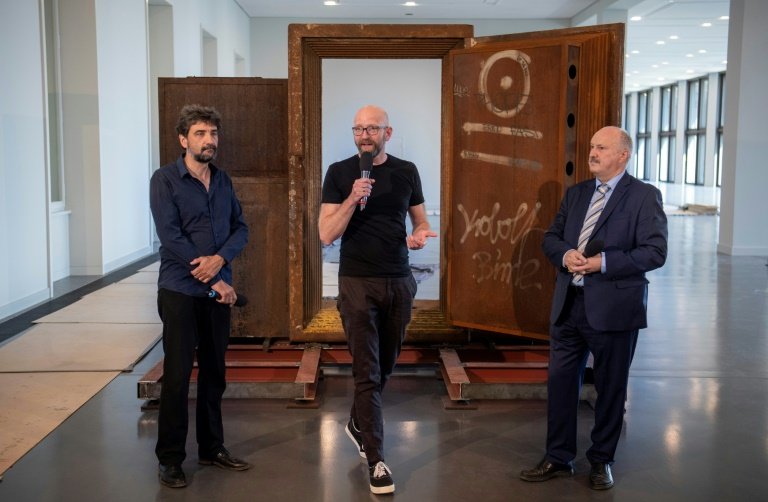 The giant metal entrance door to a legendary techno club in post-Wall Berlin moved into a museum Tuesday as a symbol of the city's rebirth after its Cold War division.

The rusty portal to the original Tresor nightclub became the first object for a display about the city at a museum still under construction.

It once sealed the massive bank safe rooms of the pre-war Jewish-owned department store Wertheim, whose family proprietors were stripped of their assets by the Nazis and either sent to the camps or forced into exile.

It languished for decades in the no-man's land at the highly militarised border.

But after the Wall fell in 1989, dozens of the city's abandoned industrial spaces, particularly in the ex-communist east, were converted into pop-up electronic music venues, attracting party people from east and west Germany and around the world.

Perhaps the most iconic of the early 1990s clubs was Tresor, which owner Dimitri Hegemann built inside the former department store's underground safes with the famous door at its entrance.

The club's original location finally closed in 2005 and the site was razed to construct a sprawling shopping mall and office buildings.

While the nightclub found new digs in a power station, complete with its original steel bars and safe-deposit boxes from the safe rooms, the five-tonne, 2.3-metre (7.5-foot) door was too heavy to install.

Hegemann held onto the structure, still marked with the spray-painted symbol of the club: a circle with a dot inside and a line below it.

Now he has lent it to the new Humboldt Forum Berlin museum, which is due to open next year in a recreation of a former palace belonging to the Hohenzollern dynasty that was damaged during the war and later destroyed by the communists.

At a presentation Tuesday, Hegemann called the door "a symbol of the threshold to a new era" in reunited Germany.

Amid rampant gentrification, he said he hoped booming Berlin would not give up its status as a mecca for "free space and subcultures".