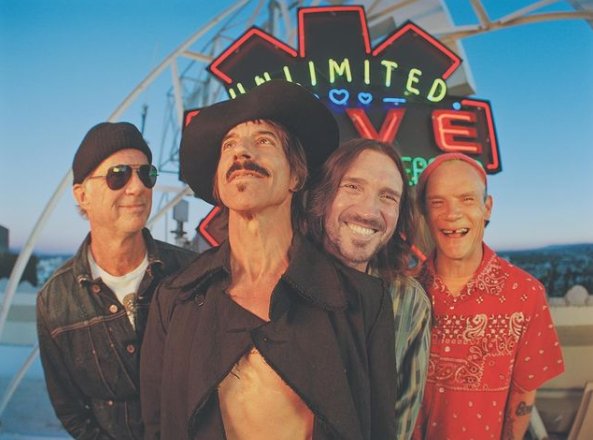 ‘Do you reckon they’ll start with a classic, or one from the new album?’ I asked my friend moments before the Red Hot Chili Peppers took to the stage at the Stade De France in Paris last Friday. In reply, the funk-rock veterans promptly launched into a long and indulgent introductory jam simply, I felt, to spite me.

The audience, of course, ate it up – and for good reason: the ‘Unlimited Love’ tour marks the live return of guitar-virtuoso John Frusciante, following his ten-year-break from the band. With their old friend back in the fold and ensuring the reinstatement of their ‘classic’ line-up, the recent Hollywood Walk Of Fame inductees looked rejuvenated - Frusciante’s mysterious aura and technical wizardry had clearly been missed. When frontman Anthony Kiedis, who had been waiting in the wings during the jam finally took to the microphone, the crowd’s excitement was almost tangible: the Red Hot Chili Peppers were back. The band quickly followed up the instrumental noodling with songs ‘Around The World’ and ‘Dani California’, with the latter’s chorus provoking some particularly convincing audience participation.

Often dismissed as overgrown teenagers, the Chili Peppers manage to spare time for both quiet reflectiveness as well as hysteric energy

By now, the funk-rockers had settled into the groove and were firing on all cylinders. Flea, the band’s loveable and eccentric bassist, was as energetic a stage presence as ever, cracking jokes with the fans and providing the balance to Frusciante’s quiet mystique. Though the band managed to shoehorn several more jams into their setlist, it was the bassist who delivered the most poignant one. In what seemed like an improvised moment, Flea stepped forward and addressed the Supreme Court’s decision to overturn abortion rights. ‘I’m pro-choice’ he sang, in a husky, off-key voice, with his fingers dancing across the fretboard and all remaining members looking on in defiance before resuming the set.

It is these sorts of spur-of-the-moment acts that make the Chili Peppers so likeable; that and the fact that they know how to be fun and thought-provoking all at once. No one displays this quality better than frontman Anthony Kiedis, who is equally as convincing as a rapping, drug-fuelled sex maniac as he is a crooning, world-weary poet. As the noisy cock-rock of ‘Suck My Kiss’ made way for the mellow and vulnerable musings of ‘Hey’, I found it difficult to contain my awe at Kiedis’ – and the band’s – diversity. Often dismissed as overgrown teenagers, the Chili Peppers manage to spare time for both quiet reflectiveness as well as hysteric energy, which is well showcased even within the pool of their greatest hits.

Speaking of hits, I was surprised at how well the crowd reacted to ‘Black Summer’, the lead single from the band’s latest album. It seems the track has already entered their catalogue of classics - a collection so large the four-piece actually excluded some of my personal favourites - such as ‘Scar Tissue’ and ‘Can’t Stop - from a near two-hour setlist. This was, however, only a minor disappointment during what was otherwise an exceptional performance from the old California crew. If I entered the stadium with an interest, I walked out with an obsession.