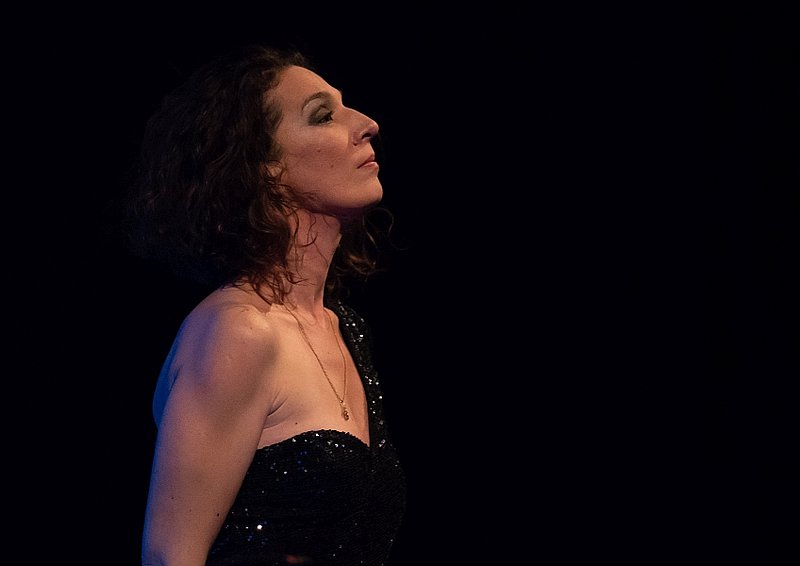 Dulce Pontes is an icon at home in Portugal and on the global world music scene. Since her breakthrough with "Canção do Mar" in 1993 she has travelled the world playing some of the finest contemporary concert venues.

Win two tickets to the concert at Trifolion Echternach on Friday, 26 November by participating in the competition here.

Her career path led her to collaborate with other great artists, including Italian film composer Ennio Morricone, for whom she sang on "Cinema Paradiso", one of the most significant Italian drama films from the 80s.

In Luxembourg this weekend she will take the audience on a trip around Brazil, rediscovering songs full of passion, dance and sensuality of the Brazilian diva Elis Regina. Dulce's background in theatre will surely make this an intriguing and powerful experience. On stage she is accompanied by Yelsy Heredia (double bass) Luis Guerreiro (Portuguese guitar) and Sergio Fernandez (piano).

RTL Today's Josh Oudendijk had the opportunity to speak to Dulce prior to her tour.

I always start off by asking: How are you?

I'm okay. Well, I'm worried about what's going on. Of course we'll talk about music, but this is something that comes before. There are people dying. I think it's important not to avoid the subject, not mystify it, or put the artist in a place where we can't talk about it.

I find it a difficult topic to ask musicians about, because in the past two years Covid has been so dominating.

I know a lot of people who suffer from psychological problems. Of course such an event also happened before, but there was no internet back then. We need to face this together. But I am worried because I see many people with differing and divisive attitudes. Of course music helps, art helps. I am a musician, but also a human being.

We always overcome these events. Animals and nature have the capabilities to rise from the ashes, even in places where there were nuclear disasters.

That reminds me of Chernobyl, in a documentary in which David Attenborough walks through the now deserted area and shows how nature has flourished in a place humans can no longer live.

Do you sense a different energy coming from the audiences you place to now than before the pandemic?

My first concert was in July. When I saw the people outside Palacio Real in Madrid, I thought: 'Oh my god'. I saw couples who could not be together, they were seated two metres apart, and they gave their hand.

People are now more used to live music, but during all this period I did some other concerts. At first, people were not comfortable with their masks, there was this...carefulness. It was strange because you cannot ask someone to sing! You feel ashamed even (laughs).

I love to see the faces. Then you get used to the eyes. People are more sensitive.

And you also can't see their emotions and expressions...

Do you see a difference between performing for a Portuguese-speaking audience vs a non-Portuguese speaking audience? Do you feel obliged to tell more about the song, or you let the music do the talking?

My 'school' was the theatre, I started doing musical comedy. So I have that background. But I don't like to be extending the music with explanation. I prefer for people to feel it freely, I don't want to manipulate that experience.

And then I also feel that the concert is a trip. You go for a walk and you have different scenarios, different emotions, sounds and things happening. I love that. That is the theatre component, and I want to go more deeper into that with my new album, which comes out in February. I want to make it a piece of theatre - almost like a musical.

We're briefly interrupted by her cat, meowing at Dulce at the door, she says. His name is Tofu due to his colour and shape - "a little round, but I'm not going to eat him" -, named by her daughter.

Tell me about this album coming in February. I really liked your version of Amapola.

Oh really? Thank you! Look at me, I'm like a child, that makes me so happy.

I think you will always feel like that with every new release, no?

Yes, and I do that not because what people think, but because I love that creative process. And once it belongs to the people, it feels so good.

How did you come about adapting and 'adopting' that song?

First because it was the first song I truly fell in love with and I could buy...actually in Amsterdam, because you couldn't find "Once Upon A Time In America" anywhere in Portugal, and then I listened and loved it so much. And I thought it was from Ennio Morricone! And I was surprised when I was asking for permission to cover the song that it was by Joseph Lacalle.

But I loved the melody, I read the lyrics in Spanish and really identified myself. So I started rewriting it - putting Amapola in freedom for myself. Sorry, Joseph Lacalle, for doing that!

And then I put the fado trio underneath that, which was very nice. In my head I heard how it would sound, and then I worked with Yelsy Heredia, double bassist from Cuba. He was the co-producer of the album and we arranged a lot of songs from the album. You will see him! Along with Luis Guerreiro on Portuguese Guitar and Sergio Fernandez on piano.

Would you consider yourself to be a 'fadista', or a singer influenced by fado but who took her own path?

I don't like putting things in a box. Since I was a small child I was taught outside the box, so I don't see the things like that. Yes sometimes I am a fadista, but no one can be a fadista every day. Or with tango, you cannot have that deep delicateness and soul every day! It's not possible. When I see people singing every night in fado houses I think: My god, I would be depressed. But I love to sing different kinds of music, and I had a very good teacher, but it was just not a path I wanted to take.

I like to go and listen to new things. For example I love to listen to Eminem. It's beautiful, great musicality and poetry, this guy is crazy. It's amazing, wow!

So what else do you enjoy singing?

I love classical music, since I was a child. I love jazz, it relaxes me a lot. I like to go and listen to new things. For example I love to listen to Eminem. It's beautiful, great musicality and poetry, this guy is crazy. It's amazing, wow! Also here in Portugal, I love to hear Carminho, from the new generation. There are a lot of amazing singers and writers, it's a very good generation that is international but keeping the Portuguese traditions, such as fado.

And sometimes I listen to me cat (singing) meow meow, meow meow! But I also like to stay in silence for a long time. Especially for writing in silence.

Wait, you don't listen to the music when you write it?

I don't mean music, I just mean writing, for example poetry or theatre. When I write I don't yet know whether I will be singing that.

You just mentioned Carminho. These new artists, this new generation, you say they keep the traditions but also forge their own path. Tell me more about that.

Carminho is able to sing everything, but always with a fadista personality. We met at the studio in the summer. One day she was there in the door. I believe she was recording a duet with Caetano Veloso, and it was so wonderful to meet her. We both said "I love you too!" I am a big fan of Carminho. You should listen to her Portuguese adaptation to Madame Butterfly.

Do you sometimes have writer's block?

I have blocks in many ways, of course it depends on the period. But it's normal. Just breathe, it will come again.

I never do something that I don't love.

I want to ask you something about the music industry - the business is continuously evolving, with a dramatic change in the way we consume music, and artists being pushed in certain directions by record labels. Is this just a pop trend, or is it also visibly felt in the world and jazz music industry?

I never do something that I don't love. For example, if it's a big choir singing for a good cause, even if I don't like the song, I will be there. But if in my repertoire, whatever I try to do creatively, it doesn't fit, then I don't do it.

I've been fighting all my life for that freedom. Even though I am signed again with Universal Portugal. It's different now, I am 52 years old. I don't need to prove anything to anyone. The idea that something is seen as good has nothing to do with you. I had big fights because of that, there are many people that hate me because of that.

I think it's very brave that you stand up to what you believe in creating.

You pay a price. And that price is when you're alone, like I was for 12 years as an independent artist. It was very, very difficult. I am not a millionaire, I could not finance everything. My income was mainly coming through concerts, but I managed. I could follow and continue with my ideas. It proved me that I could do it myself. But if I want to reach more people I needed a label. You have to be in media all the time, and these things.

We really look forward to having you in Luxembourg!

I love Luxembourg, don't ask me where exactly but I remember it being very nice. I think I've been three or four times. It's a shame, I don't have a record of all the concerts I've done.

Thanks for your time, Dulce.