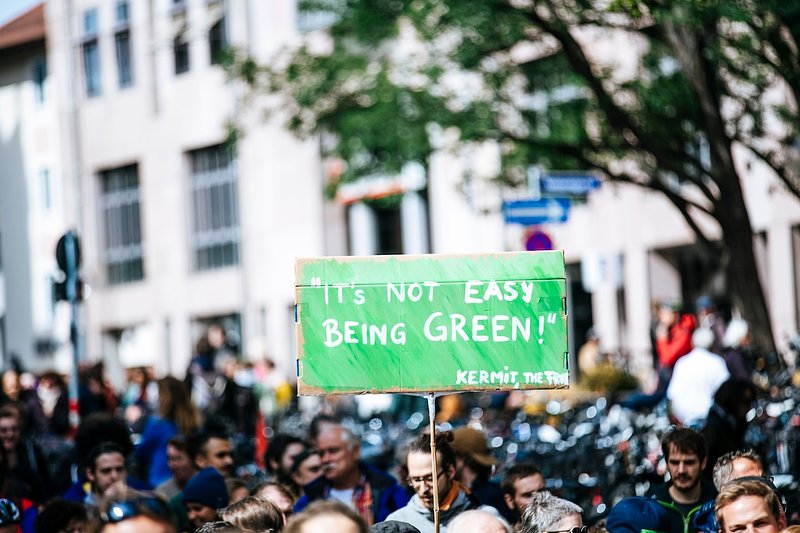 Recently, paintings in London, Paris and The Hague were smeared with ketchup or very mushy mashed- potatoes.

The people who did this, environmental activists, glued themselves to the walls or floors near the pieces of art they attacked.

Until yesterday, I didn't get the relationship between the state of the planet, and throwing ketchup or mashed potatoes over pieces of art. I didn't understand until I watched the latest situation with a Vermeer painting. The environmentalist who did that and was shown on the news, exclaimed to visitors of the museum: "Terrible huh, when you see something that you love gets destroyed. That's what is happening to our planet."

Ah, okay. So that is why they attack art. I now at least understand why they go for art pieces. Beautiful things (our planet) get 'mashed-potatoed' (i.e. destroyed).

Well… even though I understand the analogy, there is no point to what these activists are doing. Yes, they may be super conscious people, vegans, trying to leave as small a carbon footprint as possible. They might be exemplary to how more of us should be living our lives. For all we know, they've fought their whole lives to ask attention for the deplorable state of our planet. This may even be an act of total despair.

But does all that justify their actions? More importantly, does it serve any purpose?

I don't think so.

First of all, these activists do not solve any environmental problem by damaging world-famous art pieces. It does absolutely nothing for nature. In fact, one might argue that they make matters worse: they litter and soil, thus requiring water and soap to clean up the mess they make; and, after having glued themselves to the wall or floor, they need medical assistance to get unglued from said surfaces, thus requiring a medical team to get in a car (carbon footprint, hello?!) to come and free them.

Of course, I understand that they are in it for publicity. It concerns world famous pieces of art after all, so yeah, that'll get you attention. But, and this brings me to point two: it only focuses on the problematic side of things and not on any solution. Everyone knows that our planet is suffering. That we have used up too much of our natural resources. That we are exploiting the earth.

Unfortunately, it hasn't yet led to sufficient action. I am aware of that, and I think most people are. So, these 'activists' aren't contributing a thing by focusing on what we already know. They are merely stating the obvious. The environment is in bad shape and we’re ruining the planet. Yes. Thank you. This is old news. We are all aware.

Add to that that their methods are very dubious at best. Do they actually think that the public is sympathetic to their cries of attention? If you are against beautiful things being damaged, then don't damage. How about practising what they preach?

Using methods that the public is not sympathetic to will not help the cause. Instead of getting a message across, these activists only turn public opinion against them, leaving no space for any message to be conveyed.

What stays behind with the public are feelings of contempt towards these activists. And that's a shame, because they most likely have their hearts in the right place. They just seem clueless as to how to put it into positive action.

Ghandi once said something along the lines of "Be the change you want to see in the world". What would it mean if we were to translate that saying to those art-damaging activists? If you want things to change, vandalism is okay? If you want to influence a change, smear masterpieces and world-famous objects with mashed-potatoes and ketchup?

If any of these activists are reading this, please, reconsider your actions. Focus on something that might actually grab people's attention in a positive way. Look at Greta Thunberg. She was only 15 when she started her school strikes to ask attention for climate change. Look at the movement she created. Half the world joined in her school strikes. It was positive because she got young people off their feet. She got people to listen. She addressed the UN.

Or Boyan Slat for that matter. CEO and founder of The Ocean Cleanup. He started developing his invention for cleaning up the ocean at the age of 16. He is now running a company with the goal to not only rid the oceans of 90% of floating plastic but to also put themselves out of business (as that would mean they reached their mission). Just check the website of The Ocean Cleanup. It's very impressive. That is change. And impact.

These adult climate change idiots that glue themselves to the floor and damage art pieces; what is their legacy? What is their positive impact? What is the change they started?

There are options that are positive and impactful. Maybe not in the publicity realm. But publicity is not the holy grail. Good ideas are. They at least have a positive impact.

So please don't use our cultural inheritance as a target for vandalism, no matter how urgent the message.