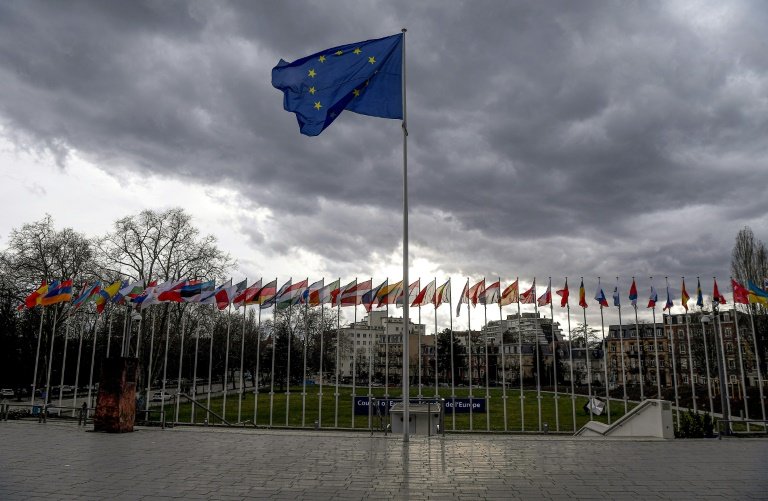 In a hugely symbolic moment, the flag of Russia was lowered and removed from its mast outside Council of Europe headquarters.

Russia's invasion of Ukraine has shaken the EU. But it could be a chance for the Union to strengthen itself as a geopolitical superpower.

Sitting across from the provincial government building where the Maastricht Treaty was signed in 1992, officially transforming the European Community into the European Union, I've hit a bleak moment of realisation: War in Europe, almost unthinkable, is closer than I ever expected.

I've grown up used to peace, freedom of movement, a single currency, the opportunity to work in another country. Despite varying identities and cultural differences across the continent, we've managed to pull together and pool our resources for the greater good, acknowledging that by working together, rather than alone, we can be stronger.

I've always loved Europe, and I see myself as a true European. But it is a privilege my generation has been taking for granted.

I was born several years after the Treaty was signed, and never knew a life in which European countries declared war on their neighbours. But it is happening. Granted, Russia and Ukraine are not a part of the EU, but part of Europe, an important distinction which also explains why there are no NATO military boots on the ground in Kyiv right now.

But despite this global crisis unfolding outside of its borders, the war is sending ripples throughout the EU, igniting an unprecedented response from Member States as a unified voice against Putin's aggression - and it will only grow.

Stirring up the peace pot

Europe has been home to some of the biggest wars in human history. Not only World War I and World War II, but also the Thirty Years' War (1618-1648), the Crimean War (1853-1856), or the Spanish Civil War (1936-1939), to name but a few examples. Millions of lives were lost. There were brutal dictators, corrupt governments and atrocious war crimes.

But Europe has also been the continent of peace. We've come a long way since signing the Schuman Declaration and supporting the steel and coal industries of France and Germany. To some, the EU may have evolved into a bureaucratic institute, and there for sure are matters that need improving, but the truth is that since the existence of the Union, Europe has been at peace.

Now, a few thousand kilometres away, a humanitarian catastrophe is on display, ignited by a despicable, egomaniacal and pathetic tyrant - yes, Biden's words were right, Putin is a war criminal - who could not care less about the consequences of his actions. He is testing the superpower's response.

Putin is threatening with nuclear attacks should NATO or the EU get involved in his business in Ukraine, and trigger an outright World War III. Meanwhile, the EU is still awkwardly dependent on Russian energy sources, making it careful not to cross the line.

But there has been a shift within the Union, a change of attitude and a renewed boost of confidence. A pro-European sentiment, a will to defend not only one's own country, but a group of nations, protect its borders, and help neighbours where it can. Euroscepticism has been largely squashed; far right parties have either supported Putin's move or remained silent, because they know, in secret, that being a part of Europe is the best place to be right now.

A consequence of this war is one that Putin is not grateful for, and may not have expected either: Europe has unified and come together. Both within the Union, as well as with other strategic partners around the world, like the US.

Since the invasion, Ukraine is closer to the EU than it ever was, and even eurosceptic EU governments in Hungary and Poland have taken the side of the West, opening up borders to refugees (albeit to white refugees - this was a very different story with 2014's migrant crisis). Ukraine's president Volodymyr Zelensky was smart in speaking directly to individual parliaments via teleconference, rallying up additional support for weapons and other aid.

Suddenly, an institution which is often notoriously slow at responding to foreign threats, put sanctions on the table within days - from blocking Russia from SWIFT, to blocking pro-Russian media outlets, closing EU airspace to Russia and setting up humanitarian support groups at the borders with Ukraine to help with refugee influxes. Oligarchs have been sanctioned, stripped of their multi-million mansions and yachts.

It also drove the Union further to speed up its transition to a green economy. Earlier this month, the European Commission set a target to cut the EU's Russian gas imports by two thirds by the end of the year. States are working together to find ways to boost their own energy output, with the Netherlands announcing the doubling of its wind energy resources by 2030.

A handful of countries have voiced their support for Ukraine becoming a member of the Union as soon as possible, although this remains rather unlikely. But the country is definitely closer to becoming a member now than it was before the invasion.

"We are fighting to be equal members of Europe," Ukraine's president Volodymyr Zelensky said in a tearful address to the European Parliament earlier this month. "Do prove that you are with us. Do prove that you will not let us go." "The EU will be much stronger with us," he said.

While EU membership may not halt Russia's military aggression, it does underline Europe's strength, something Putin has not been able to grasp, says Mai'a Cross of Edward W. Brooke Professor of Political Science and International Affairs at Northeastern.

A united defense is now back on the table, a delicate subject which a few years back was non-negotiable. Member states have their national competences, and defense is one of them. But EU countries are sending weapons to Ukraine, and the Commission has fleshed out a budget in support of the war-torn country. Even Germany, with its scarring memories of war, has shipped guns to Ukraine.

From Portugal to Moldova, from Italy to Finland, European countries have come together to support each other, no matter whether part of the EU or a neighbouring country. Putin's aggression has triggered a united front.

It is harrowing to see what is happening just behind the Union's borders, but it reiterates the need for Europe and the European Union. For a common stance, a common fight, a common goal: peace.