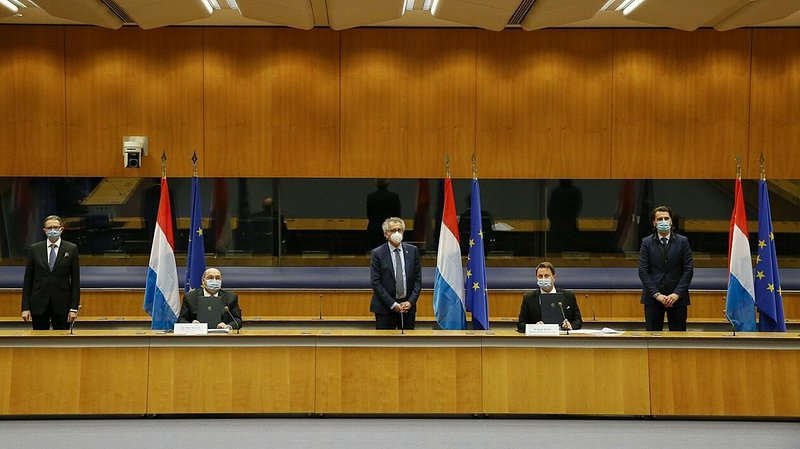 Wednesday was a poignant day for Marcel Salomon and his fellow Holocaust survivors from Luxembourg.

Marcel, 85, vividly remembers his life in Luxembourg before the war. His father, Aron immigrated from Poland to Luxembourg in the early 1920s to escape the rise of antisemitism in the country, undertaking a harrowing journey lying beneath a plank of a train car.

Upon arriving in Luxembourg, Aron was met warmly by the local Jewish community, which helped him secure housing, build a shoe store, and put his theatrical talents to use.

He then met a young Luxembourger, married and they began growing their family. Marcel was born in 1935 and recalls his family’s quiet, honest life. His father’s memories of anti-Semitism began to slowly fade as his bonds with the people of Luxembourg deepened, and he saw people treat each other as equals.

After some time, Marcel’s father had built the dream life he had always sought. But that quickly changed when the Nazis occupied Luxembourg.

Thankfully, the Salomon family was able to escape to the Dominican Republic. They had to leave all their possessions– the product of two decades of hard work.

On International Holocaust Remembrance Day, over 80 years after Marcel’s family fled for their lives, Luxembourg signed a historic agreement to provide a measure of justice for property wrongfully taken during the Holocaust and not returned. This historic agreement between the government of Luxembourg and the Jewish community of Luxembourg, together with the World Jewish Restitution Organization (WJRO) and the Luxembourg Foundation for the Memory of the Shoah, serves as a powerful commitment to celebrate the rich contribution of Jews in Luxembourg and memorialize the horrors Jews suffered during the Holocaust.

Under the agreement, Luxembourg will provide funds as a symbolic acknowledgement to support Holocaust survivors from Luxembourg and commit dedicated resources for Holocaust memorialization, remembrance, education, and additional research on looted art and other issues. Luxembourg, working with the Jewish community of Luxembourg and WJRO, will research and return dormant bank accounts, unpaid insurance policies, and looted art.

A centerpiece of the agreement is the Cinqfontaines monastery complex, which was the last station and collection point for Jews before deportation to concentration camps. Cinqfontaines will be transformed into a permanent memorial and educational facility commemorating the stories of Holocaust victims.

The agreement is a compelling call to action for justice across Europe. Other European countries must fulfill their commitments to Holocaust survivors and provide restitution or compensation for property that was wrongfully taken by the Nazis and their collaborators during the Holocaust and its aftermath. The urgency of this issue is clear—the JUST (Justice for Uncompensated Survivors Today) Act Report, released by the US State Department in July 2020 at the request of a unanimous Congress, found that many European countries have not yet resolved Holocaust property restitution issues.

We commend Prime Minister Bettel for his leadership on these issues. Former US Ambassador J. Randolph Evans has been a passionate and tireless advocate dedicated to justice for Holocaust survivors, as has Israeli Ambassador Emmanuel Nachshon. More than 75 years after then end of Holocaust, we urge leaders across Europe to have the courage to stand up for what is right. It is imperative that we focus not just on the challenges of today, but also work tirelessly to right the wrongs of the past. We must work together urgently to preserve the memory of the Holocaust and secure justice for those who suffered so greatly during the Holocaust.