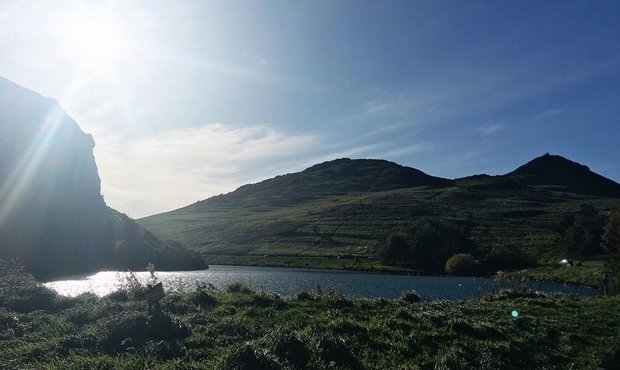 This is the view you can get in the middle of Edinburgh. / © Nathalie Lodhi

There is a strange paradox abound that the places you associate with walking aren’t actually as compatible with walking as a means of getting around.

Of course, the countryside is what you’d picture if you have a brisk walk in mind, but if you actually want to get to a supermarket, chances are you’ll need your car.

Cities, on the other hand, bring up images of congestion and traffic, but are much easier in terms of finding everything you need (nearly) on your doorstep.

I moved from my small town in Luxembourg to a university city in the United Kingdom, which was and remains both small and very walkable. I lived halfway between the city centre  of York and the University of York, which suited me as I am of the opinion that 20 minutes is the optimum walking time for a commute of some kind. Campus wasn’t far, town was even closer, and the supermarkets were also around 10 minutes’ walk away.

That is one of the things I love the most about Edinburgh [The reader cries: Yes, yes, Edinburgh is the bee’s knees, why won’t you shut up about it?!] – you can live centrally and it is relatively affordable, although obviously the further out you live, the cheaper your rent will be. In my opinion, living centrally is worth the extra cost, as you don’t have to be dependent on buses or trains to get to places. Instead, you just have to rely on your little old legs.

Walkability - what is it?

As a result of my living experiences since moving away from Luxembourg, walkability is a tool that I definitely keep in mind when contemplating where I want to live. As defined by Esri, “Walkability is a measure of the effectiveness of community design in promoting walking and bicycling as alternatives to driving cars to reach shopping, schools, and other common destinations. The Centers for Disease Control and Prevention (CDC), the World Health Organization (WHO), and other health organizations advocate increasing the walkability of communities to promote fitness, combat obesity, and enhance sustainability.”

What's not to love?

The website Walk Score predominantly focuses on North American cities, but determines how many errands can be done without the use of a car and rates neighbourhoods on their car dependency. I'll come back to Walk Score later, but it is certainly an interesting tool, especially in terms of how it may weigh up with the reality.

The benefits of walking as opposed to relying on public transport is that you aren’t reliant on a particular schedule, beyond your own. You figure out how long it takes you to get from A to B (and if you’re like me, it’s likely mostly 20 minutes or around that mark), and you leave with enough time to get there. It’s free, it’s fit, and it’s low-pressure. What’s not to love? (Except for when the heavens are raining down on you, in which case the odd bus journey may be worth it).

Indeed, walkability is one of the reasons I haven’t joined the great graduate exodus to London yet. While London is walkable if you happen to live reasonably close to your work, that is not super realistic in terms of maintaining a cheap-ish rent. Some people manage it out of luck, but in most cases, you will probably end up having to commute a good portion of your day and that’s something that is deeply unappealing to me. Whereas, in Edinburgh, not only am I close enough to all the amenities a city has, but I also have a number of hills to go walk up about half an hour’s walk away (not including the ascent, obviously), if I do fancy the challenge. Admittedly, my fear of heights gets slightly in the way of that endeavour, but that's another story.

Using London as an example, it would be safe to assume that the opposite, which is to say a small city, would be far more walkable. But the answer is yes and… no.

I find Luxembourg in particular has this strange phenomenon of not seeming very walkable on two levels. First of all, let’s consider if you live relatively near to Luxembourg City, but in a smaller municipality, like Walferdange or Mamer or what not. I don’t live far from Walferdange, for instance, and the Delhaize there is twenty minutes walk from my home. But do I ever walk there? Not really.

For some reason, I perceive living in Luxembourg as being inherently unwalkable, if we bear in mind that I’m talking about walking as a form of a commute. I worked at that Walfer Shopping Centre for two weeks one summer and didn’t walk there and back every single day, even though now I feel that’s absurd. The unlimited public transport card I had as a teenager may have contributed to that though.

As a country, Luxembourg is incredibly car dependent, although that is partially out of necessity due to poor transport links in some parts of the country.

As for Luxembourg City, I'm not sure how walkable it is either. Granted, I have never lived in the city but I did go to school there in Limpertsberg. Again, if we were heading towards the centre of town, myself and my fellow schoolmates would tend to get the bus there. There were reasons for this, notably the lunch break time limit. On nice days after school, you would walk to the centre, but sometimes also get the bus.

That said, the journey between Limpertsberg and the centre of town isn’t super pedestrian friendly, despite the park’s presence. You have to cross quite a busy intersection by the theatre and the pavement along the Avenue de la Porte Neuve isn’t the widest. When I think back to being in the city centre and wanting to go to the station-side, I would usually hop on a bus. Another example would be to walk from the Hamilius to the Bouillon or any of the schools there. Do people tend to do that? Not really. According to Google Maps, it is a 2.2 kilometre walk and would take 27 minutes, so it falls into my (approximate) radius of ‘walkable’, yet I would get the bus. It's something I still try to wrap my head around, being that in York or Edinburgh, the bus was considered a treat or for longer journeys.

As for why I tend to towards the bus, I wonder if it’s possibly because buses are so easily accessible and because when I do go to Luxembourg City, it’s by bus. So perhaps having arrived in the city by bus, my instinct is to continue to use public transport to get around. Another factor may be the density of the city, as Luxembourg City feels rather spread out.

Going back to Walk Score, you can put locations from around the world in, but the data isn't complete. However, I did compare a few locations in Luxembourg just to see how walkable they're deemed to be.

The below tool shows the radius that 20 minutes of walking would get you to in a few locations. Naturally, the centre of the city is a 'walker's paradise', but how many people actually live there?

Indeed, the very makeup of Luxembourg does not lend itself to walkability. Most people tend to live outside of the capital, with many even living outside of the country, which makes walking a difficult form of transport when your workplace may be 10 kilometres away from your home. As such, it is perhaps a false comparison to examine Luxembourg alongside other cities, effectively in light of the fact that Luxembourg as a country is so small that people commute into the country. And, once the government makes public transport free, this won't necessarily make Luxembourg more walking-friendly.

I do think that the unique set up of Luxembourg as a small country and smaller city makes it less prone to walkability than other cities. It certainly makes me think twice about the presumption that a smaller city makes a more walkable city.

--
Nathalie Lodhi is a freelance translator for RTL Today and occasional journalist living in Edinburgh.