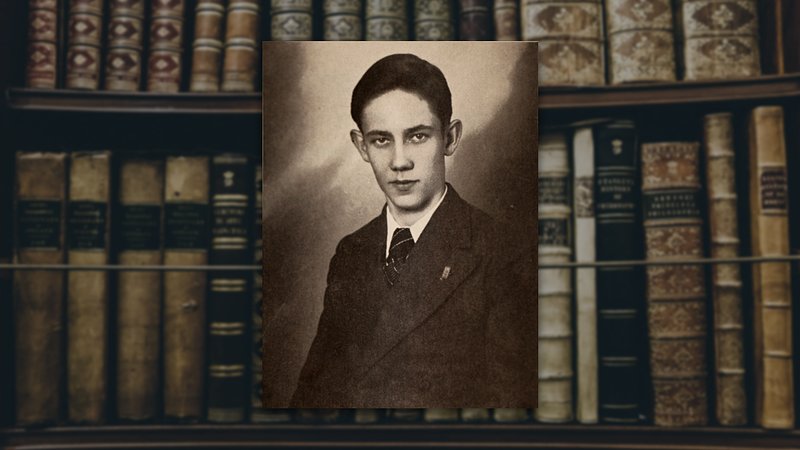 Raymond Petit was still in secondary school when the Nazis invaded Luxembourg in 1940. Together with his friends, he created what was to become the Grand Duchy's main resistance movement.

When the Germans marched into Luxembourg on 10 May 1940, the lives of the Grand Duchy's residents were about to change drastically.

One of these residents was Raymond Petit, a 20-year-old student at the secondary school in Echternach. His life story is both extraordinary and – in parts at least – shrouded in mystery.

Raymond Petit was born on 16 January 1920 in Luxembourg City.

As a child, he contracted polio but thanks to re-education and training, he managed to partially overcome the effects of infantile paralysis. He enjoyed cycling in particular and often used his bike to get around.

After completing primary education in the capital, he enrolled at the Lycée Classique d'Echternach (LCE), the Echternach secondary school. He enjoyed music and was a member of the Chess Club, which quickly developed into a group for political discussions. During this time, Petit was part of a group of students that formed the so-called Echternacher Freundeskreis ("Echternach Circle of Friends"), which would go on to play a crucial role after the Nazi invasion of Luxembourg.

Early resistance and an enigmatic doctor

Several students at the LCE considered creating a resistance movement during the Phoney War, an eight-month period at the onset of World War II during which little actual warfare happened.

After meeting a certain 'Dr Henius,' a German who had fled the Third Reich and had now become stateless, Raymond Petit was finally persuaded to join a potential resistance. Dr Henius shared stories with Petit about what was actually happening in Germany and told him about the persecution of Jews and the horrors of the concentration camps. At around the same time, Petit also came into contact with the 'Alliance française' and became a volunteer worker for a French intelligence service, for which he fulfilled minor tasks.

At this point, the student resistance, which was still somewhat disorganised, began spying on Nazi sympathisers, particularly among their peers. As a result of their efforts, the students were able to identify numerous individuals who later played a role in the occupation of Luxembourg following the Nazi invasion.

An invasion that finally occurred on 10 May 1940, and would forever change the students' lives.

The mysterious events of 19 May and a fake obituary

On Sunday, 19 May, Raymond Petit and his friends met in the small village of Hemstal to analyse the situation. During this meeting, Petit already called for the creation of a national resistance movement that was to be put under the direct leadership of Grand Duchess Charlotte and the Luxembourgish government.

What happened after the meeting remains unknown to this day, but two days later an obituary was published in the newspaper Luxemburger Wort, which claimed that Raymond Petit had died in Altrier on Sunday evening.

The claim was proven to be incorrect when Petit returned to his classes several weeks later. His whereabouts during this time are unknown.

According to one account, he worked in a military hospital, where he pretended to be a medical student in order to treat the wounded. Another claims that he rode a motorcycle across the front line into France and back.

Erny Gillen, one of Petit's friends, later stated that at the time, they felt that Petit did not want to tell them the truth, or at least not the whole truth.

The foundation of the LPL

After 'Gauleiter' Gustav Simon was appointed Chief of Civil Administration in occupied Luxembourg in the summer of 1940 and immediately ordered the launch of a massive propaganda campaign known as 'Heim ins Reich' ("back home to the Reich"), Raymond Petit decided to act and founded the Luxembourg League of Patriots (LPL) in late September of that year.

The movement's network was set up in a systematic manner, and it immediately became a huge success in primary and secondary schools all over the country. Local sections were established in every village and town where at least one student was a member of the LPL.

The LPL's activities included distributing flyers and photos, spreading rumours and information, as well as providing material and moral support for people wanted by the Gestapo. The money required for these activities was raised among the LPL's members.

The League also tried to find escape routes for those that wanted to fight on the side of the Allies and established relations with other underground networks in France and Belgium while also looking for reliable ways of communication with Luxembourgers in London.

Besides forging different documents, including ID cards and birth certificates, the LPL even managed to "acquire" several weapons from the police station in Diekirch on 26 October 1941.

Time on the run and death

In 1941, Raymond Petit was informed that he would not be allowed to take his final exams and ultimately, he was expelled from school just before the start of the exams.

He remained an active member of the LPL before going into hiding on 21 November 1941. Under the pseudonym Fernand Schmitt, he changed his hiding place repeatedly and fled from Echternach to Berdorf, before moving on to Drauffelt via Eselborn.

After the Nazis carried out mass arrests in November 1941 and dealt the resistance a heavy blow in February 1942, the LPL had to keep a low profile for a while. Petit's friends wanted to hide him at the house of a so-called franc-tireur (a Nazi opponent who was not a member of an organisation), but Petit refused, claiming that there was too much to do.

Following further arrests on 16 and 17 April, his friends once again tried everything they could to find him a safe place to hide. However, Petit, who was once again in Berdorf at this time, was finally discovered by the Gestapo on 21 April 1942. He shot and managed to hit two or three Gestapo officers before using his last remaining bullet to take his own life.

According to another witness from the time, Jean Aimé Stoll, Raymond Petit had decided to sacrifice himself so that the others could blame everything on him, thus putting an end to the mass arrests.

To this day, it remains uncertain whether Petit actually sacrificed himself or whether he was betrayed.

After his death, the Germans decided to bring his ashes to Germany to avoid creating a pilgrimage site.

Raymond Petit's remains were repatriated from Germany in 1947 and put to rest at the Cimetière Notre-Dame in Luxembourg City.

On 23 January 1947, Petit was one of several members of the resistance who was posthumously awarded the Croix de la Résistance ("Resistance Cross").

His former secondary school has honoured Raymond Petit in several ways: His name figures on a memorial located in the school's science wing and on a plaque in the biology wing of the school, which is known to this day to students as the P-Gebäi ("P-Building"), in reference to Raymond Petit.

A memorial stone in memory of Raymond Petit was inaugurated in the street which also bears his name in Berdorf on 13 October 2008.