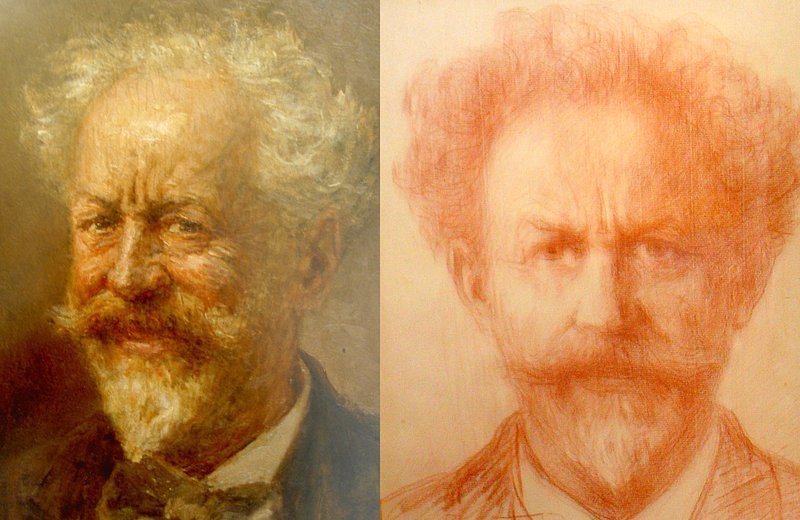 A lifelong nomad, an eccentric bon vivant, and a relentless optimist: This is the story of Frantz Seimetz, Luxembourg's first professional artist. His bohemian lifestyle took him from the shores of the Baltic Sea all the way to the United States of America, and to this day, he is remembered not only as a talented painter, but also as an immensely fascinating character.

In his hometown Grevenmacher, Seimetz is among the most prominent of the town's many historical and mythical figures. A street is named after him, a whole song about his life was written and performed during the 2002 "Maacher Fräiheet" festival, and his likeness is regularly used on posters and flyers advertising cultural events in the town.

Looking at the artist's life, it quickly becomes clear why Seimetz continues to intrigue people long after his death. In order to dissect the legend, this article will look at three main aspects of Seimetz' biography: His life in the light of his many travels, his art and how it allowed him to become the country's first professional artist, and finally the legacy of Frantz Seimetz and his place in the Grand Duchy's cultural history.

Beside his work as a painter, Seimetz is famous for being a life-long globetrotter. The artist, who is also known as "Korriesch Rouden" in his hometown Grevenmacher, was born on 21 April 1858. His talent was recognised at a young age by the industrialist and MP Dominique-Antoine Pescatore from Mertert. Pescatore became the young men's patron and encouraged Seimetz to go abroad to study his craft – advice which the Grevenmacher local would follow for the rest of his life.

At first, his travels did not take him too far as he started his artistic training in Trier. However, he would soon move on to Brussels, where he worked for a local painter, before eventually concluding his education at the Academy of Fine Arts (Kunstakademie) in Munich and the École des Beaux-Arts in Paris.

Seimetz briefly returned to Luxembourg and settled in the capital, where he would soon be offered a unique opportunity. The honorary consul of the United States of America had his portrait painted by the emerging artist and offered the latter a ticket to New York as payment. Having caught an incurable case of the travel bug, Seimetz did not think twice and left the Old Continent for the US in late 1887.

The artist from the Grand Duchy lived in Dubuque, IA for around two years, five months of which he spent on a houseboat travelling down the Mississippi. Doing justice to his taste for exploration, the painter's time in North America also included trips to the Antilles, Mexico, and Canada. 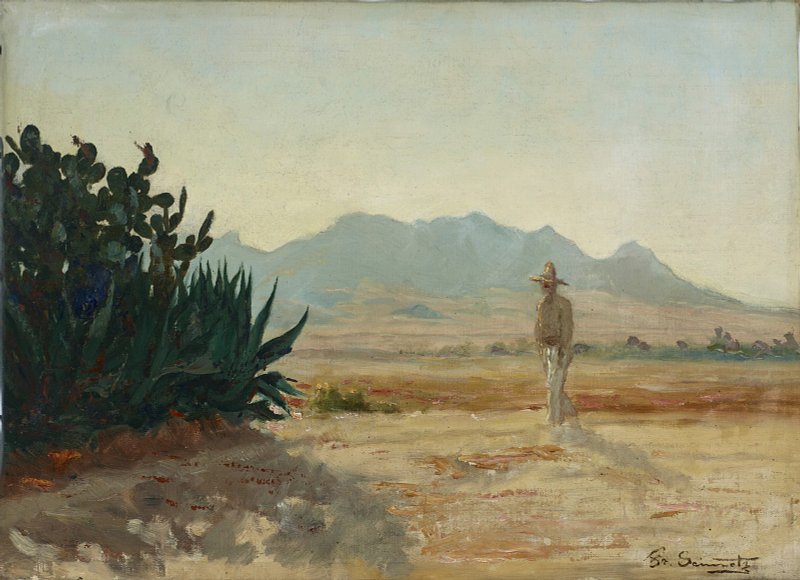 He returned to Luxembourg in 1896 and just a year later, he met and married his wife Marie-Antoinette Bourger from Arlon. Bourger shared her husband's nomadic lifestyle and together the couple travelled across Europe, including trips to, among other places, the Baltic Sea, the Alsace, Munich, and Italy, specifically the island of Capri. In her piece on Seimetz in issue 64 of the cultural magazine. "Ons Stad", journalist and art critic Georgette Bisdorff also notes that he crossed the St. Gotthard Pass in Switzerland on foot. 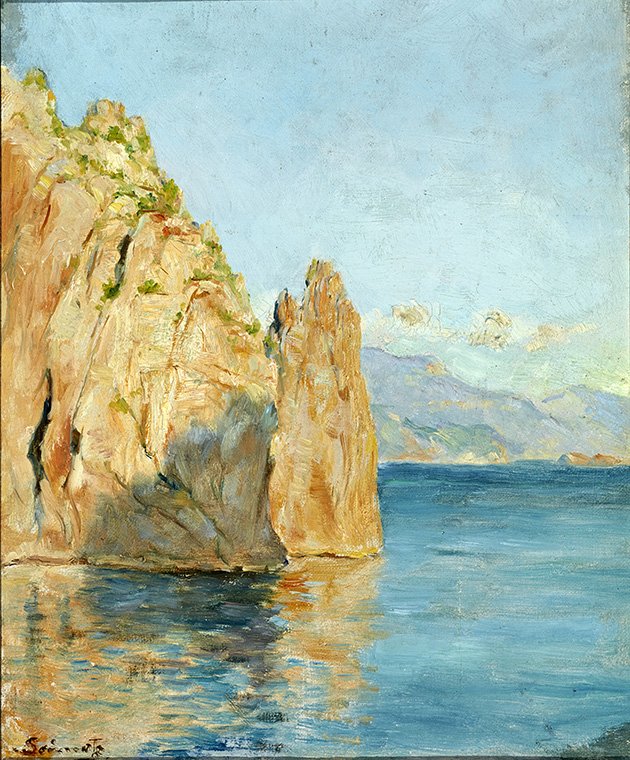 Contrary to many other artists at the time, Seimetz did know success during his own lifetime. While he was not necessarily "wealthy", he was able to live from his art alone and can thus be considered the country's first professional artist.

His first artwork was a still life showing some flowers, and his first portrait depicted the local dean. Besides landscape paintings, portraits were Seimetz' other "speciality". Many of them show people he met during his many travels, but he also eternalised a lot of his personal friends, which included other famous Luxembourgers of the time, e.g. Michel Rodange, the author of the Renert. 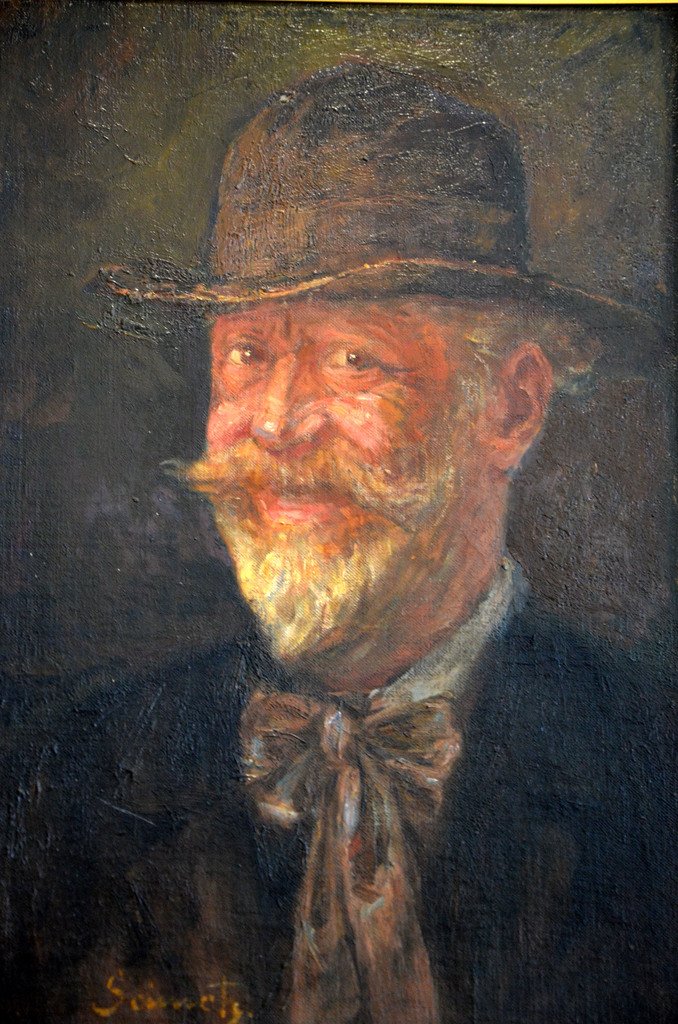 At the beginning of his career, Seimetz' main influences included the Dutch Masters Rembrandt, Frans Hals, Vermeer, and Hobbema. From them, the young Luxembourger learned to play around with bright and dark colours. His mastery in displaying light and shadow can be seen in many of his paintings.

Another potential reason for his success was that he was the first Luxembourgish painter to embrace Impressionism, an art movement which originated in Paris and swept across Europe in the 19th Century. It is believed that especially his time at the prestigious art schools in Munich and Paris shaped the way he intended to use his artistic talent. During his stay in Paris, Seimetz also visited the prestigious Salon, the official art exhibition of the École des Beaux-Arts, in 1884 where he met the famous Hungarian painter Mihály Munkácsy.

Looking at Seimetz' life, which was the natural result of the artist's optimistic, happy-go-lucky attitude towards everything, it seems only fitting that he would be drawn to an art style which emphasised painting outdoors and capturing the feeling and movement of a scene.

Somewhat ironically, the innovator Seimetz later on in his life rejected the emerging art styles of expressionism, cubism, and abstractionism, being unable to understand the evolution art movements were taking in the early years of the 20th Century.

Seimetz, alongside painter Dominique Lang, was awarded the Grand-Duke Adolphe Prize in 1904 and many of Luxembourg's biggest newspapers published obituaries and tributes following his death in 1934.

III. The legacy of Frantz Seimetz

In more than one way, the name of Frantz Seimetz should always come up when discussing the Grand Duchy's greatest artists.

From a cultural point of view, he proved to be an innovator by delving into Impressionism and depicting the Grand Duchy and the many, many places he visited in completely new ways. His rather irregular painting style differentiates him from his friend and contemporary Jean-Pierre Beckius, who is often regarded as the official "Painter of the Moselle". As Luxembourg's first professional artist, he achieved something which is difficult even for today's artists and is only further proof of his exceptional talent.

However, especially in his hometown Grevenmacher Seimetz is also remembered for his eccentric, but immensely likeable character. While his art may have made him famous, it is very apparent that Seimetz' true love and passion was for the experience of life itself. He had a taste for adventure which accompanied him his whole life and a genuine curiosity about the world - and the people - surrounding him. Batty Weber, one of Luxembourg's most popular authors and a personal friend of Seimetz, described the painter's residence in Luxembourg City as a "small museum" filled with artworks and ancient furniture.

Seimetz took chances, dove headfirst into the deep end again and again, and set out into the unknown while always carrying the memories of his upbringing with him. His memoire, which he wrote towards the end of his life, is a testimony to a sarcastic, witty, and intelligent man, who lived life on his own terms and ended up becoming one of the truly fascinating personalities of Luxembourg's history.