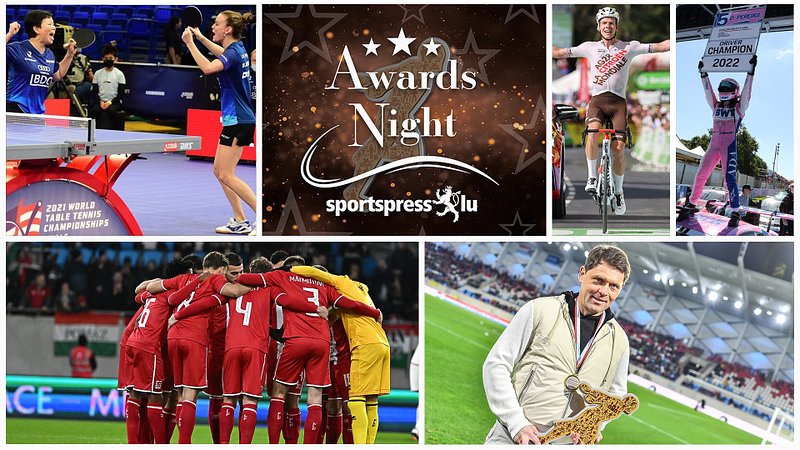 Sports Persons of the year: Awards Night 2022
© Valentin Wagner
The photos published on this site are subject to copyright and may not be copied, modified, or sold without the prior permission of the owner of the site in question.

After a two-year hiatus due to the Covid-19 pandemic, the gala event with around 700 people could once again take place at Casino 2000 in Mondorf-les-Bains, in the presence of Minister of Sport Georges Engel.

Grand Duke Henri was not present at the ceremony on Thursday evening. He will meet the winners in January.

Female Athlete of the Year

With a whopping 537 points, Ni Xia Lian and Sarah De Nutte easily took home the title of "Female Athlete of the Year". The table tennis double had an exceptional year and won bronze medals at both the World Championship in Austin and the European Championship in Munich. Jenny Warling came in second with 228 points.

Male Athlete of the Year

The title of "Male Athlete of the Year" has been awarded since 1954, but never before have two athletes shared the award. 2022 marks the first time that two athletes won the award because they received the exact same number of votes. Both Bob Jungels and Dylan Pereira received 370 points and share this year's award. Jungels won, among other things, a stage in the Tour de France and came in 11th overall. Pereira notably became the champion in the 2022 Porsche Supercup.

We had Champion racecar driver Dylan Pereira talk about his journey and his recent Porsche Super Cup success on our Letz Talk Sport on RTL Play, as well as on Stephen Lowe's The Lunchbox, where he discussed what it takes to become a champion.

The men's national football team won the award for "Team of the Year". With 462 points, they came out on top against the women's national table tennis team (403 points). The Red Lions lost only one in six matches in League C of the Nations League, securing a remarkable second place behind Turkey. The women's national table tennis team made it to the round of sixteen at the team world championship, notably defeating the South Korean team, which currently ranks 4th in the world.

Third place goes to the women's national football team (209 points), who won three games during the qualifiers for the World Cup.

Coach of the Year

Female Athlete of the Year (9)