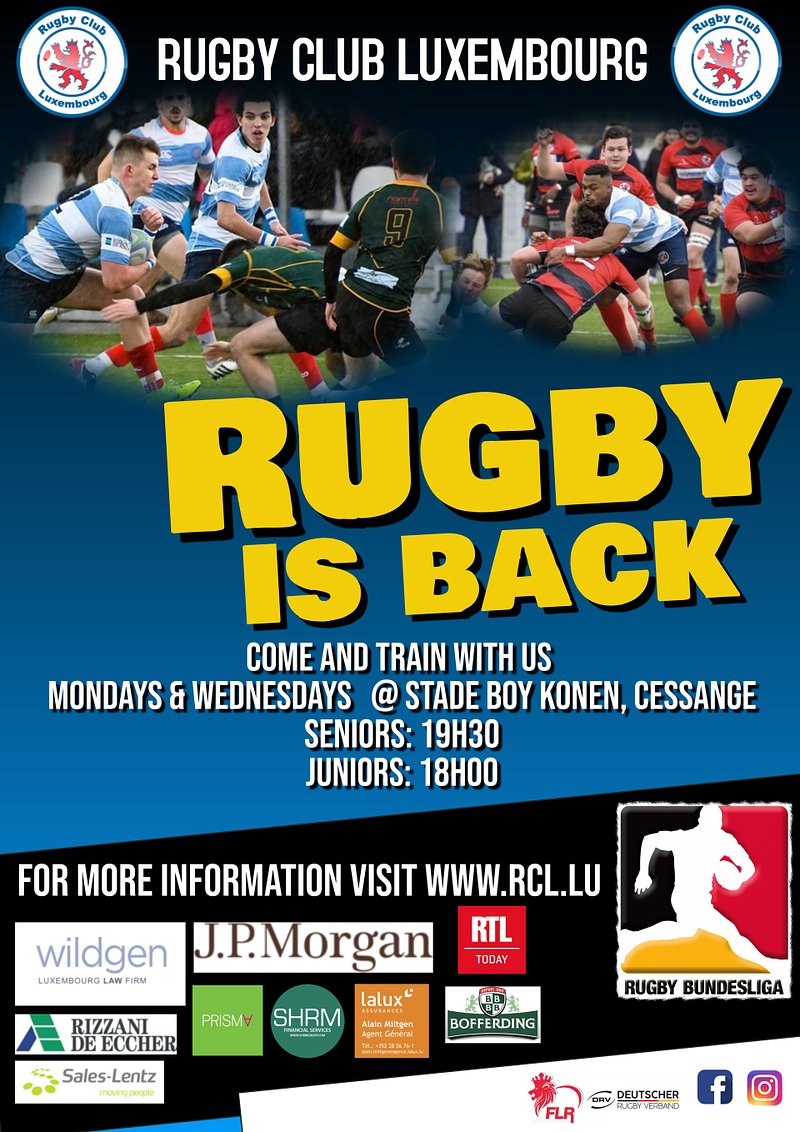 Training has resumed for Rugby Club Luxembourg ahead of the 2020/21 season.

Keen rugby players are invited to train with the club at the Stade Boy Konen in Cessange every Monday and Wednesday. Junior players can join sessions at 6pm, with seniors training at 7.30pm.

Rugby Club Luxembourg play in the South/West Bundesliga 1 league in Germany, and were 7th out of 8 teams when the 2019/20 season was terminated early as a result of the coronavirus pandemic.

The club is feeling optimistic about the year ahead, however. RCL issued the following press release:

Nothing seems to be certain these days, in a world where travel is disrupted, meetings are postponed and the rest of the 2019/20 rugby season is cancelled.

One thing that is certain though is the work that has gone on behind the scenes at Rugby Club Luxembourg during the lockdown period.

The appointment of James Kent as Director of Rugby and the return of Scott Browne to work alongside last year’s Head Coach Izak Saayman by the RCL board is another positive step to create a clearer pathway for the Junior and Senior programs of the club; who will now also train on the same days.

Browne, who previously played for Rugby Club Luxembourg and the National Luxembourg team, will lead the attack whilst former South African 7s international Izak Saayman will focus on the defensive structure.

RCL Director of Rugby, James Kent said: “Scott is someone who I have had a lot do with, and someone I regard very highly as a coach.”

“We have two quality coaches who have the experience, skillset, and personality that we believe will fit really well in the coaching team we have assembled.”

Saayman and Browne will be assisted by coaches Paul Sweetnam and Jonathan Flynn. Team manager Ted Davis and athletic therapist Julien Viscogliosi will also continue in their roles in preparation for the Bundesliga season, due to start in September.

Oisin Kilgallen, RCL’s Irish born Captain commented, ”The players are really looking forward to getting started with the new season and back on the pitch. This will be RCL’s third consecutive season playing top division rugby in Bundesliga 1 and there’s a huge
sense of optimism and belief building amongst the squad.”

— If you’re interested in playing or trying rugby in Luxembourg visit www.rcl.lu --