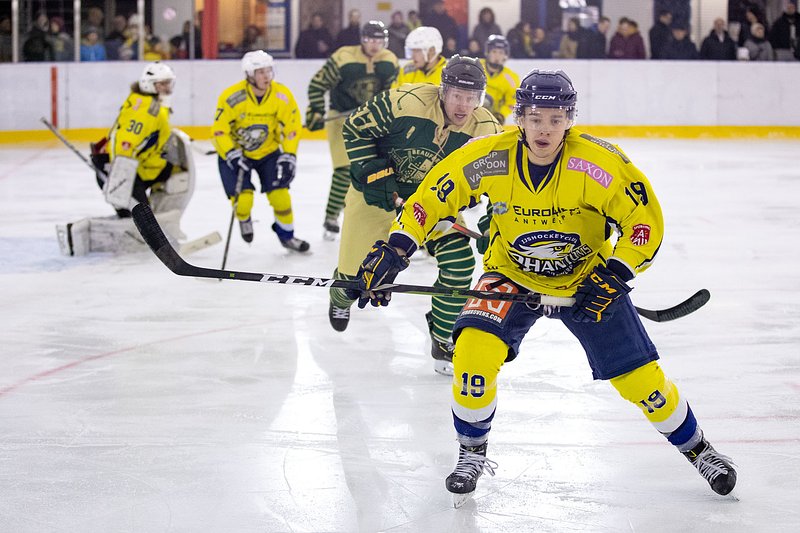 The Beaufort Knights moved to within one win of securing a playoff spot following a convincing 10-4 victory on Saturday night over the Antwerp Phantoms at Ice Park Beaufort.

After a heart breaking 2-3 defeat at the hands of Charleroi on February 8, the Beaufort Knights’ playoff aspirations seemed remote. They lay in 7th position out of 9 teams in the Belgian 1st Division.

Following that defeat, anything less than five-straight wins would result in the Luxembourgers missing out on a place in the semi-final round. That task was made all the more daunting as the Knights would face three playoff contenders in a row. Back then it seemed unlikely, but fast forward to today and the Knights only need one more victory to guarantee playoff hockey will come to Beaufort this season.

On Saturday night the Knights would face a much different task compared to the previous 3 fixtures. The opponent on this night was the Antwerp Phantoms, a team sitting at the bottom of the division having only collected six points all season.

The night began with a moving ceremony to honour 50 years of ice hockey in Beaufort with 11 of the founding players presented on the ice. The Antwerp Phantoms showed tremendous class by also shaking hands with the legends, a gesture met with loud applause from the estimated 460 home fans. Luxembourgish table tennis champion Sarah De Nutte made the traditional ceremonial puck drop and the game could begin.

Beaufort were the strong favorites to win and they got off to the best possible start in the first period.

At 03:18 captain, Claude Mossong, eased any pregame nerves when he received a pass from Ben
Houdremont close to the Phantoms goal and fired a quick wrist shot into the top corner.

The one way traffic continued for the remainder of the period as a Benny Welter double and a terrific mid-air re-direct from Brain Schleimer put the Knights 4-0 up going into the first intermission.

In the second period the Phantoms managed to fight their way back into the contest with Dean De Souter finding space to snipe a goal from a nice pass by Dylan De Leenheer. Unfortunately for Antwerp the gap was cut to 3 for only 3 minutes as Claude Mossong, who at times seemed unstoppable, smashed a quick shot over the glove of Antwerp goalie, Cisse Vander Weyde.

The Knights’ siege of Antwerp’s net continued when Mirko Mosr took a steal from Benny Welter then fired a laser into the top left corner to make it 6-1 to Beaufort.

Luxembourg was rocking and although Antwerp found a second goal through David Veeckman the Knights once again showed their superiority when Ben Houdremont made it 7-2 to close out the second period.

With a five goal lead one could forgive the Beaufort Knights for easing the pressure a little in the third period. That’s just not in Sacha Backes’ nature though and 14 seconds into the period he collected the puck, strode down the right hand side and ripped the 8th goal of the night past Vander Weyde.

Once again however the Phantoms proved they would continue to fight until the final buzzer and they pulled another goal back from Jaron Blomme at 42:48 to make it 8-3. Sacha Backes has quickly become a star in the Belgian league with his combination of skill and speed. At 48:34 he would display perhaps his most valuable attribute, his ability to read the game and anticipate events.

With the Knights defending a penalty to François Schons. Backes intercepted a pass from an Antwerp defenceman, took off at speed then calmly fired home the 9-3 goal. The Antwerp Phantoms, to their credit, yet again would not go away and at 53:10 Toon Gabriels reacted quickest to score and make it 9-4 and plant a small seed of doubt in the minds of the Luxembourgish players.

Antwerp pressed for another goal, controlling the play for a lot of the remaining minutes. A miscued slap shot from a Phantoms defenceman at 56:53 however put the puck on François Schons stick and with a quick pass up the center of the ice he sent Claude Mossong into a one on one with a Phantoms defenceman. With a slick deke from left to right then back to left, Mossong left the defenceman falling over his own feet before slotting the puck between the legs of the Antwerp goalie to complete the hat trick and send the Beaufort Ice Park into party mode as the final buzzer sounded to give the Knights a crucial 10-4 victory.

This coming Saturday 14th March at 19:30 the Knights play host to the Liege Bulldogs who currently sit last in the league. With Leuven defeating Mechelen on Sunday night the final two playoff spots will be contested by three teams. The Kortrijk Spurs, Leuven Chiefs and the Beaufort Knights. A dream that seemed unthinkable a month ago for the Knights is now within reach. The deal is simple, win and you’re in.

In other Luxembourg hockey news. Tornado Luxembourg took a commanding 6-3 lead in their second round playoff series in the French Division 3 against Caen. The away leg will be played this coming Saturday as Tornado hope to reach the third round for the first time.

The Beaufort Knights second team were 11-0 winners over the Tornado women’s team on Monday 2 March in front of an audience of close to 70 people at Patinoire de Kockelscheuer. Impressive considering the 9.15pm start time on a Monday night.