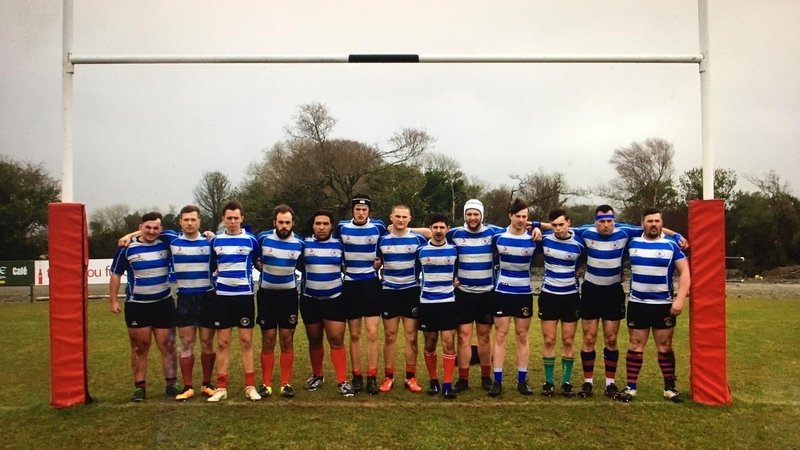 The Club were invited by Tournament Director and former RCL Player Darren Enright.

The team arrived on Friday and stayed in the beautiful 4 star Scott’s Hotel in downtown Killarney.

On Saturday morning, after a fine Full Irish Breakfast, club volunteers kindly transported the RCL squad to the pitch.

As the team warmed up the wind and rain set in, and by the time the first match started the latest of many Irish winter storms was in full force with 65km gusts.

The RCL squad led by Louis Paul Gamache and reinforced by players borrowed from Kerry Side Castle Island started against the home side.

RCL scored from the Kick off with Chobe Sweetnam breaking through and setting Gamache free to score under the posts, Edwards knocking over the extras. Minutes later the RCL captain scored again from an interception with Edwards again made the conversion.

The remainder of the match saw Killarney come back strongly while RCL struggled with the conditions and an unfamiliar line up, second row Kai Sweetnam and Sean Butler put in a series of try saving tackles to keep the final score 14-0.

As the weather conditions deteriorated even more the final approached against Kenturck Rugby Club who had made the journey across Munster from Cork City.

Kenturck had a much bigger pack, while RCL probably had a little more pace in the backs. With biblical horizontal rain hitting the pitch, despite playing with the wind, RCL were unable to move the ball wide and the gigantic Cork forwards powered over early to score and continued to dominated to lead 5-0 at half time.

With no way round the opposition and a kicking game made impossible playing into the wind, RCL had no option but to try and take on the forwards physically.

RCL pushed hard and Ken Meylander almost scored before the referee had to separate honorary RCL player for the day Harry James and a really tall guy with a beard from Kenturck.

In the meantime, Olivier Weisberger had to leave the field for a HIA but RCL were awarded a scrum five meters from the Cork Try line, Chobe managed to break through several tackles to score and Edwards slotted a tremendous conversion.

Kenturck immediately responded with a try of their own to make it 14-10 and to set up a nail biting final two minutes.

RCL defended heroically, knowing one more try for Kenturck would be enough for them to win,  but as the ref called last action Kenturck found themselves with a big overlap and RCL defence were scrambling.

Luckily the final pass could not go to hand, the ball was dropped, the final whistle was blown and the celebrations started.

The trophy was presented by the Killarney Club Chairmen Ger “Not the German” and the celebrations really started.

The players met up The Killarney team and continued to celebrate in the early hours of Sunday morning, at the Grand Hotel.

Many thanks for all the players who made the effort to travel, tour support Martyn Edwards and mostly our fantastic hosts.

The squad promised Darren Enright they would return in 2021 to defend their title.