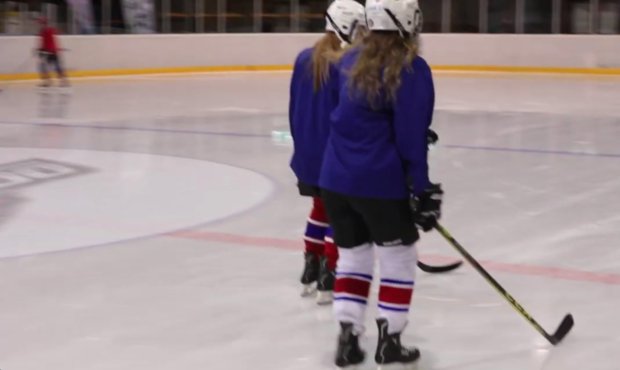 The event will take place at the Kockelscheuer ice rink (Patinoire de Kockelscheuer), just south of the capital city, as part of the Global Girls’ Game weekend, now in its fourth edition, with the puck going around the world in a record number of 40 countries.

Luxembourg first joined the International Ice Hockey Federation in 1912, but because the country is one of Europe’s smallest, there are only 432 registered players. These players have to share the very limited ice time available at Kockelscheuer, which has two indoor ice rinks. One of those two rinks is virtually full-time devoted to public skating, heavily dominated by teenagers.

Another option for playing ice hockey is about one hour away to the north at the outdoor rink in Beaufort.

It took exactly 80 years until Luxembourg managed to assemble a men’s national team to play in the IIHF Ice Hockey World Championship program in 1992. Today the team is ranked 42nd in the IIHF Men’s World Ranking.

Due to the restrictions in size and rinks there are just a handful of teams in the country. The strongest club, Tornado Luxembourg, plays many more away games in the French system than it does in domestic competition. For women’s hockey there have historically not been sufficient players. So far. The hockey family around the Luxembourg’s Ice Hockey Federation (FLHG) wants to change this.

“We started with a beginners’ team that practises on Mondays at 9:15pm,” said Christophe Hernandez, a former Luxembourg national team player who coaches the team. The beginner’s session has morphed into more of an intermediate session after many more experienced players showed up, revealing that there were more experienced hockey players wanting to play than the previously-available ice time allowed, but also undermining the initial “beginners” concept.

This team approached the FLHG with the aim of building a women’s team. Currently there are eight to ten female players showing up at practices – not enough to play a game. These players are hopeful that this promotional video will entice more women and girls to join the coolest sport on earth. The women’s team has also reached out to women players in the nearby German city of Trier. “For the moment it’s just [about] building up a team and then we’ll see,” said Hernandez.

The Global Girls’ Game will start at Kockelscheuer on Sunday at 10.00am, with a women’s team and a girls’ team representing Luxembourg. There will be 40 Team Blue vs. Team White games in 40 countries around the world playing for an aggregate score starting Saturday morning in New Zealand and ending Sunday night in the United States.

But it will less about the score than about the message to the world that women’s ice hockey is cool and can be played everywhere. One of the Global Girls’ Game venues to demonstrate this will be Luxembourg as the newest country on the planet with a women’s hockey team.

And hopefully the new ice hockey players will be joined by more women and girls soon at their weekly practice.

Click here for the full schedule of the Global Girls' Game.