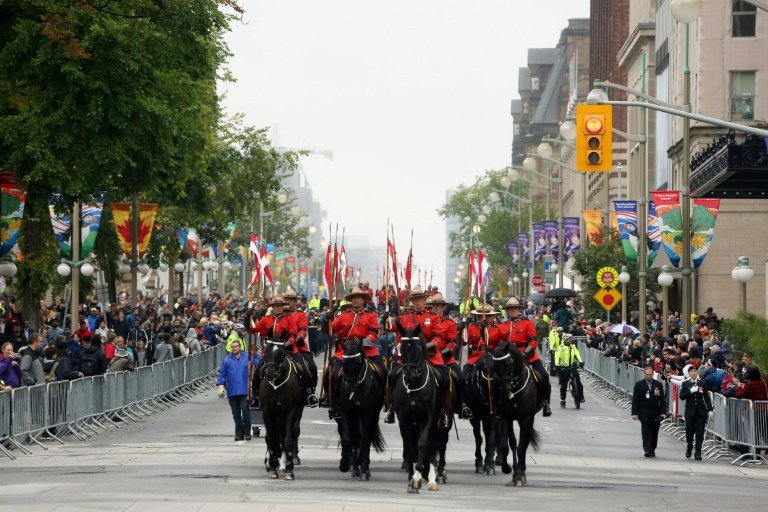 Thousands of Canadians braved cold and rain to say goodbye to Queen Elizabeth II on Monday, bringing out Corgis and fancy brooches as they lined the streets of the capital for a parade.

People stood solemnly beneath a sea of umbrellas in Ottawa to watch Royal Canadian Mounted Police officers on horseback and a military brass band march past Parliament -- a few hours after her London funeral.

Monarchists, public servants given the day off, and others who were simply fond of the queen and wished to pay their respects -- they all huddled along the parade route, gripping steaming cups of coffee to warm their hands as they shared fond memories of the only monarch most had ever known.

As Canada is a Commonwealth country, the queen was its head of state.

"She's always been a bedrock through times of change, upheaval and instability," said Alexander Kerrison, 32, in attendance with his wife and bundled-up newborn.

"Through ups and downs," Elizabeth remained "poised and elegant... and stayed the course, and I respect her for that," echoed Noella Trimble, adding: "I just wanted to be here to say goodbye to Canada's queen." 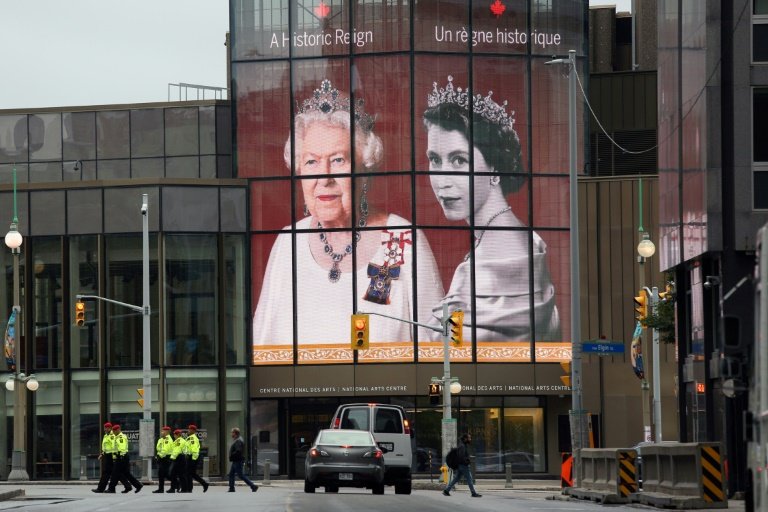 A policeman nearby was handed camera after camera from people in the crowd asking him to snap pictures of them from his vantage.

Big screens set up throughout the downtown area flashed images of the queen.

The day had been declared a national holiday by Prime Minister Justin Trudeau, but most businesses remained open.

Gordon Pringle told AFP he came out "to bow my head and pay tribute to a great hero, somebody who in our lifetime was a constant for civility and dignity."

"She was my queen my whole life," said Rita Brown, 66, undeterred by a constant drizzle and warnings of thunder showers.

"She was like an international grandmother to us all," said Janet Davidson, who travelled with her husband Don from Vancouver for the commemoration.

In the skies above, Second World War vintage aircraft along with modern fighter jets were to fly past Parliament and the Christ Church Cathedral where a commemorative service was also held, but they were grounded at the last minute due to storm warnings. 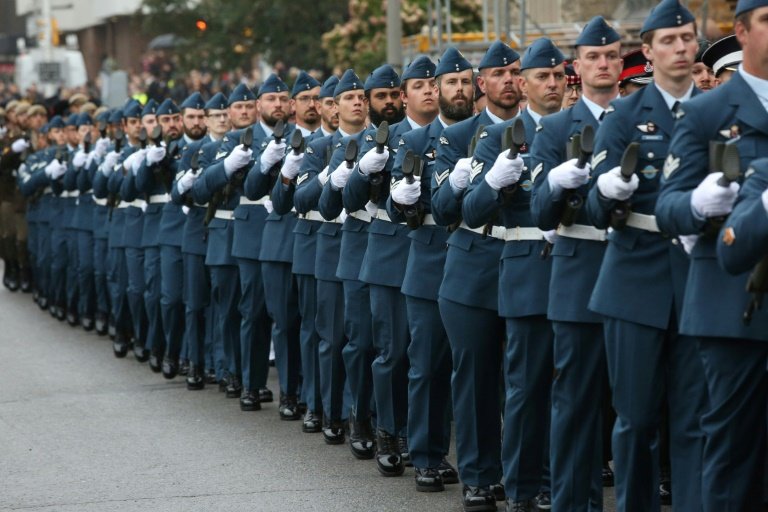 As the horses and riders in red serge went past, a Corgi with a blue and white polka dot tie poked his head through peoples' legs for a better view.

His owner Mitchell Goldie, 25, had brought Winston to a Corgi gathering the day before as a tribute.

"We (Ottawa Corgi owners) wanted to get together and do something to honour her and celebrate her life and of course her love of Corgis," he said.

A few dozen Corgis came out for the event in Major's Hill park overlooking Parliament. "They're a big dog in a small dog package," Goldie commented.

Following the memorial procession, hundreds of dignitaries crammed into Christ Church Cathedral for a service with music by Ginette Reno and Rufus Wainwright, as well as an address by former prime minister Brian Mulroney.

The sounds of bagpipes and horns filled the air.

Although Canadians' relationship with the monarchy has been increasingly strained, they were attached to Queen Elizabeth right to the end -- and she to Canada, having visited the country on more occasions than any other. 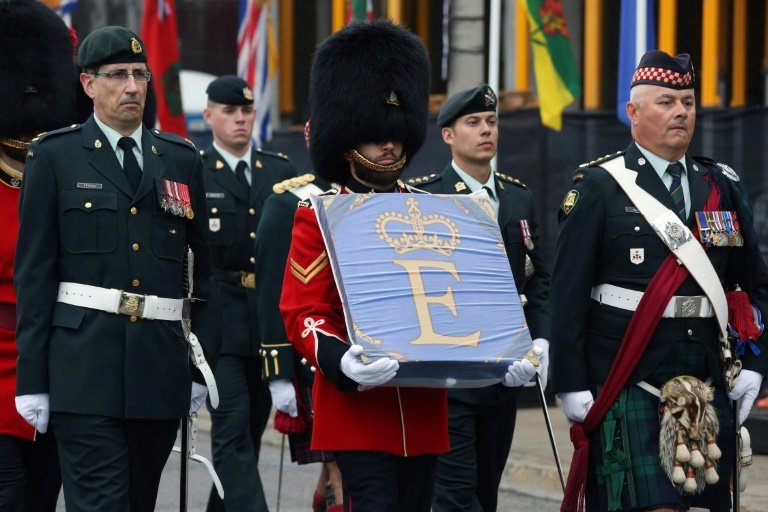 A member of the Governor General's Foot Guards carries the Queen Elizabeth Canadian flag during a memorial service for Queen Elizabeth II in Ottawa, Canada on Monday / © AFP

More than 52,000 Canadians sent messages through an online book of condolences.

"She was the head of state and she was our queen, of course," Mulroney said in a eulogy. "But I believe she felt special love, a very deep love for Canada, for its diversity, its geography, and its history."

Mulroney recalled the queen telling Ronald Reagan in 1983 as she prepared to head to Vancouver following a state visit to the United States, "I'm going home to Canada."