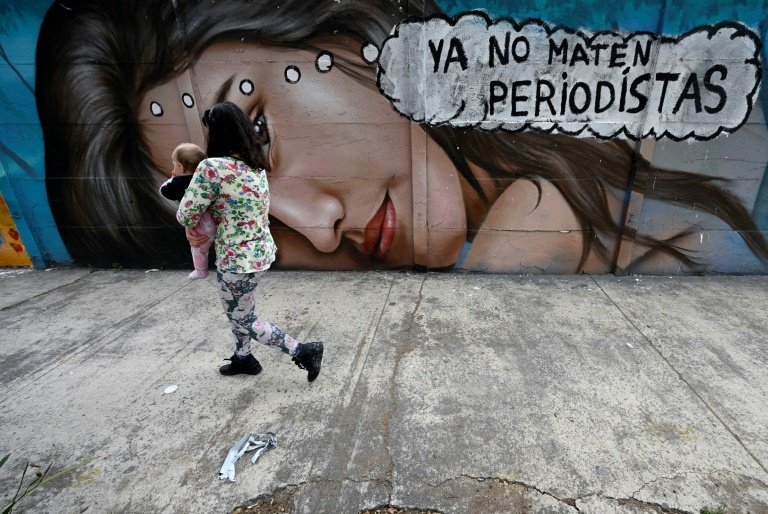 A Mexican reporter was shot dead on Wednesday in the violence-plagued northeastern state of Tamaulipas -- the 12th journalist killed so far in a particularly bloody year for the country's press.

Antonio de la Cruz, who worked for the newspaper Expreso, had frequently denounced alleged acts of corruption by politicians in his posts on social media.

His wife and daughter were injured in the attack, which took place as the reporter was leaving his home in Ciudad Victoria.

"We must not allow more attacks on journalists and activists. These crimes will not go unpunished," President Andres Manuel Lopez Obrador's spokesman, Jesus Ramirez, tweeted.

Expreso demanded "justice from authorities at all levels."

In 2018, another one of the newspaper's journalists, Hector Gonzalez, was beaten to death.

This year is already one of the deadliest yet for the Mexican press, prompting calls for an end to a culture of impunity.

"The prevailing impunity in the murders of journalists has become an effective weapon for criminals," said Jorge Canahuati, president of the Inter American Press Association.

Doctors were fighting to save the life of De la Cruz's daughter, State Governor Francisco Cabeza de Vaca said, urging prosecutors to ensure "that this cowardly crime does not go unpunished."

De la Cruz, who had been a journalist for 15 years, was also a spokesman for a political party, Movimiento Ciudadano.

Gustavo Cardenas, a state legislator for the party, described De la Cruz as "a family man, a good man" who had sought to expose alleged corruption by local authorities.

"The main suspects are in the state government... I have not the slightest doubt that a significant responsibility falls on these men," he said.

Media rights group Reporters Without Borders urged authorities to carry out "a prompt investigation" into the murder and whether it was linked to De la Cruz's journalistic work.

The Tamaulipas prosecutor's office confirmed the murder and said that it was investigating the case under protocols for dealing with crimes against freedom of expression.

More than 150 journalists have been murdered since 2000 in Mexico, one of the world's most dangerous countries for the media, with only a fraction of the crimes resulting in convictions.

The United States and the European Parliament have urged Mexico to ensure adequate protection for journalists following the recent string of killings.

Lopez Obrador has vowed "zero impunity" for the crimes.

Before de la Cruz's murder, the government had considered that nine of this year's victims were killed because of their media work.

It has reported the detention of 26 suspects in the murders, nine of whom have been formally charged.

Tamaulipas is one of the Mexican states most affected by violence involving drug cartels, which have repeatedly tried to silence the press with attacks, according to rights groups.

In 2012 a car bomb exploded in front of Expreso's offices, although nobody was injured.

In 2018, a human head was left outside its offices.