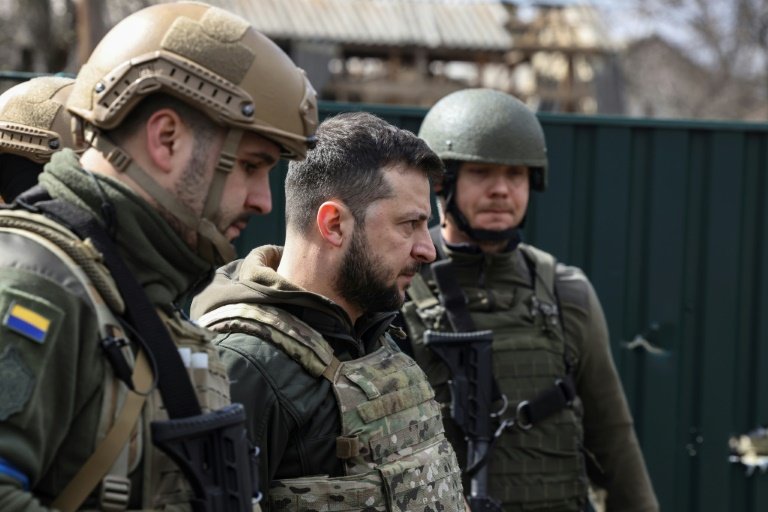 Ukraine's president on Monday urged the world to acknowledge "genocide" at the hands of Russian troops after bodies were discovered in a town outside Kyiv, sparking global outrage.

US President Joe Biden called for a "war crimes trial" over the alleged atrocities in Bucha and said he would seek "more sanctions" against Moscow, as EU momentum built for a tougher response on top of already unprecedented sanctions against Russia over the war.

Ukrainian President Volodymyr Zelensky accuses Russian troops of being behind the killings, but the Kremlin has denied any responsibility and suggested images of corpses were "fakes". 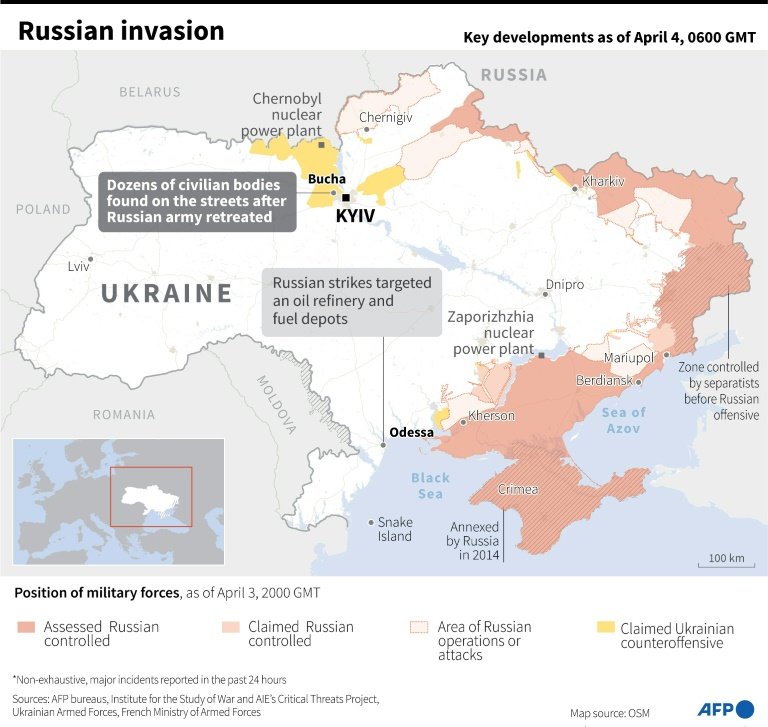 "These are war crimes and it will be recognised by the world as genocide," Zelensky said Monday as he visited the town, where the corpses, some with their hands bound behind their backs, were discovered over the weekend near Kyiv.

"You stand here today and see what happened. We know that thousands of people have been killed and tortured with extremities cut off, women raped, children killed," he told reporters, wearing a bullet-proof vest for a rare visit outside the Ukrainian capital.

Moscow has called for a UN Security Council meeting on what its deputy ambassador to the body called a "heinous provocation of Ukrainian radicals in Bucha."

"We have to gather all the details" to be able to have a trial, the US president added.

The scale of the killings is still being pieced together. On Sunday, Ukrainian prosecutor general Iryna Venediktova said 410 civilian bodies had been recovered in the wider Kyiv region after Russian troops pulled back.

In Bucha, the local mayor said 280 people were buried in mass graves because they could not be buried in cemeteries that were within firing range.

AFP on Saturday saw the bodies of at least 22 people in civilian clothes on a single street in Bucha.

Satellite imagery firm Maxar released pictures it said showed a mass grave located in the grounds of a church in Bucha.

Eventually, they were able to retrieve the bodies, he said. "We dug a mass grave with a tractor and buried everyone." 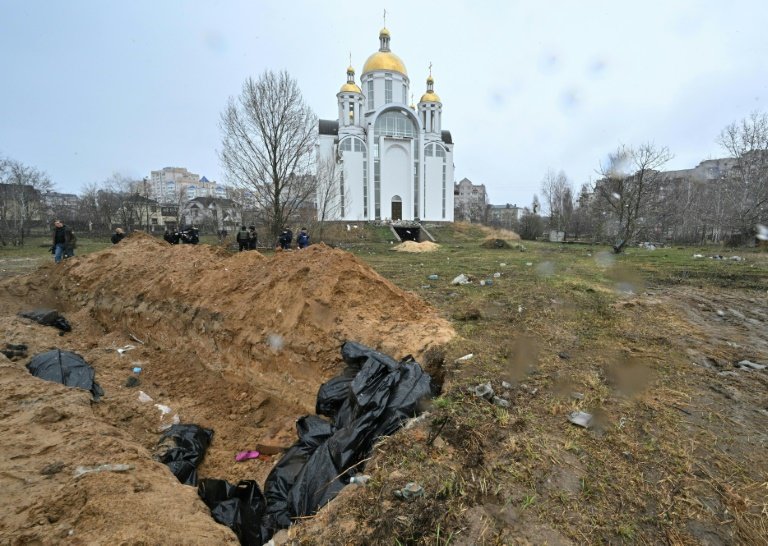 Russia has redoubled its efforts in Ukraine's south and east, including strikes Sunday on the strategic Black Sea port of Odessa, which Moscow said targeted an oil refinery and fuel depots.

The mayor of the south-eastern port city of Mariupol said Monday 90 percent of the city had been destroyed since being besieged by Russian forces, trapping some 130,000 residents who have not yet fled.

"We are planning to evacuate the remaining residents, but we cannot do it today" because of "incessant" bombings, Vadym Boichenko told journalists.

Attacks on two other towns in southern Ukraine on Sunday killed eight people and wounded 34, prosecutors in Kyiv said.

One EU official told AFP that a new sanctions package on Russia could be discussed by foreign ministers, either on the sidelines of a NATO meeting on Wednesday and Thursday, or at early next week. 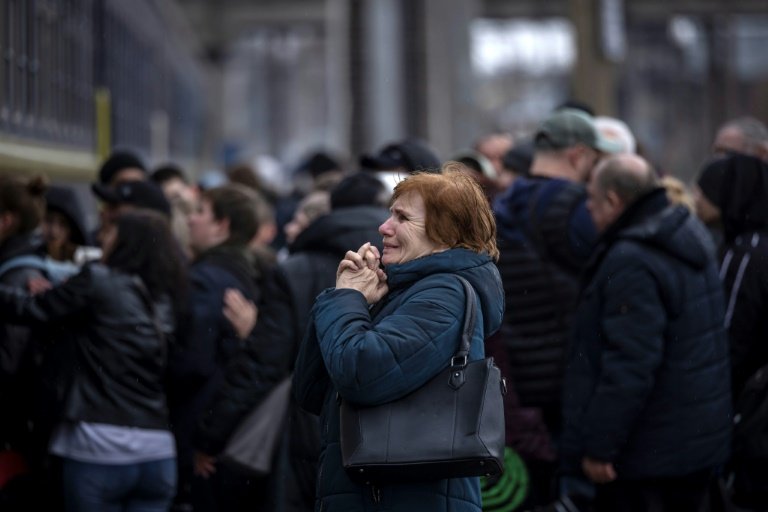 In the eastern city of Kramatorsk, women, children and the elderly boarded trains to flee / © AFP

But Germany warned that cutting off the supply of Russian gas to Europe was not yet possible, despite calls in several EU countries that the measure was necessary to face down Russia.

- 'Something terrible is coming' -

"We have to cut all economic relationship to Russia, but at the moment, it's not possible to cut the gas supplies. We need some time," German Finance Minister Christian Lindner said as he arrived for talks with his eurozone counterparts in Luxembourg.

Europe's worst conflict in decades, sparked by Russia's invasion on February 24, has already killed 20,000 people, according to Ukrainian estimates.

Nearly 4.2 million Ukrainians have fled the country, with almost 40,000 pouring into neighbouring countries in the last 24 hours alone, the UN refugee agency said.

In the eastern city of Kramatorsk, women, children and the elderly boarded trains to flee the Donbas region and out of the path of the Russian advance.

"The rumour is that something terrible is coming," said Svetlana, a volunteer organising the crowd on the station platform.

The UN's top humanitarian envoy Martin Griffiths is expected in Kyiv after arriving in Moscow on Sunday in an attempt to halt the fighting.

And talks were scheduled to resume by video on Monday, though Russia's chief negotiator Vladimir Medinsky said it was too early for a top-level meeting between Zelensky and Putin.

He said Kyiv had become "more realistic" in its approach to issues related to the neutral and non-nuclear status of Ukraine, but a draft agreement for submission to a summit meeting was not ready.