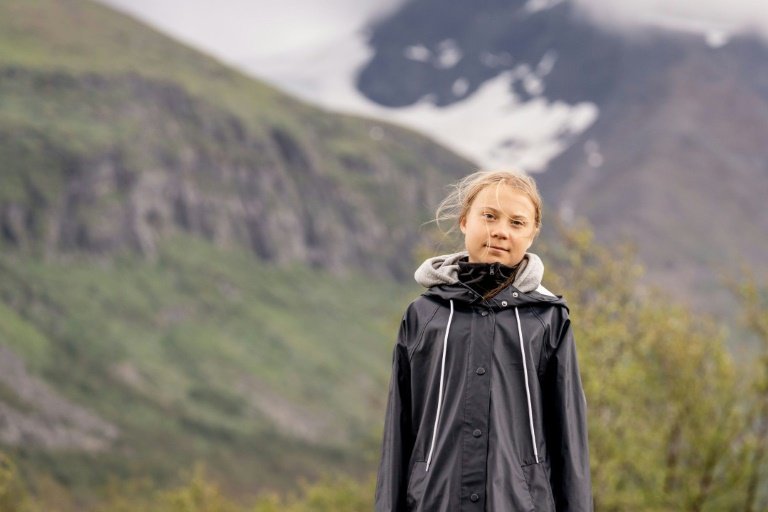 More than 400 "climate strikes" are planned across Germany, with the Swedish Thunberg, who inspired the movement, expected to speak outside the Reichstag parliament building / © TT News Agency/AFP/File

Tens of thousands of climate activists, including Greta Thunberg, rallied in cities across Germany Friday ahead of the weekend general election to crank up the pressure on the candidates to succeed Angela Merkel.

Speaking at a rally in front of the Reichstag parliament building in the run-up to Sunday's poll, Thunberg told cheering Fridays for Future youth supporters that they needed to hold Germany's political leaders to account past election day.

"It is clearer than ever that no political party is doing close to enough... not even their proposed commitments are close to being in line with what would be needed to fulfil the Paris Agreement" on curbing climate change, she said.

"Yes, we must vote, you must vote, but remember that voting only will not be enough. We must keep going into the streets."

The head of Fridays for Future's German chapter said the country, one of the world's top emitters of greenhouse gases, had an outsize responsibility to set an example, with time running out to reverse destructive trends.

"That is why we are calling this the election of a century," Luisa Neubauer told AFP.

The race has boiled down to a two-way contest between Social Democrat Olaf Scholz, the moderate finance minister, and Armin Laschet from Merkel's conservative Christian Democrats.

Polls give Scholz a small lead of about 25 percent over Laschet at around 21 percent, with the candidate from the ecologist Greens, Annalena Baerbock, trailing in the mid-teens.

Despite the urgency of the climate issue for a majority of Germans, particularly in the aftermath of deadly floods in the west of the country in July, this has failed to translate into strong support for the relatively inexperienced Baerbock.

More than 400 "climate strikes" are planned across Germany, with the Swedish Thunberg, who inspired the movement, expected to speak outside the Reichstag parliament building.

Gathering under the banners "We are young and need the world!" and "Everything for the climate", the activists will argue the "climate crisis is this century's biggest problem".

The activists will be part of a global climate strike in more than 1,000 communities around the world, Fridays for Future said.

Their central demand is to limit the warming of the Earth to maximum 1.5 degrees Celsius (2.7 Fahrenheit) as laid out in the 2015 Paris climate accord.

The Paris agreement set a goal of reducing global warming by two degrees Celsius above pre-industrial levels with an aspiration to go further and cap the rise to 1.5 Celsius.

Despite Merkel's vocal support of climate protection measures, Germany has repeatedly failed in recent years to meet its emission reduction targets under the pact.

In a landmark ruling in April, Germany's constitutional court found the government's plans to curb CO2 emissions "insufficient" to meet the targets of the Paris agreement and placed an "unfair burden" on future generations.

The Fridays for Future movement launched global school strikes more than two years ago arguing that time was running out to stop irreversible damage from the warming of the planet.

In September 2019, it drew huge crowds in cities and towns around the world including 1.4 million protesters in Germany, according to organisers.

The outbreak of the coronavirus pandemic put the brakes on its weekly rallies but the election campaign in Europe's top economy has revitalised the movement.

"The climate crisis cannot be solved through party politics alone," Thunberg told reporters ahead of her appearance in Berlin.

"We can't just vote for change, we also have to be active democratic citizens and go out on the streets and demand action."

Around 60.4 million Germans are called to the polls on Sunday and most voters cite climate protection among their top priorities.

All three leading parties have said they aim to implement a climate protection agenda if elected, with the Greens presenting the most ambitious package of measures.

However the Fridays for Future activists have said even the Greens' official programme falls short of what is needed to stick to the 1.5 degree Celsius temperature rise.

The Greens want to end coal energy use by 2030 instead of the current 2038. They also want the production of combustion engine cars to end from the same year.

While the party is expected to fall far short of its ambition to win the election Sunday and place Baerbock in the chancellery, polls indicate it has a good chance of joining a ruling coalition as a junior partner under Scholz or Laschet.