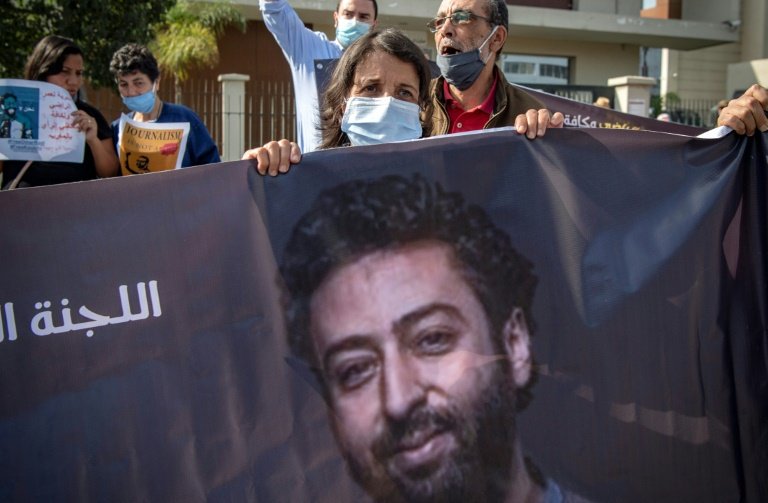 Omar Radi's mother holds a banner picture of her son at a protest in Casablanca in this file picture from September 22, 2020 / © AFP/File

A Moroccan court on Monday sentenced journalist and human rights activist Omar Radi to six years in jail on charges of espionage and rape, stirring condemnation from rights groups.

Rabat denied the report at the time, and on Monday the authorities "categorically rejected" using Israeli spyware to monitor critics at home and abroad.

Radi, 35, is a known vocal critic of the authorities and has been detained since July 2020.

His arrest and detention sparked protests by rights activists, intellectuals and politicians at home and abroad.

He faced charges of rape and "undermining the internal security of the state" in two separate cases investigated separately but judged together.

Radi was also accused of having received "foreign funds" in exchange for providing "intelligence" information to a third party.

When Monday's verdict was announced, protests erupted in court.

"This prosecution is motivated by revenge, not by a quest for the truth," Radi himself said.

Amnesty in a statement labelled the proceedings "flawed" and "not justice", calling for "a fair retrial in line with international standards".

At a previous hearing in June, the judge questioned Radi about text messages he had exchanged with a Dutch diplomat in 2018.

Radi has protested his innocence throughout, and last month told the court the case against him was void and "did not justify my imprisonment for nearly a year".

He said he was the victim of people "who consider themselves above the law", and rejected both charges of rape and espionage.

"Where is the crime in a journalist meeting and exchanging (views) with an official from a foreign country?" he asked.

A government statement denied that Rabat had "infiltrated the phones of several national and international public figures and heads of international organisations through computer software".

A joint investigation by several Western media outlets said on Sunday that activists, journalists, businessmen and politicians around the world had been spied on using the software developed by Israeli firm NSO.

The media outlets, including The Washington Post, The Guardian and Le Monde, drew links between NSO Group and a list of tens of thousands of smartphone numbers.

Many numbers on the list were clustered in 10 countries, among them Morocco.

Rabat on Monday expressed its "great astonishment" at the reports, calling them "false allegations devoid of any foundation".

Also on Monday, the same court in Casablanca handed down six months in jail to another journalist, Imad Stitou, 32, who was said to have been present with Radi when he allegedly raped a woman.

Radi had said the sex was consensual.

Stitou reacted by saying: "Justice preferred to ignore the truths told within" the courtroom.

Radi's is the latest in a series of harsh sentences passed against journalists in the North African kingdom, and also in neighbouring Algeria.

Authorities in both countries have detained and tried journalists on charges ranging from harming national interests to sexual assault.

Last week, the United States criticised its ally Morocco's rights record, after it gave a five-year jail term to another journalist, Soulaimane Raissouni.

Media watchdog Reporters Without Borders (RSF) has ranked Morocco 136 out of 180 countries in its 2021 World Press Freedom Index.

A Human Rights Watch report last year sounded the alarm at the erosion of press freedoms in both Morocco and neighbouring Algeria.