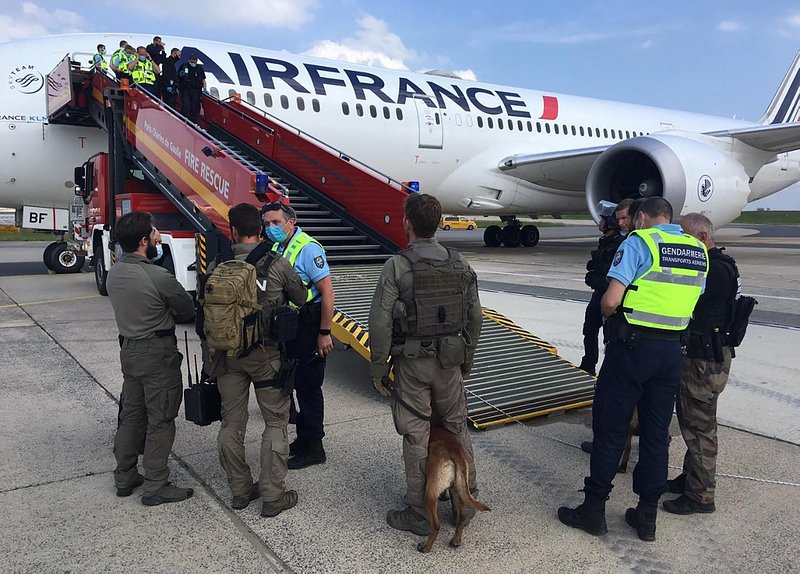 A handout photo made available by the Gendarmerie Nationale shows gendarmes from the GIGN and air transport unit on the runway of Roissy-Charles de Gaulle airport after they control passengers following a bomb threat on a flight from Chad to Paris on June 3, 2021. / © GENDARMERIE NATIONALE / AFP

An Air France plane flying to Paris on Thursday received a mid-air bomb threat, causing a security scare that saw a fighter jet scrambled to escort it to Charles de Gaulle airport.

The plane, travelling from N'Djamena in Chad, was searched after landing in the French capital and no device was found, Interior Minister Gerald Darmanin announced on Twitter.

A spokesman for the air force told AFP that the pilot of the plane had informed air traffic control that he had received a bomb threat over the radio during the flight.

"This type of threat is unusual and will lead to an investigation," the spokesperson said.

A Rafale fighter jet was scrambled to escort the plane to Charles to Gaulle airport where all of the passengers were disembarked safely.

An airport source said that the plane parked in a special area reserved for security operations, and searches of the seating area and the baggage bays took place.

Elite fast-response security forces were on the scene briefly, but departed, the source said.

A previous version of this article stated that a suspected explosive device had been discovered. It has been amended to clarify that there is no confirmation of a bomb on board, but the threat is being investigated.