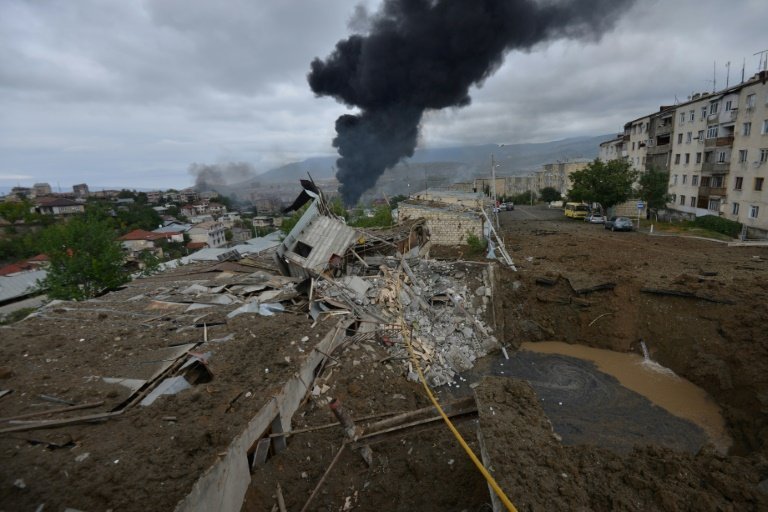 Armenia said that Nagorno-Karabakh's main city Stepanakert, which has been under shelling since Friday, was hit again on Sunday and AFP journalists said there were regular explosions and clouds of black smoke rising in parts of the city.

Azerbaijan's defence ministry said meanwhile that Armenian forces had shelled Ganja, a city of more than 330,000 in western Azerbaijan, with footage showing buildings in ruins.

On Sunday night, Hikmet Hajiyev, an adviser to President Ilham Aliyev, wrote on Twitter that Armenians launched "missile attacks against Azerbaijani civilians and civilian infrastructure" in the industrial city of Mingechavir and the Absheron district, some 80 kilometres (50 miles) from capital Baku.

Stepping up its bellicose rhetoric, Karabakh's presidency threatened to "expand subsequent (military) actions to the entire territory of Azerbaijan".

Each side accused the other of targeting civilian areas, as the conflict widened a week after heavy fighting broke out in the decades-old dispute over the ethnic-Armenian region. 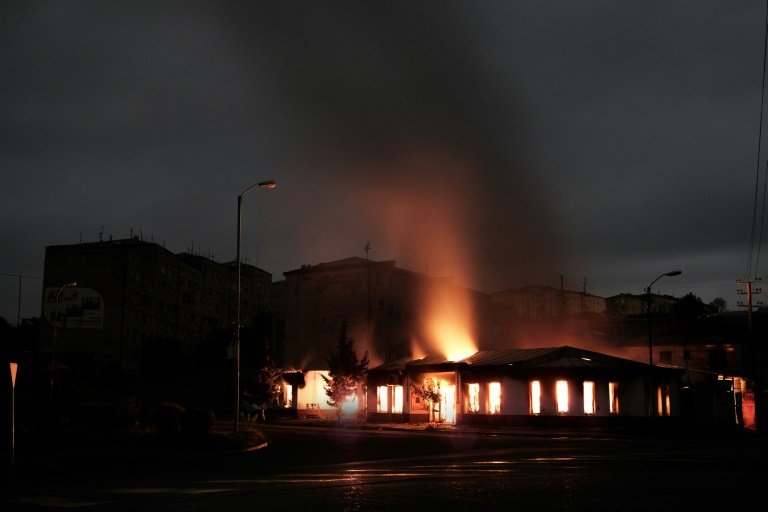 Armenia and Azerbaijan have resisted international calls for a ceasefire and clashes have intensified in recent days, with both sides claiming victories on the front and saying they are inflicting heavy losses.

In a fiery address to the nation, Azerbaijani President Aliyev set conditions for a halt to the fighting that would be near impossible for Armenia to accept.

He said that Armenian forces "must leave our territories, not in words but in deeds," provide a timetable for a full withdrawal, and recognise the territorial integrity of Azerbaijan.

"Conditionality is not acceptable, (Aliyev) must renounce the use of force and engage constructively in negotiations without imposing maximalist positions," Armenian foreign ministry spokeswoman, Anna Nagdalyan, told AFP.

Sirens were sounding and explosions could be heard at regular intervals in Stepanakert, as residents took shelter, including several families in the basement of the city's Holy Mother of God Cathedral.

Armenia's foreign ministry said Stepanakert and other towns had been hit, accusing Azerbaijani forces of "the deliberate targeting of the civilian population".

There were reports of dead and wounded civilians in Stepanakert and the historic town of Shusha. 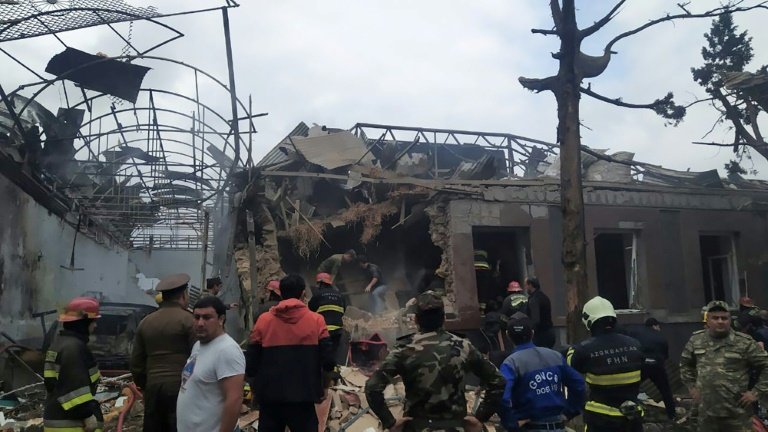 The city of Ganja, in western Azerbaijan, has come under fire, Baku said / © Azerbaijani presidency/AFP

Azerbaijan said Ganja was under shell fire, including from areas outside of Karabakh in Armenian territory, with at least one civilian killed.

Azerbaijan's ally Turkey accused Armenia of "targeting civilians" in Ganja and reiterated support for its fellow Turkic and Muslim country as "one nation, two states".

"I call on the residents of these cities to immediately leave," Harutyunyan said in a post on Facebook.

The International Committee of the Red Cross on Sunday condemned the reports of "indiscriminate shelling and other alleged unlawful attacks using explosive weaponry in cities, towns and other populated areas".

Azerbaijan claims to have taken control of a string of settlements in recent days as well as a strategically important plateau.

On Sunday Aliyev said his forces had retaken the town of Jabrayil, part of an area outside Karabakh seized by the separatists in the 1990s as a buffer zone, hailing it as an important victory. Armenia denied the claim. 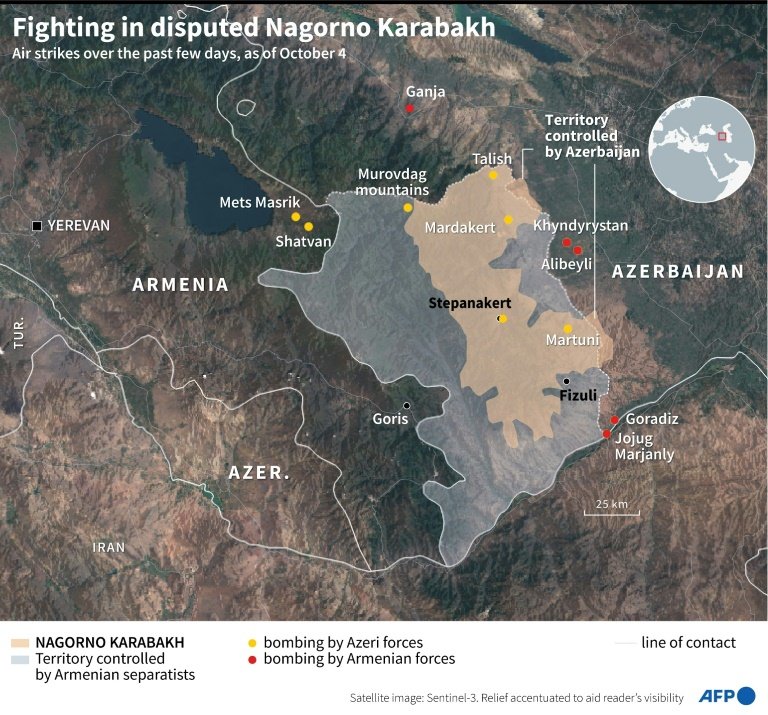 A map of Nagorno Karabakh, Armenia and Azerbaijan, locating bombings by both sides in recent days / © AFP

Authorities in both countries have reported more than 250 dead since the fighting began, including 42 civilians.

Armenian separatist forces have reported more than 200 dead -- including 51 on Saturday -- while Azerbaijan has not released any figures on its military casualties.

Azerbaijan said Sunday that two civilians had been killed in shelling on the southern town of Beylagan, where a journalist working with AFP saw residents picking through the rubble of destroyed homes.

"I was baking bread when I heard explosions, I opened the door and saw that bombs were falling right into the yard," said one woman, showing journalists the blown-out windows and partially collapsed roof of her home.

"I came to ask God for peace, for our country and our soldiers," Aytsemik Melikyan told AFP outside the Saint Sarkis Church.

Russia, the United States and France -- who co-chair a mediation group that has failed to find a political resolution to the conflict -- have called for an immediate halt to the fighting.

Russian Foreign Minister Sergei Lavrov expressed concern over "the increase of casualties" among civilians in a call with his Armenian counterpart Sunday.

Karabakh's declaration of independence from Azerbaijan during the collapse of the Soviet Union sparked a war in the early 1990s that claimed 30,000 lives.

Talks to resolve the conflict have made little progress since a 1994 ceasefire agreement.