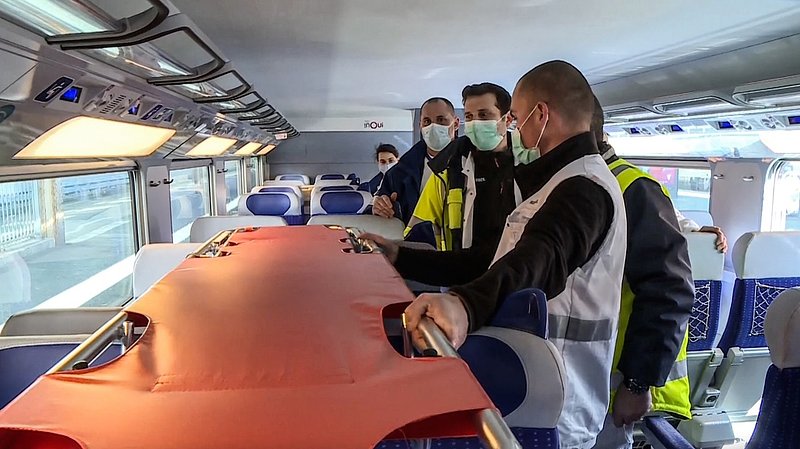 As the situation continues to worsen in the most-affected region in France, transfer and aid measures have been put in place with neighbouring regions.

As of 2pm on 25 March, 3,068 patients were confirmed to be hospitalised, including 651 patients in intensive care - 56 more than the previous day.

The Regional Health Agency (ARS) confirmed 774 people had been discharged from hospital after recovering from the virus.

Since the start of the epidemic, 506 people have died due to coronavirus in the region, taking into account patients who tested positive for Covid-19, as well as people who were not tested, but whose death was due to virus complications.

ARS said this showed the situation was getting worse, and reiterated the importance of staying at home and respecting the guidelines.

A specialised medical TGV train has been in operation since Wednesday, transporting the first batch of patients from Strasbourg to the Loire on Thursday morning.

The medical train will allow the evacuation of 20 patients currently in intensive care in the Grand Est region, taking them to the Angers, Nantes, Le Mans and La Roche / Yon teaching hospitals.
Aboard the specialist train provided by the SNCF, four patients will be installed in each carriage, each with a medical team made up of an anaesthesiologist-resuscitator, one intern, one nurse anaesthetist and three nurses.

The medical teams operating the train come from the University Hospital Centres of Nantes, Angers and APHP establishments in Ile-de-France,  coordinated by Paris emergency services.

This first operation is part of the overall strategy to relieve the areas most affected by the epidemic, and will be linked with operations carried out by the Armed Forces.

Transfers of patients from the Grand Est have been completed, taking patients to Switzerland, Germany (Saarland, Rhineland Palatinate, Baden-Württemberg) and to Luxembourg.

In total, around forty intensive care beds have been made available by neighbouring countries.