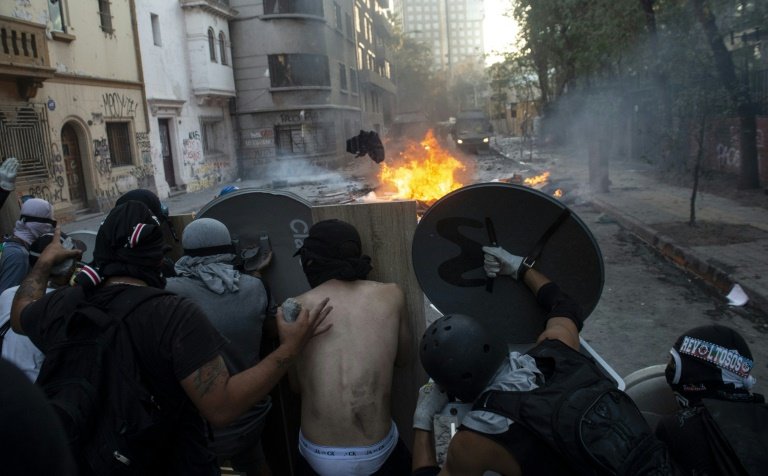 Chile's capital has been rocked by its worst anti-government violence in weeks after stone-throwing protesters clashed with police in running battles across the city.

Demonstrators returned to Santiago's Plaza Italia on Monday to rally against economic inequality and condemn the government of right-wing billionaire president Sebastian Pinera.

By nightfall a group of hooded men clashed with riot officers in nearby streets, hurling rocks and firing projectiles with slingshots.

Elsewhere in the city protesters built barricades and set them alight before being dispersed by police using tear gas and water cannons.

More than 30 people have died since protests began last October with the announcement of a modest hike in metro transport fares.

The demonstrations have mushroomed to encompass wider discontent over social and economic woes.

Around 23 police officers were injured last week during clashes with rioters at the Vina del Mar music festival west of the capital.

Authorities fear a new round of rallies this month with the end of the summer holiday season.

Protest organizers have circulated a calendar of demonstrations, including International Women's Day on March 8, and the anniversary of the deaths of two brothers murdered by the former Pinochet dictatorship on March 29.