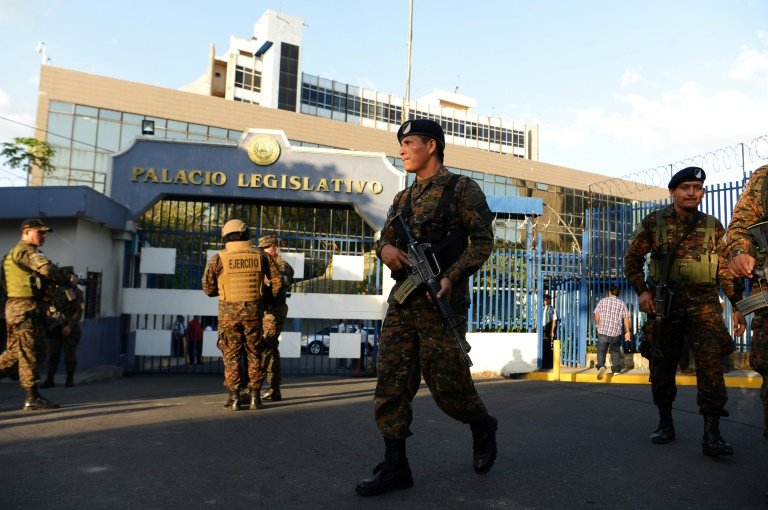 The head of El Salvador's parliament on Monday accused President Nayib Bukele of an "attempted coup" after soldiers entered the building while Bukele demanded lawmakers approve a military loan.

Bukele had "attempted a coup d'etat" against the legislative assembly on Sunday, said Mario Ponce, of the conservative National Coalition Party (PCN), after meeting with fellow political party representatives.

"We cannot respond to the executive branch with a gun to our head," he said, calling on the government to engage in dialogue.

Bukele called an extraordinary weekend session of parliament to ask it to approve a $109 million loan to equip the military and police to fight against violent gangs.

The loan has pitted the executive against lawmakers in a country with one of the world's highest murder rates.

Before Bukele's entry on Sunday, armed police and soldiers with rifles and wearing body armor entered the chamber and stood guard -- a move not seen since the end of the country's civil war in 1992.

"If these good-for-nothings (lawmakers) do not approve the Territorial Control Plan this week we will call them to hold a session again next Sunday," Bukele said in a speech to supporters outside the parliament.

Bukele, who took office last June, has pledged to tackle gang violence and intends using the loan to better equip the military and police, but lawmakers refused to sit for an extra session over the weekend to debate the issue.

In response to the troops, the Speaker of Parliament indefinitely suspended Monday's plenary session, whose only agenda item was the loan requested by Bukele.

The president harshly criticized the postponement on Twitter, accusing the legislative members of "lying... as always."

"It is not with whims or authoritarianism that things will move forward," responded opposition MP Jorge Shafick Handal, of the major political party Farabundo Marti National Liberation Front (FMLN).

The presence of troops prompted international cries of concern.

The European Union on Sunday expressed "great concern" over the "confrontation" between Salvadoran institutions.

Amnesty International said the deployment of armed police and military personnel in front of the legislature brought back memories of the "darkest moments" in El Salvador's history.

El Salvador is one of the world's most dangerous nations -- excluding those enduring an armed conflict -- with an average of 35.6 homicides per 100,000 people last year.

There was no police or military presence visible around the legislative building on Monday.

"It was frightening to see so many soldiers and policemen in Parliament," Marcos Salguero, a restaurant owner in the center of the capital, told AFP."