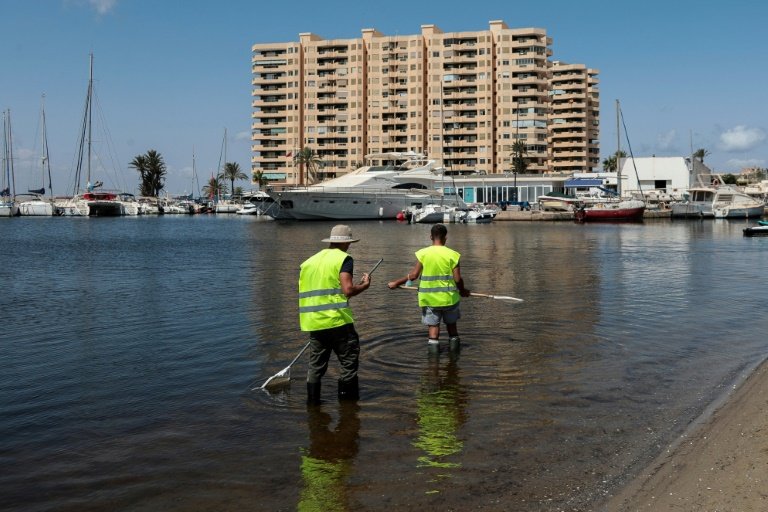 Municipal workers clean the shores of the Mar Menor lagoon in Spain, which was granted personhood status to give its threatened ecosystem better protection / © AFP/File

Spain granted personhood status Wednesday to a large saltwater lagoon to give its threatened ecosystem better protection, the first time such a measure has been taken in Europe.

The initiative to grant the status to the Mar Menor -- one of Europe's largest saltwater lagoons -- was debated in parliament after campaigners collected over 500,000 signatures backing it.

It now becomes law after Spain's Senate, the upper house of parliament, voted in favour of the proposal, with only far-right party Vox opposing it.

This will allow the rights of the lagoon located in southeastern Spain to be defended in court, as though it were a person or business.

"The Mar Menor becomes the first European ecosystem with its own rights after the Senate approved the bill to give it a legal identity," the president of the Senate, Ander Gil, tweeted after the vote.

The lagoon will now be legally represented by a group of caretakers made up of local officials, scientists who work in the area and local residents.

Ecologists have for years warned that the Mar Menor is slowly dying due to the runoff of fertilisers from nearby farms.

In August 2021, millions of dead fish and crustaceans began washing up on the shores of the lagoon, which experts blamed on agricultural pollution.

They argue that sealife died due to a lack of oxygen caused by hundreds of tonnes of fertiliser nitrates leaking into the waters causing a phenomenon known as eutrophication which collapses aquatic ecosystems.

Ecologists in October 2021 submitted a formal complaint to the EU over what they called Spain's "continued failure" to protect the Mar Menor, which they warned was on the brink of "ecological collapse".

The following month the Spanish government unveiled a 382-million-euro ($377 million) plan to regenerate the lagoon.

It outlines several environmental regeneration projects to support biodiversity in and around the lagoon, including the creation of a 1.5-kilometre (one mile) buffer zone along the Mar Menor's shores.