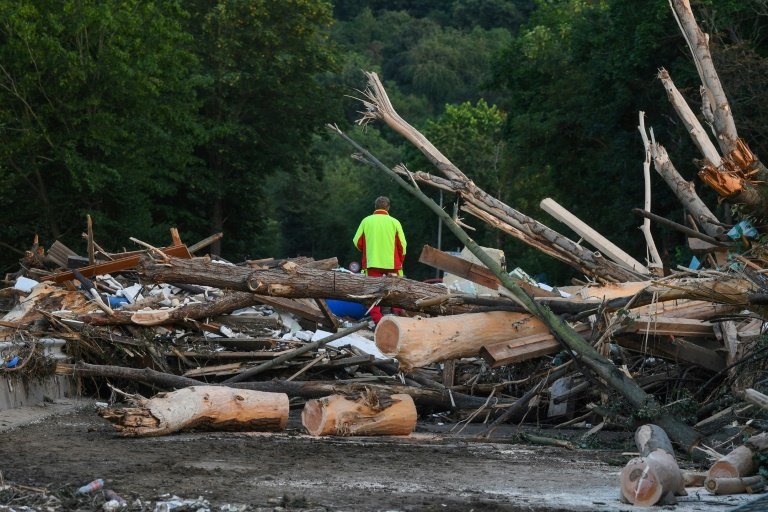 Germany has experienced its worst flooding in living memory / © AFP

Chancellor Angela Merkel is to visit flood-ravaged areas in Germany on Sunday to survey the damage and meet survivors, after days of extreme rainfall in western Europe left at least 183 people dead and dozens missing.

Merkel is scheduled to travel to the village of Schuld in Rhineland-Palatinate state, one of the two hardest-hit regions in western Germany, where the swollen Ahr river swept away houses and left debris piled high in the streets.

At least 156 people have died since Wednesday in Germany's worst flooding in living memory, police said in an update Sunday morning.

At least 27 people have also lost their lives in neighbouring Belgium.

Rescue crews in both countries were sifting through rubble to find victims, often in dangerous conditions.

The historic downpours also battered Switzerland, Luxembourg and the Netherlands. 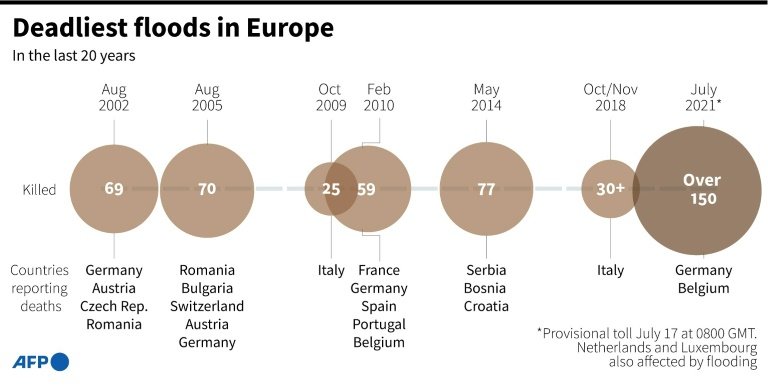 One person died in Berchtesgadener Land, a spokeswoman for the Bavarian district told AFP.

In Austria, emergency workers in the Salzburg and Tyrol regions were on high alert for flooding. The historic town centre of Hallein, near the German frontier, was under water.

Merkel has called the floods a "tragedy" and pledged support from the federal government for Germany's stricken municipalities.

Speaking alongside US President Joe Biden at the White House on Thursday, Merkel said her "heart goes out to all of those who in this catastrophe lost their loved ones".

The government has said it is working to set up a special aid fund, with the cost of damage expected to reach several billion euros.

The disaster has increasingly taken on political overtones in Germany, which heads to the polls on September 26 for a general election that will mark the end of Merkel's 16 years in power. 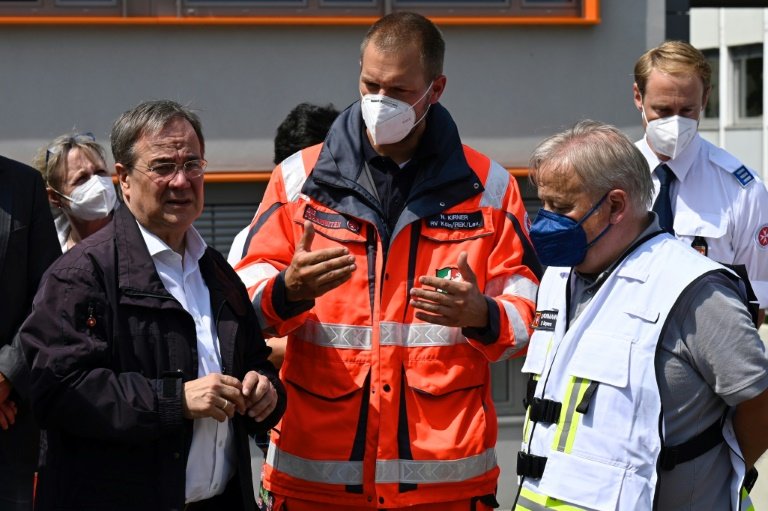 Armin Laschet, the premier of hard-hit North-Rhine Westphalia (NRW) state and frontrunner in the race for the chancellery, said efforts to tackle global warming should be "speeded up".

But Laschet, who heads Merkel's CDU party currently leading in opinion polls, scored an own goal Saturday when he was filmed laughing in the devastated town of Erftstadt in NRW, where a landslide was triggered by the floods.

In the footage, Laschet could be seen chatting and joking in the background as President Frank-Walter Steinmeier gave a statement expressing his sympathies to grieving families.

Laschet later apologised on Twitter for the "inappropriate" moment.

The scale of the flood impact was gradually becoming clear in Germany, with damaged buildings being assessed, some of which will have to be demolished, and efforts under way to restore gas, electricity and telephone services. 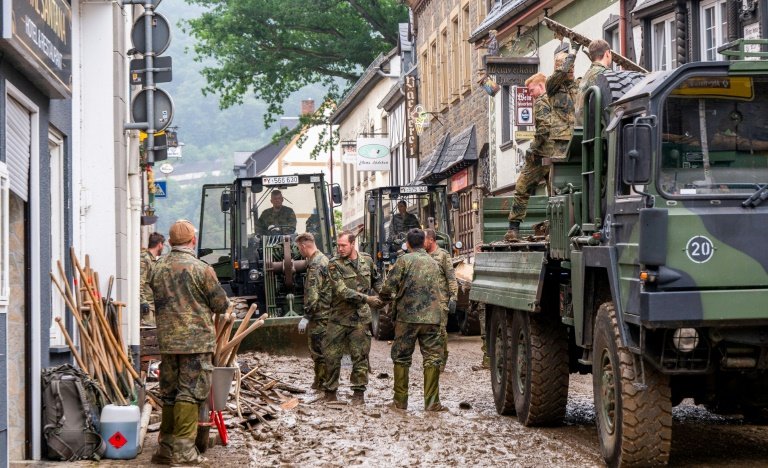 In some areas, soldiers used armoured vehicles to clear the debris clogging streets.

In NRW, divers were sent in to search submerged homes and vehicles.

Local authorities in NRW and Rhineland-Palatinate said dozens of people remain unaccounted for across both states.

They have stressed, however, that disruption to communication networks made a precise assessment difficult, and the real number of missing could be lower.

"I've lived here my whole life, I was born here, and I've never seen anything like it," said Gregor Degen, a baker in the devastated spa town of Bad Neuenahr-Ahrweiler, near Schuld.

Across the border in Belgium, the death toll jumped to 27 with many people still missing.

"Europe is with you," von der Leyen tweeted afterwards. "We are with you in mourning and we will be with you in rebuilding."

Belgium has declared Tuesday a day of official mourning.