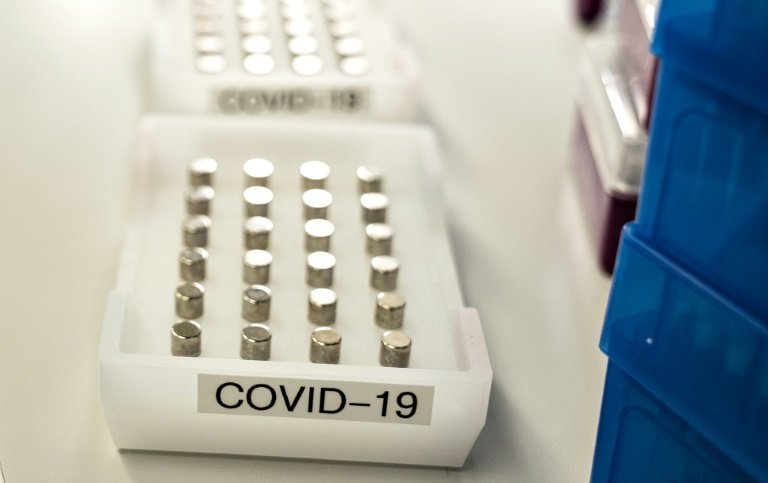 Researchers in Australia said the tool was effective against viral transmissions in lab tests, adding that they hope soon to begin animal trials on the method / © Ritzau Scanpix/AFP/File

Scientists have used CRISPR gene-editing technology to successfully block the transmission of the SARS-CoV-2 virus in infected human cells, according to research released Tuesday that could pave the way for Covid-19 treatments.

Writing in the journal Nature Communications, researchers in Australia said the tool was effective against viral transmissions in lab tests, adding that they hoped to begin animal trials soon.

CRISPR, which allows scientists to alter DNA sequences and modify gene function, has already shown promise in eliminating the genetic coding that drives the development of children's cancer.

The team in Tuesday's study used an enzyme, CRISPR-Cas13b, that binds to relevant RNA sequences on the novel coronavirus and degrades the genome it needs to replicate inside human cells.

Lead author Sharon Lewin from Australia's Peter Doherty Institute for Infection and Immunity told AFP that the team had designed the CRISPR tool to recognise SARS-CoV-2, the virus responsibly for Covid-19.

"Once the virus is recognised, the CRISPR enzyme is activated and chops up the virus," she said.

"We targeted several parts of the virus -– parts that are very stable and don't change and parts that are highly changeable -- and all worked very well in chopping up the virus."

The technique also succeeded in stopping viral replication in samples of so-called "variants of concern" such as Alpha.

Although there are several Covid-19 vaccines already on the market, available treatment options are still relatively scarce and only partially effective.

Lewin said that using the CRISPR technique in widely available medicine was probably "years, not months" away.

But she insisted that the tool could still prove useful in tackling Covid-19.

"We still need better treatments for people who are hospitalised for Covid," said Lewin.

"Our current choices here are limited and at best they reduce the risk of death by 30 percent."

Lewin said the ideal treatment would be a simple antiviral, taken orally, that patients are given as soon as they test positive for Covid-19.

This would prevent them getting seriously ill, and in turn alleviate pressure on hospitals and care systems.

"This approach -- test and treat -- would only be feasible if we have a cheap, oral and non-toxic antiviral. That's what we hope to achieve one day with this gene scissors approach," said Lewin.

Co-author Mohamed Fareh from the Peter MacCallum Cancer Centre said that another benefit of the research was its potential to be applied to other viral diseases.

"Unlike conventional anti-viral drugs, the power of this tool lies in its design-flexibility and adaptability, which make it a suitable drug against a multitude of pathogenic viruses including influenza, Ebola, and possibly HIV," he said.