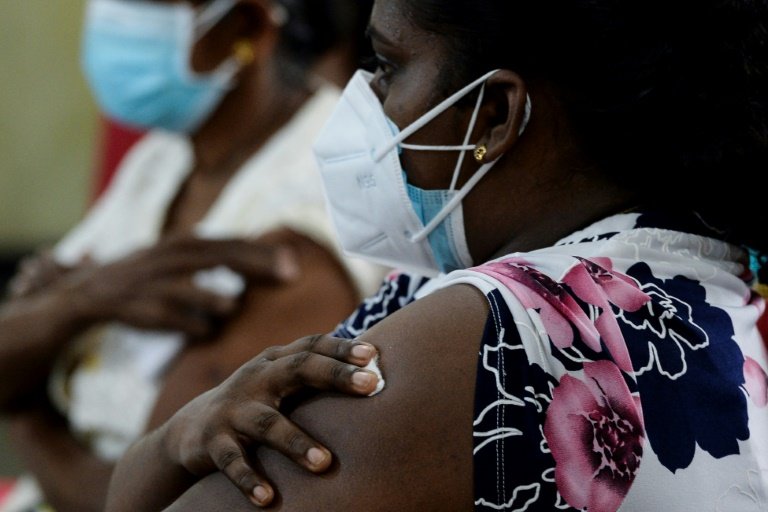 Bangladesh, Nepal and Sri Lanka have slowed their vaccination campaigns as they scour international markets for new stocks / © AFP

Bangladesh, Nepal and Sri Lanka are close to running out of coronavirus vaccines, authorities said Friday, and are hoping China and Russia will bolster South Asia's efforts to tackle a devastating pandemic wave.

Covid-19 cases and deaths have hit record levels across India and its neighbours in recent weeks and all are counting on vaccine campaigns to head off the next surge.

But India's move last month to ban vaccine exports because of growing domestic shortages has badly hit other countries, and the three South Asian nations have slowed their vaccination campaigns as they scour international markets for new stocks.

Bangladesh has about one million doses of AstraZeneca's Covishield and Chinese Sinopharm jabs, and was expecting 100,000 Pfizer shots, but all will be gone in "days", government health chief A.B.M. Khorshed Alam said.

The country of 168 million people has reported some 800,000 infections and 12,200 deaths. As in other South Asian nations, experts say the true toll is much higher.

Bangladesh had a deal to buy 30 million Covishield doses from the Serum Institute of India, the world's biggest vaccine maker. Only seven million had been delivered when India halted exports last month.

It has since contacted China and Russia to get their vaccines and Western countries who may have surplus AstraZeneca shots.

One deal with China for an unspecified number of Sinopharm shots was approved on Wednesday, officials said.

But China's Ambassador Li Jiming said Bangladesh should not expect commercial supplies before December. He told the bdnews24.com portal that "the queue is too long".

Nepal has an estimated 1.5 million people waiting for a second shot of Covishield, with supplies also held up by the Indian export ban. It is now getting through dwindling numbers of Sinopharm jabs given by China.

Sri Lanka, with a population of 21 million, has about 115,000 vaccine doses left and has slowed its inoculations to 15,000 a day as it also negotiates with other countries, officials said.

Sri Lanka is now going through 600,000 gifted Sinopharm doses and is hoping to receive 26 million shots from Russia and China.

The International Federation of Red Cross and Red Crescent Societies said governments and pharmaceutical companies had to help struggling Asian nations where hospitals are overflowing with sufferers.

"Tens of thousands of lives are being lost each week and vaccines must be available so that we can prevent further terrible tolls in the weeks and months ahead," said Alexander Matheou, Asia Pacific head of the IFRC.

Even India, one of the world's major pharmaceutical and vaccine producers, is looking for foreign supplies.

India has already started importing Sputnik V from Russia as its ambitious target of inoculating 300 million people by the end of July is slowed by shortages.

About 150 million people have had a first dose and 40 million the second jab. But daily injections have fallen from 3.6 million a day in April to 1.4 million on Thursday.

Foreign Minister Subrahmanyam Jaishankar is to visit the United States next week and media reports said he would meet executives from US vaccine makers.