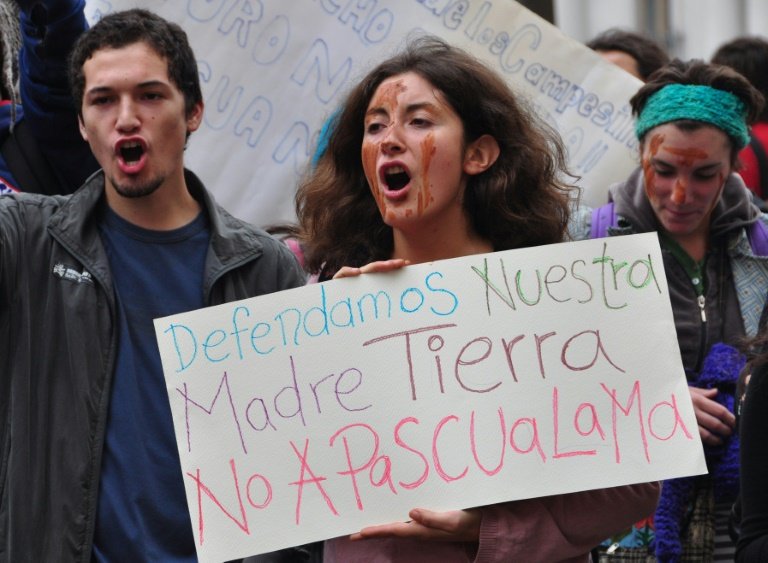 The multi-billion dollar Pascua Lama project, which straddles Chile's border with Argentina at an altitude of 4,000 meters (13,100 feet), has been the subject of protests / © AFP

The court dismissed a legal challenge from the company and confirmed a 2018 environmental authority ruling, ordering the "total and definitive closure" of the mine project.

It also imposed a $9 million fine on the Canadian miner.

"The magnitude of the danger to people's health makes it necessary to close the Pascua Lama mining project, as other alternatives for safe operation for the environment and population health do not appear to be viable," the court said.

The multi-billion dollar Pascua Lama project, which straddles Chile's border with Argentina at an altitude of 4,000 meters (13,100 feet), was launched in 2009.

But local groups began a legal battle to halt its construction, citing concerns over the threat of damage to waterways from the massive open pit mining project, one of the largest in the world.

Barrick Gold, the world's second-largest gold producer, planned to spend up to $8.5 billion on the mine, and initially planned to start production there in 2014.

However, construction was suspended in April 2013 when a Chilean court accepted a complaint filed by indigenous groups.

Greenpeace said the ruling was "a very important victory for the local communities that for years have denounced and taken legal action against the serious effects that mining has had on their lands."

The environmental group added that the project was an example of mining's impact on Chile's glaciers, and said it was important the government move forward with legislation that protects glaciers from similar projects.

Chilean authorities said Pascau Lama had violated 33 environmental regulations and damaged native flora and fauna. Of particular concern was the discharge of acidic water into the Estrecho river that supplied the local indigenous Diaguita community.