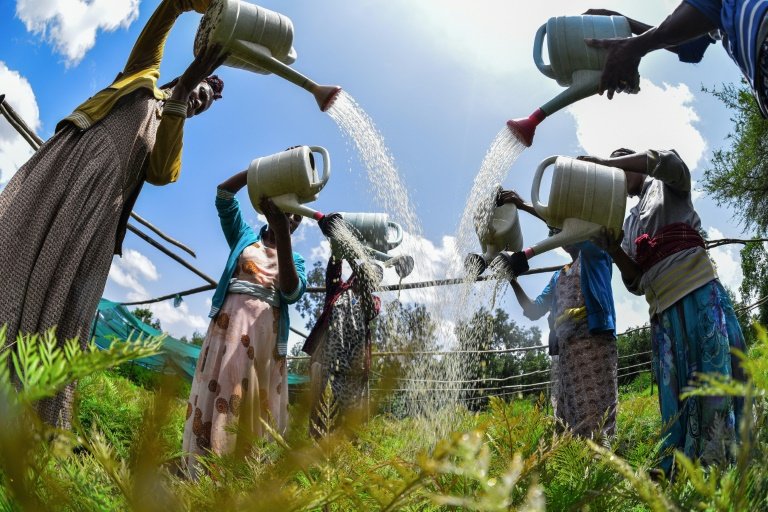 Braving a heavy downpour, hundreds of farmers spent a full day planting 20,000 acacia seedlings on a barren hillside outside the town of Buee in southern Ethiopia last year.

They were responding to a call last July from Prime Minister Abiy Ahmed, who wanted his countrymen to plant 200 million trees in a single day, shattering the world record.

But while the farmers had "great expectations", nearly a year later -- as Ethiopia celebrated World Environment Day on Friday -- they said the results in Buee were a disappointment.

Rainfall immediately washed away more than one-third of the seedlings, and those that remain have struggled to grow out of hastily-dug holes filled with poor soil, said Ewnatu Kornen, a local environment official.

The farmers' ordeal points to the potential pitfalls of mass-planting drives, which are central to Abiy's "Green Legacy" campaign to promote ecotourism and transform Ethiopia into an environmentally-friendly economy.

Some 353 million seedlings -- 153 million more than the initial goal -- went into the ground nationwide during last year's daylong mass-planting, according to official figures.

That's a mere fraction of the four billion trees reportedly planted during the entire 2019 rainy season, which runs from June to September in Ethiopia.

This year's mass-planting has yet to be scheduled, but Abiy on Friday officially launched a push for five billion new trees this rainy season. 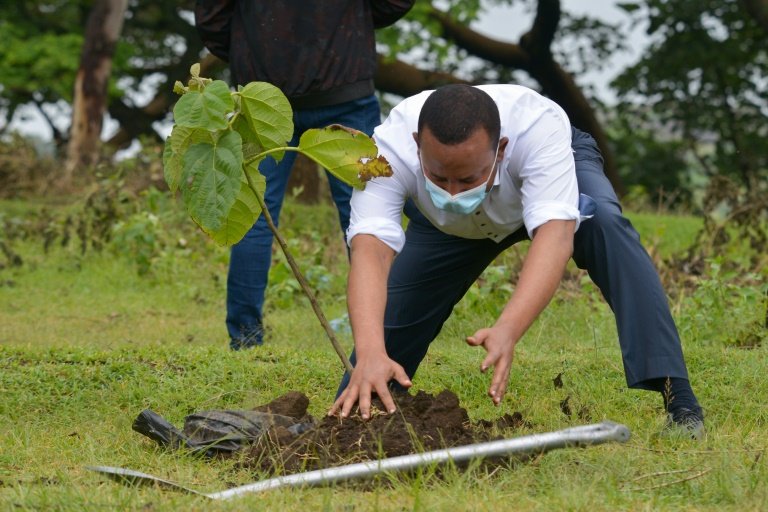 At a ceremony in the southern city of Hawassa, he told officials he wanted the country to plant 20 billion trees over four years.

Outside Ethiopia, debate has swirled over the credibility of these eye-popping figures.

Yet local experts say there are more important questions: Has the planting been properly organised, and has there been enough follow-up to keep the trees alive?

"It's not really about the numbers," said Negash Teklu, head of a group of NGOs known as the Population Health & Environment Ethiopia Consortium.

"It's about the effectiveness of the tree-planting scheme."

Last month Abiy announced that 84 percent of the four billion trees planted in 2019 had survived, crediting "extensive care-taking work" throughout the year.

No known independent studies have been conducted.

But Negash, who stressed that he broadly supports Abiy's tree-planting agenda, suspects the survival rate is "highly exaggerated".

"They were not considering how the community can be owners of the process. It was more random -- 'Oh, we will plant,'" Negash said of last year's effort.

This was apparent in the capital, Addis Ababa, where some residents planted ornamental trees in wild forests outside the city centre, while others placed large trees in the medians of busy streets -- where they had no chance of survival. 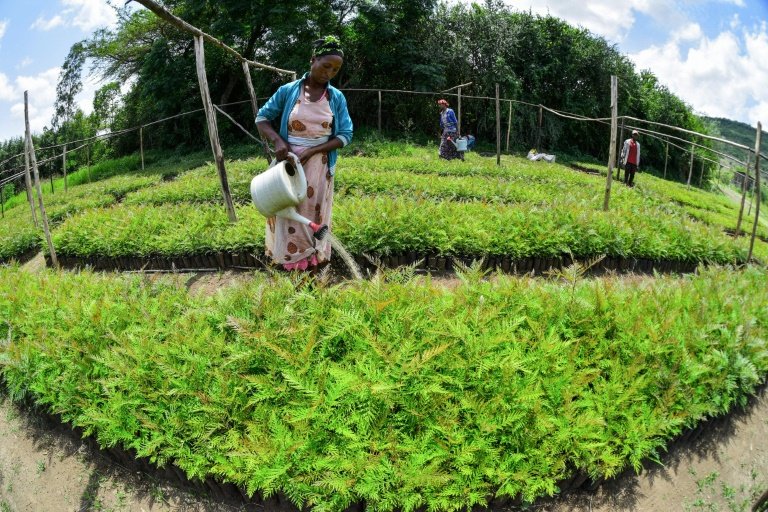 A thriving nursery in Buee in southern Ethiopia / © AFP

Going forward, officials must do a better job on seedling placement as well as explaining to citizens how afforestation will improve their lives, Negash said.

"It shouldn't be a one-day campaign that happens every year. It should be an approach that really engages every citizen wherever they are" year-round, he added.

Belaynesh Zewdie, a forestry expert with the UN Development Programme in Buee, has seen firsthand how projects that lack community buy-in can go awry.

In the late 1980s, under the communist Derg regime, she was involved in a scheme to plant one million acacia trees in the northern Amhara region.

But the scheme was top-down and "forced", she recalls, and once the regime fell in 1991 angry residents cleared the trees to plough the land.

In recent years, Belaynesh has worked on a plantation and rehabilitation project in Buee that tries to deliver immediate and concrete benefits to those living nearby. 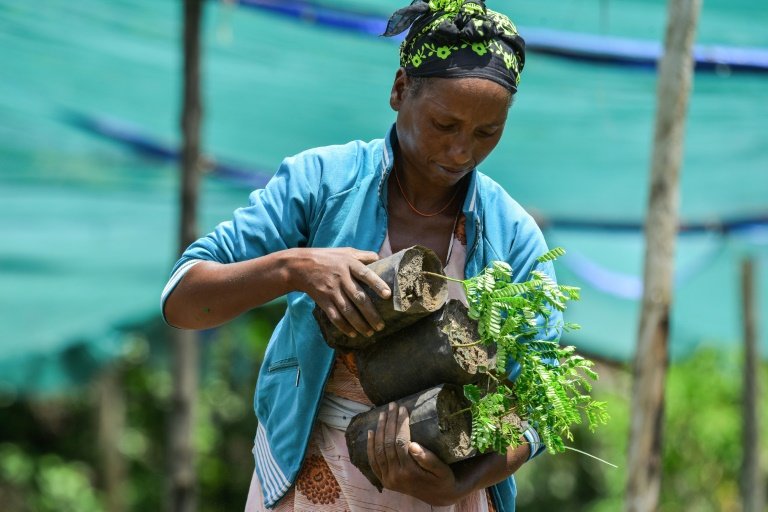 Part of the project's protected area lies in a watershed, so she has constructed ponds that offer herders an alternative water source for their cattle.

She has also given residents eucalyptus seedlings to plant near their homes so they're not tempted to cut down the project's acacia and silky oak trees.

The project's nursery, meanwhile, employs 17 local women who earn roughly $50 per month -- a tidy sum for the region.

The result -- hectares upon hectares of green, thriving trees -- illustrates what can be achieved "if you discuss with the community, if the community accepts you," Belaynesh said.

"I myself, I am impressed still every time I come here and I see it," she said. "It's unbelievable."

Despite imposing a state of emergency in April because of the coronavirus, Abiy remains determined to meet this year's goal of planting five billion trees.

As the country looks ahead to a yet-to-be-scheduled general election, he hopes the initiative can help bridge ethnic and political divides. 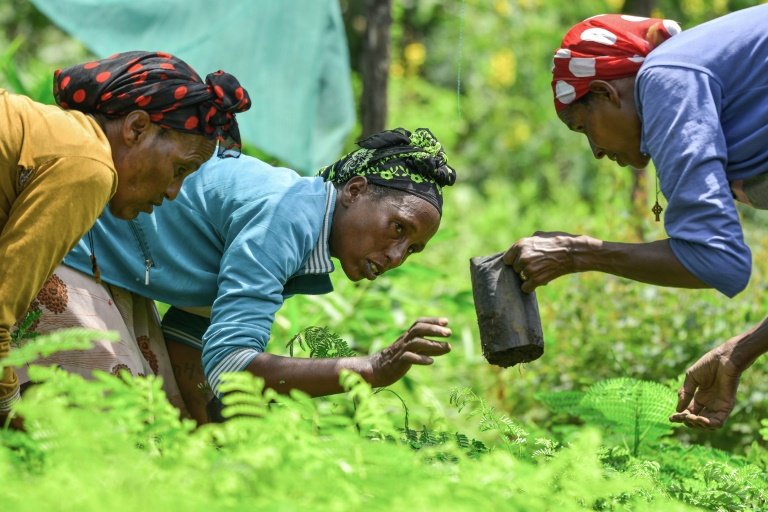 "I call on politicians to plant trees by suspending your political views for a while and engaging your followers," he said at Friday's ceremony.

He then removed his suit jacket and planted four cordia abyssinica trees in pre-dug holes, patting the soil with his hands.

As this year's planting unfolds across the country, officials are keen to improve on last year's effort so more trees stay standing, said Sileshi Degefa, director of the Gullele Botanical Garden in Addis Ababa.

"This year we've got enough lessons from the previous one, so I hope we will plant the right species in the right place," he said.

He added, though, that "with such big programmes, we don't expect perfection".