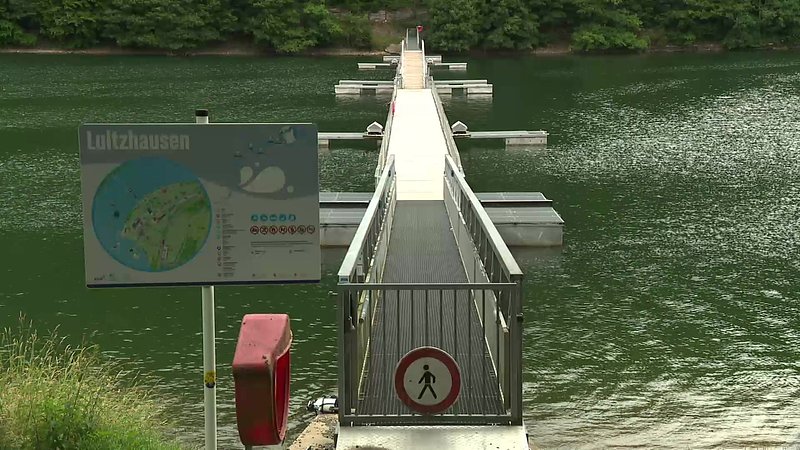 After the chaotic scenes from last weekend, authorities are currently working on repairing all the damages that resulted from acts of vandalism and are trying to establish ways of managing large crowds at the lake more efficiently.

Repairs on the pedestrian bridge between Lultzhausen and Liefrange are expected to last into next week. "The balustrades are not able to support a large number of people jumping from it at the same time, so several things broke. Parts of the main handrail were forced out of their anchorage, four other sections were damaged, and four safety buoys were stolen", explained Ralph Di Marco from the Bridges and Roads Authority.

Marco Schank, Mayor of Esch-sur-Sûre, also drew attention to the fact that people endanger themselves with their behaviour: "In recent years, it seems to have become popular to cut parts of the safety fences and swim into the protected zone."

Continued acts of vandalism and theft force local authorities to patrol the area. According to Mayor Schank, 50 employees are tasked with monitoring the situation: "In the year 2020, we spent €100,000 to maintain the beaches. About a third of those costs were related to waste management. ... Although the government reimburses about a third of costs, that is unfortunately no longer enough."

Local ranger Tom Schmit provided insight into the ways in which people carelessly harm nature in the area: "People try setting up fires and break off healthy branches without realising that they will not even burn. They destroy nature for nothing."

A return of the reservation system, which was put in place for a first time at the beginning of the pandemic, is not expected to solve any of the problems. Local authorities believe that people will always find ways to access the lake, even without a reservation.

A special 'Barrier Lake Commission', made up of representatives from the Nature Park, the police, the Grand Ducal Fire and Rescue Corps (CGDIS), and the respective municipalities, is scheduled to convene on 6 July and propose new measures to get the situation back under control.