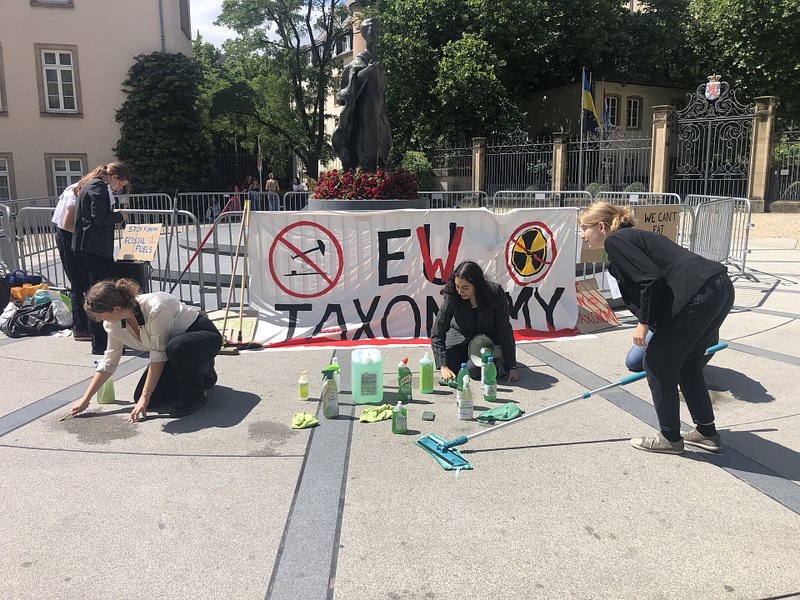 On Saturday, the Youth for Climate collective staged a protest at Place Clairefontaine in Luxembourg City to denounce a plan to classify fossil fuels as "green" energy.

On 14 June, two committees of the European Parliament voted against Brussels' plan to include gas and nuclear power among the EU's "green" energies, paving the way for a vote by all MEPs to block the controversial text.

The European Commission had presented in December a draft green label ("taxonomy") for nuclear and gas power plants, with the intention of making it easier to finance infrastructure that aids in the battle against climate change – much to the dismay of several member states and environmental NGOs.

On Saturday in Luxembourg City, Youth for Climate staged a protest on Place Clairefontaine to denounce "greenwashing" and "effective lobbying, supported by an alliance of pro-gas and pro-nuclear countries." According to the climate activists, "it is obvious that considering these energies as 'green', even in a transitory way in the case of gas, cannot lead to an efficient decarbonisation of financial flows." On the contrary, encouraging investments in gas energy, considered "the most important source of energy emissions at EU level," will "only impede a transition that could achieve the EU's and the Paris Agreement's 2030 climate objectives".

In response, Youth for Climate activists dressed up "to embody officials refusing to acknowledge the current nature of the Taxonomy: that of an explicit greenwashing tool".

The text will be considered definitively adopted next month, unless the European Parliament (by an absolute majority, i.e., 353 MEPs) or the Member States (by a qualified majority, i.e., at least 15 States representing 65% of the EU population) veto it by 11 July, in which case Brussels will have to amend or withdraw its proposal.

In the European Council, nearly ten states (Germany, Spain, Sweden, Austria, Denmark, Luxembourg, Portugal, Malta, among others) are opposed to the inclusion of nuclear power, while some others (the Netherlands, among others) refuse to include gas.