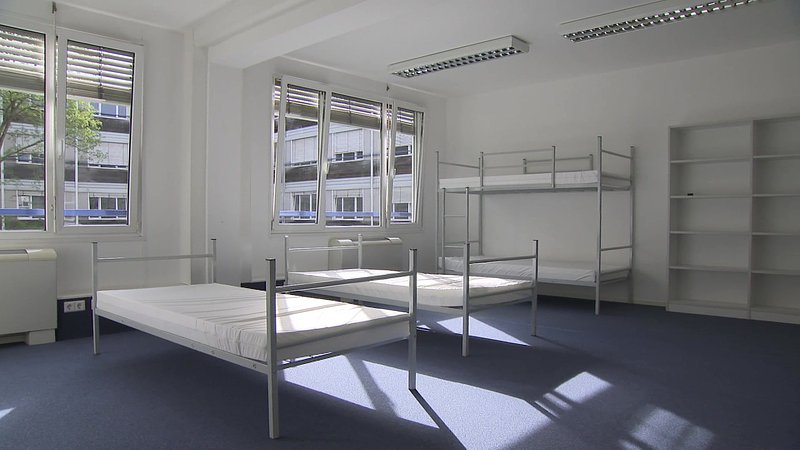 A former European Court of Justice building, "Building T", has been repurposed to accommodate incoming refugees.

The new accommodation was repurposed in order to replace the LuxExpo centre and the subsequent tent structure which followed it last month.

On Thursday evening, authorities presented a partial opening of the new building, allowing residents in the area to tour the available facilities and ask questions.

Over the next few days, the first Ukrainian refugees are expected to move into the new accommodation in Kirchberg. Around 150 beds are now ready for use in the building on Boulevard Konrad Adenauer. A further 1,100 are expected to be made available over three floors when the renovation work concludes.

Minister of Foreign Affairs Jean Asselborn presided over the proceedings on Thursday night, mere hours after returning from a state visit to Portugal. He said the interest and reactions to the new accommodation had been positive, and said this had mostly been the case for new structures since 2015, which have hosted refugees from Syria, Iraq and Eritrea, to name a few.

Asselborn also spoke of the ongoing situation in Ukraine on Thursday, confirming that around 3,000 people fleeing the war had received temporary protection in Luxembourg to date. This is the status required to obtain permission to live in one of the 50 rooms available in the new building as of this week, he added. Residents will have to share bathrooms and there are no cooking facilities; however, food is regularly delivered to the structure.

The minister also explained the two processes in place, with one for regular asylum seekers and one specifically for refugees from Ukraine. There has, to date, never been such a large flux of refugees in Luxembourg, he said, with numbers reaching around 5,000 as of Thursday. Authorities are said to be scrambling to ensure the refugees do not have to live in tents.

Although the session did not yield many questions from onlookers, the audience showed great interest. Asselborn arrived some 45 minutes late after his return flight from Portugal was delayed.

The National Reception Office (ONA) structures are currently housing some 1,500 Ukrainian refugees across 19 buildings. The new Kirchberg accommodation will seek to bring more refugees together, said Asselborn, however, he added he hoped the conflict would end before the remaining 1,200 beds are occupied.