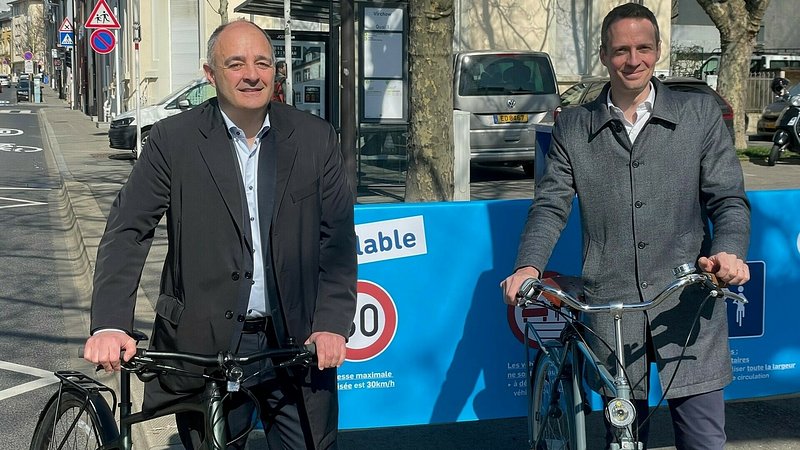 Luxembourg City has introduced seven new "bike roads", where cyclists can use the full width of the road and drivers cannot overtake.

With the return of warmer weather, many residents will dust off their bikes. Luxembourg City wanted to launch the cycling season by introducing seven so-called "bike roads".

In the land of perpetual road chaos, cycling can be a real alternative to avoid traffic jams. And with sky-high energy prices, there are also significant savings to be made. To make cycling more attractive, Luxembourg City has inaugurated seven so-called "bike roads". Patrick Goldschmidt, alderman for mobility, explains the concept using the example of rue des Trévires in Bonnevoie: "Motorised vehicles cannot overtake bikes. Additionally, there is a 30kph speed limit."

This also serves as a traffic calming measure, without completely excluding other forms of mobility. But this is not the right approach, says Provelo.lu's Monique Goldschmit. Making cyclists a target in order to calm traffic is not the way to go.

The safety of cyclists is an ongoing topic of contention between the organisation and the City. Patrick Goldschmidt is optimistic, however: "It is a shared space where the cyclist has priority. We assume the cyclist is safe if drivers respect the Highway Code. Of course, this requires awareness. We hope the police will support us in this."

Nice in theory, but a different situation in practice. We met Monique Goldschmit at the intersection of rue du Fossé and rue Notre Dame. In theory, this can only be used by cyclists and residents. But there is a constant flow of cars with both Luxembourg and foreign number plates. ProVelo.lu wants to see more engagement from the city.

There is no doubt that there is much work to be done on soft mobility in Luxembourg. In 2017, only 2% of trips were done by bike. But according to a TNS-Ilres study, 90% of respondents would cycle more if there were more separated bike lanes. Nearly as many people wished for more mutual respect on our roads.