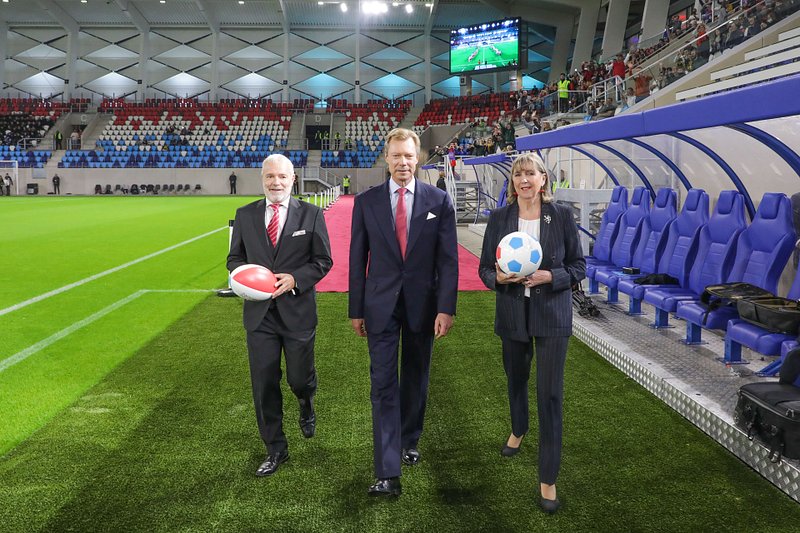 Grand Duke Henri was in attendance on Saturday for the official inauguration of the long awaited new stadium in Luxembourg City.

Baptised the "Stade de Luxembourg" in late July 2020, the new football and rugby stadium would not open to the public for another year, despite mayor Lydie Polfer describing the process as almost completed at that time.

Saturday 25 September saw the stadium's official inauguration, presided over by Luxembourg's Grand Duke, against a backdrop of lights, lasers, and seats decorated in the national colours.

Just 250 lucky guests were permitted to attend the event, after entry tickets organised by the City of Luxembourg were snapped up on the day of release.

Following the Grand Duke's reception by Fernand Etgen, President of the Chamber of Deputies, speeches were given by Lydie Polfer and Minister of Sport Dan Kersch, before several young athletes were presented with a football and rugby ball. The event also included musical and sporting activities, as well as dance performances.

The festivities concluded with the cutting of a cake in the image of the new stadium. Grand Duke Henri was also presented with a gift box, including a jersey for his grandson (and future hereditary Grand Duke) Prince Charles, bearing the inscription "Charles I", as a souvenir of the event.

First results at the new stadium

Although the official inauguration has only just taken place, the stadium has already hosted several matches, including a positive first test match in mid-July organised by the Luxembourg Football Federation, which accommodated 1,158 spectators.