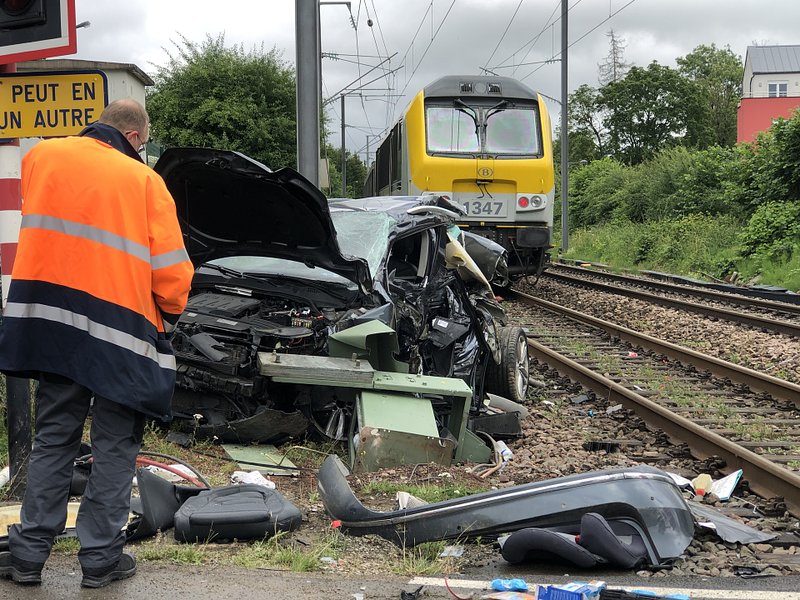 The spectacular accident that occurred in Bertrange on Monday raises questions. What is the right thing to do if you find yourself trapped on the tracks while a train is heading your way? The Luxembourg National Railway Company (CFL) has a straightforward answer.

Our colleagues at RTL 5 Minutes got in touch with a CFL spokeswoman, who stressed straight away that the right thing to do is "always respect traffic regulations and stop at red lights". In other words, you should not cross a level crossing when a train is signalled to arrive.

This is what traffic regulations stipulate, but in the case that something goes horribly wrong, and a motorist finds themselves in an awkward position despite everything, what should they do?

Break through the barriers

Once again, the spokeswoman has a very unambiguous answer, explaining that "if you have no choice, you have to break down the barriers". In fact, the barriers at level crossings were even designed for this specific purpose and break easily.

While a driver's car might end up with a few bumps, that is "nothing compared to a collision", according to the CFL spokeswoman. The images of Monday's accident and the condition of the vehicle afterwards clearly show the effects of a collision between a car and a train.

The reflex of the driver - filmed by a local resident - who got out of the car just a few seconds before the impact, certainly saved her life.

However, breaking down the barrier would have prevented a great deal of material damage and traffic disruption (the Bertrange crossing will remain closed for two days), not to mention the injuries that could have been caused to the train driver and passengers.

Although collisions at level crossings are still rare in Luxembourg, these locations have a tendency to attract accidents. Three months before the Bertrange accident, a lorry stuck on the tracks at the Kautenbach level crossing was hit by a train. The scene was also caught on camera.

CFL even notes on its website that "these risks are all the greater, in terms of safety and quality of service, because of the increase in the frequency of trains as well as the increase in road traffic".

To remedy this, CFL is gradually replacing the country's 116 level crossings with other infrastructures. Some 20 have been removed in six years.