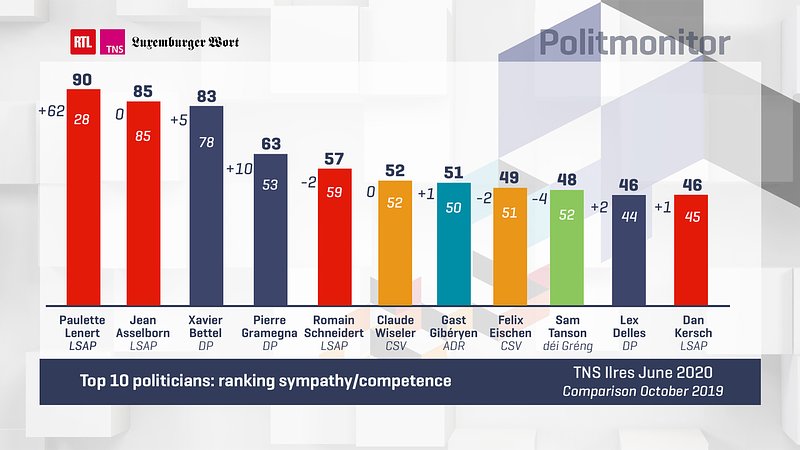 The poll places the LSAP politician and minister of health at the top of the list with 90 points for general appeal and 89 for competence.

Lenert thereby overtakes all other politicians when it comes to general appeal and competence with a score that is even higher than what CSV's Jean-Claude Juncker had accumulated ten years ago. Many others suffered losses in popularity however.

In the last survey, undertaken in October 2019, the minister of health only scored 28 points. It thus seems that the country's citizens are overwhelmingly satisfied with Lenert's handling of the crisis. According to Tommy Klein from TNS Ilres, this rise in popularity is not self-evident, since many foreign health ministers have stagnated in comparison.

The former judge, who had not been voted into the administration, but climbed the ranks of her party nonetheless, is now heading leading both in popularity and competence points.

Her LSAP colleague, Minister of Foreign Affairs Jean Asselborn, remains above average with 85 points, but had to give up the top spot for the first time in seven years. Prime Minister Xavier Bettel of DP scored more points than previously, but remains in third place with 83 points. The survey marks him as more competent (85 points) than sympathetic (81 points). 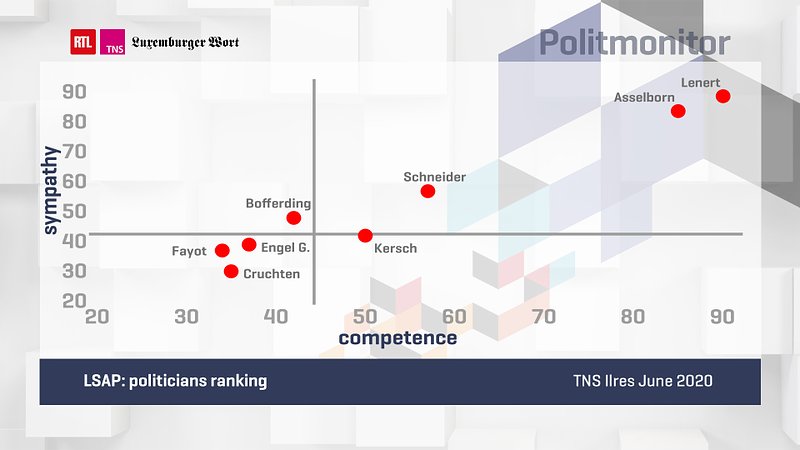 Another survey winner is DP politician and Minister of Finance Pierre Gramegna. He gained 10 points, earning him the fourth spot in the ranking. The state treasurer scored 53 points in general appeal and 73 in competence. He still remains a considerable distance from the top spots with 20 points fewer than Lenert.

It is to be noted that former LSAP politicians Etienne Schneider and Alex Bodry, who had ranked fourth and fifth respectively during the 2019 poll, were no longer part of the current survey. 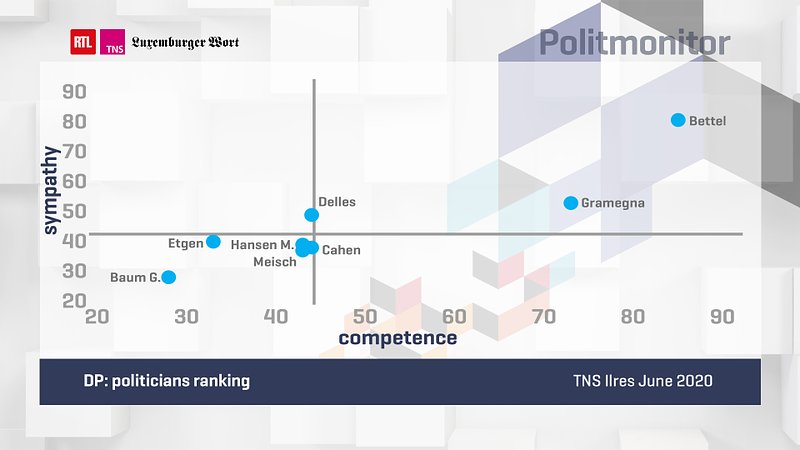 Against all odds, Minister of Education Claude Meisch increased his popularity, but remains far from the top with 40 points. DP party president and Minister of Family Affairs Corinne Cahen suffered a 3 point loss, leaving her with 41 points in total. LSAP Minster for Home Affairs Taina Bofferding is also considered more competent than sympathetic, with a 45 point score in the popularity contest.

Similar to the results of the last RTL Sunday question, déi Gréng suffered the biggest loss in popularity. Minister of Energy Claude Turmes lost a total of 18 points, making him the survey's biggest loser with 29 sympathy points and 35 for competence. Party colleague and Minister for Housing Henri Kox lost 9 points. 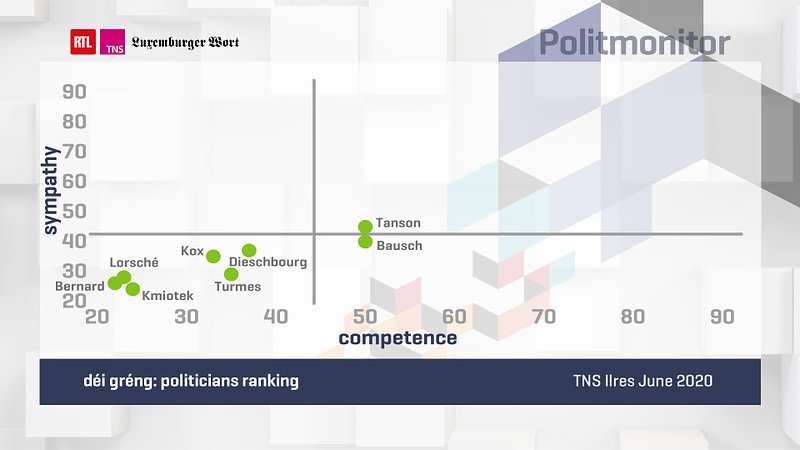 All other party members of déi Gréng that currently hold official positions within the administration suffered losses as well. Minister of the Environment Carole Dieschbuerg suffered a 6 point decrease on top of her 18 points lost during the 2019 survey. Minister of Transportation François Bausch lost 5 points both in sympathy and competence, thereby placing him out of the top ten. Minister for Culture Sam Tanson ranked 9th. Only party president Djuna Bernard remained stable with 24 points.

According to Tommy Klein, the survey should be understood as a negative reflection, since more politicians saw decreases (20) than increases (9) in popularity. Losses were also registered for chamber president Fernand Etgen of DP (7 points) and Minister of Economy France Fayot of LSAP (5 points). Minister for Tourism Lex Delles increased his score by 2 points.

CSV, the biggest opposition party, noted the biggest win in form of deputy Claude Wiseler. The front-runner ranked 6th with 50 sympathy points and 54 for competence. Deputy Felix Eischen, who surprised with a solid score in October, remains in 8th place, but suffered a 2 point drop. Martine Hansen lost 3 points, leaving her with 43 in total, which is still more than CSV party president Frank Engel.

Tommy Klein emphasised in that context that the opposition parties had received less attention over the course of the pandemic than their colleagues within the administration. 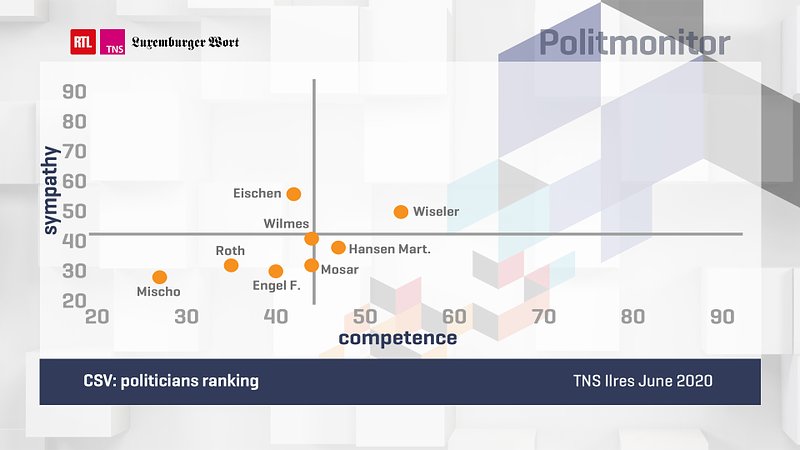 The survey conveys that many politicians suffer in popularity due to reduced exposure in comparison to others. Only 73 participants knew who Baum was. Djuna Bernard was recognised even less, with 67% claiming not know her. In comparison, Xavier Bettel is considered known by 99%.

1,028 eligible voters were included in the survey that lasted from 26 June to 4 July and was conducted via telephone calls. The data was collected in collaboration with Luxembourg independent media authority Alia.lu, who keep a permanent record.