Search
George Floyd Demonstration
© Domingos Oliveira, Fanny Kinsch, Gaël Arellano
The photos published on this site are subject to copyright and may not be copied, modified, or sold without the prior permission of the owner of the site in question.

The "demonstration for justice" was a great success: more than 1,000 people were headed for the US embassy in Luxembourg despite the rainy weather.

The shocking death last week of an unarmed black man, George Floyd, at the hands of police in Minneapolis ignited the nationwide wave of outrage over law enforcement's repeated use of lethal force against unarmed African Americans.

Anti-racism organisation Lëtz Rise Up organised a peaceful demonstration in front of the US embassy in Luxembourg to protest the death of George Floyd in police custody. The demonstration took place in Limpertsberg earlier this Friday.

Protestors chanted "Black lives matter", "I can’t breathe", "no justice, no peace" in front of the US embassy, and were not deterred by the adverse weather conditions.

The demonstration unfolded peacefully and without violence. Coronavirus precautionary measures were respected as the protestors wore face masks covering nose and mouth.

A moving moment occurred when the agitated multitude of protestors kneeled down in front of the embassy - a gesture that has become symbolic since the violent death of George Floyd in Minneapolis. 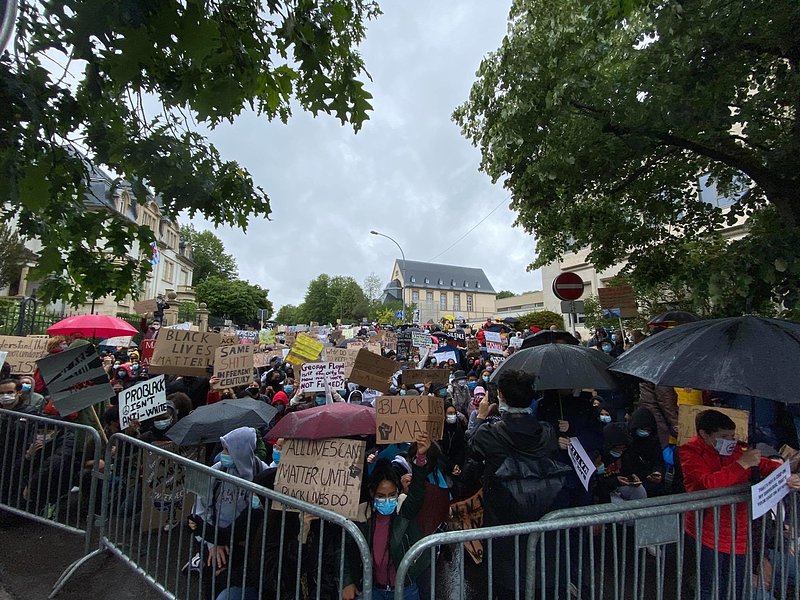 Sandrine Gashonga, one of the organisers of the demonstration, told RTL that she was "very happy" that so many people found their way to Limpertsberg this Friday. "It was supposed to be a demonstration with around 100 protestors and now have a look! There are people of all colours, young and old. That gives me hope," she explained.

Police officers supervised the protest but were not forced to intervene. One of the officers even said he was surprised that the protestors respected the precautionary measures so thoroughly.

All in all, the demonstration was a success - and sent a powerful message: political leaders can no longer ignore racism, which continues sadly continues to thrive in the US and around the globe.

Ambassador J. Randolph Evans has issued the followed statement in response to the protests earlier this Friday:

“I heard you and I thank you for the peaceful protest so others could hear you as well. We, as Americans, must and will continue our efforts individually and as a nation to work toward a more perfect union, fulfilling the sacred commitments we have made to each other in our Constitution equally, fully, and completely.”