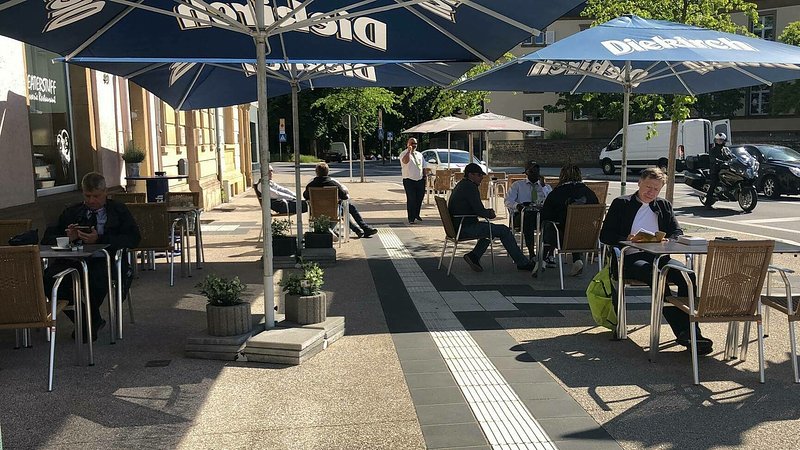 The municipality also stated that owners are not required to pay for their terraces this year.

Terraces were allowed to reopen on Wednesday, and since Friday restaurants and bars can now also welcome customers again. Businesses are happy that they can open their doors again, despite the sanitary measures. However, the situation still remains difficult, especially for those without terraces. The municipality of Luxembourg City has now announced its support for these businesses.

During the last municipal council meeting it was announced that businesses will be able to apply for a terrace which the municipality will then make available to them. Serge Wilmes from the Christian Social People’s Party (CSV) pointed out:

"We have already received about a dozen requests from restaurants which either never have had a terrace, want a bigger terrace, or want to move their terrace to a different place. One specific example that comes to mind would be in Ënneschtgaass, where you have a number of smaller restaurants which don’t have terraces as of yet. We will make a terrace available to them in Ënneschtgaass. Taxi stands will be moved to a different place in order to make this happen, but this was planned anyway. We have received requests, we will process them, and if possible, we will grant them"

Another example for a redesign is in Rue du Fossé where a number of restaurants have put in requests as well.

"Either in front of their entrance, if the pavement is large enough to allow for a bigger terrace, or on a parking space in front of the restaurant, which would then be sacrificed in order to gain space for a terrace. We are well aware that we have to meet these owners halfway to allow them to compensate for the tables they lose inside by putting them outside when the weather is nice. And again, we want to stress that no one has to pay for their terrace this year"

And as for those businesses which are located in an area where it is simply not possible to set up a terrace in front of the entrance?

"For those cases we will try and locate a spot which is not too far off and see if they could possibly set up a terrace there. There are of course some constraints: for instance we have to always make sure that there is still enough space to allow a fire engine or an ambulance to pass through. The terrace should also not obstruct the entire public area, and pedestrians should still be able to walk past. If this is the case, we simply have to look if we can’t set up a terrace elsewhere. We are willing to meet everyone halfway"

Wilmes also confirmed that the municipality has also received requests for terrace extensions from businesses located on traditional squares such as Knuedler or Place d’Armes. He stated that plans have also been developed for these businesses.