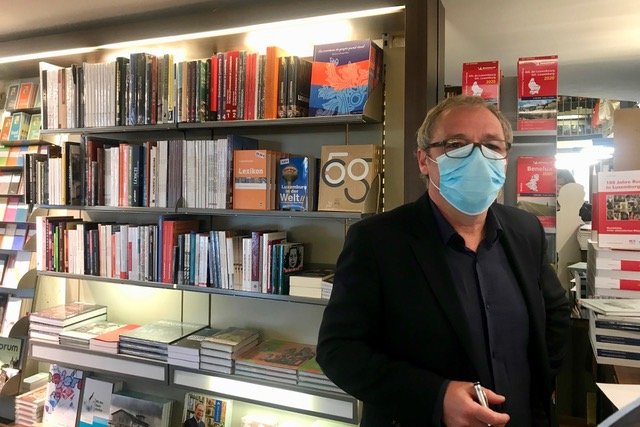 Luxembourg's shops reopened their doors this Monday in what represents a pivotal point in the national exit strategy. New safety measures have been implemented to maintain safety and bring back customers.

"I wanted to symbolically buy one book as soon as possible," Monique told our colleagues at RTL 5 Minutes. She was one of the first customers of the Ernster book store in the heart of Luxembourg City. "It was a serious oversight to deprive us of books and culture but I nevertheless think that the the crisis was well-handled in general," she explained.

Michele was another customer happy to flock back to the city centre this Monday morning. "The shopkeepers are taking the necessary precautions, it's up to us customers to do the same," she explained.

Contrary to what some may have expected, Luxembourg City was not invaded by hordes of shoppers this Monday. Heavy winds and winterly temperatures may have played a role - and many shops decided to keep their closing day this Monday.

Many shops are displaying welcome messages, which are often juxtaposed with posters from the government outlining social distancing and hygiene rules.

"We introduced markings on the ground to indicate the required physical distance, a disinfectant distributor, and cotton swabs so that customers don't have to touch the machine when they enter their [credit card] code," Esada, who works at the Mano shoe shop, told RTL. "We give customers the shoe boxes and let them try on the shoes on their own. We need to get used to not being able to help them," she added.

"Clothes than have been tried on will be steamed and placed into quarantine for a couple of hours," The Kooples employee Léa explained. The shop only counted two visitors this Monday morning, she added.

Pit and Véro Wanderscheid own the "Wanderscheid" food store in Luxembourg City. Due to the pandemic, they no longer offer their characteristic food tastings inside the store but instead focus on the delivery of food baskets. They also put pillows on the ground outside of the shop if customers have to wait before coming in.

Face masks have become a normality in Luxembourg's shops. "It's important to give confidence to customers so that they come back and support local businesses rather than buy online," the president of the city's commercial union, Guil Kaempff explained. According to Kaempff, no shop has filed for bankruptcy yet. The nevertheless lamented that many "several stores, especially those belonging to large chains, have terminated their lease."

He explained that shops in the city had already been negatively impacted by the roadworks. "We'll need help if we want to avoid mass closures."

The president of Luxembourg's trade confederation, Fernand Ernster, had similar words of caution. He explained that several individual municipalities supported shops by waiving ore reducing rent, "but not so the state and only very few private owners." He concluded that "there will be closings" if the shops are not receiving support.

Ernster also showed himself optimistic: "this period allowed us to test ourselves, to improve aspects of our logistics, to look for new ways of exerting our profession." He concluded that the public has also "realised the importance of physical stores" and their social dimension.