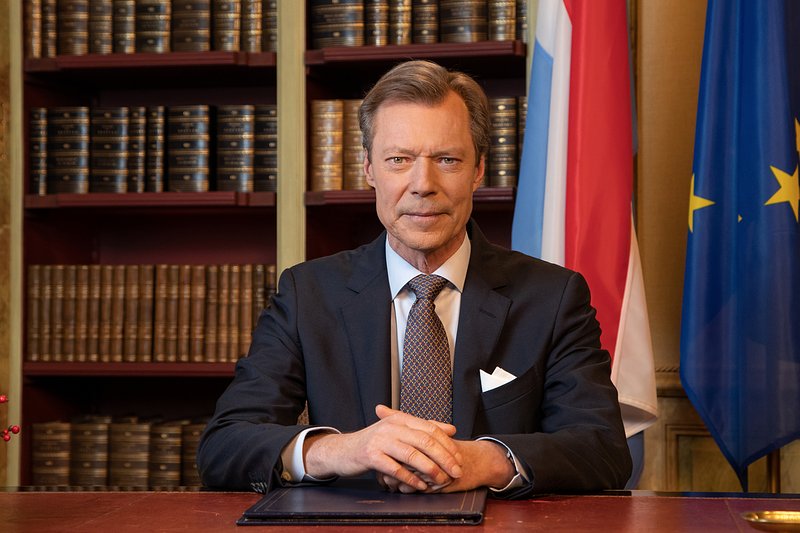 The Grand Ducal court has provided a full transcript of the Grand Duke's Christmas speech. We translated the heartfelt speech into English for you.

Looking back at this year, we can say that it has been marked by many strong emotions.

There was grief, but there was also joy, remembrance, and hope. All of these feelings are very personal and, at the same time, make humans both stand and grow together. We have often proven this as a country. We are able to be happy together, and to grieve together.

The entire country grieved together with the families of the two soldiers of the bomb disposal unit who lost their lives at the ammunition depot in Waldhof after the explosion of a WWII bomb. The remnants of war took a terrible toll in a year in which we were meant to celebrate the 75th anniversary of the liberation of Luxembourg.

Grief is also an emotion that the entire country shared with me and my family well beyond the borders when had to say goodbye to Grand Duke Jean on 23 April, a good and a worried father. The memory of an outstanding and devoted head of state remains.

The whole population was in shock - but also in solidarity - when a tornado left a trail of destruction in the south of the country during the summer holidays.

Today, the Grand Duchess and I feel particularly connected to all those people who were not on the sunny side of life last year.

It was a great pleasure for me to witness the enormous success of the "Stand Speak Rise Up" forum, which was held following an initiative from the Grand Duchess in March. Not only did the forum point the finger at a cruel reality but it also celebrated life and survival.

Thousands of people joined efforts to work through the past and achieve something positive, yes, to make the world a bit better.

It was a great delight and honour not only for the Catholic Church in Luxembourg when Archbishop Jean-Claude Hollerich was named cardinal in Rome.

All of us were also very happy when we received the news that Prince Guillaume and Princess Stephanie will have a child next year.

This year also revolved around memory. Commemoration ceremonies across the country dedicated to the 75th anniversary of the liberation also reminded us how grateful we need to be to the people who took a stand for our freedom and for our values. All too often, their engagement came at the price of their life.

What remains is freedom, memory, and hope that war will never be considered to be a solution again.

Time and again we realise how quickly our world and our environment are changing. Only the ability to adapt, either as an individual or as a collective, allows us to keep pace. This evening, I want to address something that, in my eyes, is just as important for humans: our points of reference and our roots.

Modernity should not imply that we give up our roots, and that we keep track of our identity. The values upon which our life together is founded should not be relativised into something that we no longer recognise.

The human being needs to be able to build his life on a solid foundation, and to have points of reference.

The institutional and democratic framework that we have been working on for for decades gives us great political stability. This framework is also the foundation of freedom of speech, of rights, and of freedom - all of which are guaranteed to all citizens. They are not a given but a valuable achievement worth taking a stand for again and again.

The way in which we interact with each other in our country, in our society, in our families, and with our friends is one of these crucially important reference points that allow each individual to find their place. The family plays an irreplaceable role, even if not everyone is fortunate enough still to have a family. We want solidarity to remain a priority in Luxembourg. We often achieve this - but not always. We can nevertheless be proud that our ability to stand together is tested in important moments. Limits are quickly reached if we stand alone.

Political and moral views as well as philosophical or religious thoughts also contribute to our perception of ourselves not just as individuals but also as part of a whole. Regardless of our pluralistic society's diversity of opinion, the starting points are usually the same:

We can change something about the world,

Progress can be achieved to improve the future.

For these reasons, it is important to have ideals and role-models or at least to believe in fixed values such as respect, compassion, and tolerance for our fellow citizens.

Culture, language and tradition are also important reference points and part of the foundation on which we erect our life together.

Christmas is an important time of the year for many of us. It is a beautiful tradition that we associate with feelings such as joy, love, and memory.

We can be happy and grateful to those people who accompany us on our journey and who are there for us.

Life sometimes confronts us with difficult challenges. It is important in these moments not to give up and despair - but to get back up and move on.

The Grand Duchess, Prince Guillaume, Princess Stephanie an all of our children join me in wholeheartedly wishing you a merry Christmas and all the best for a happy and successful new year.